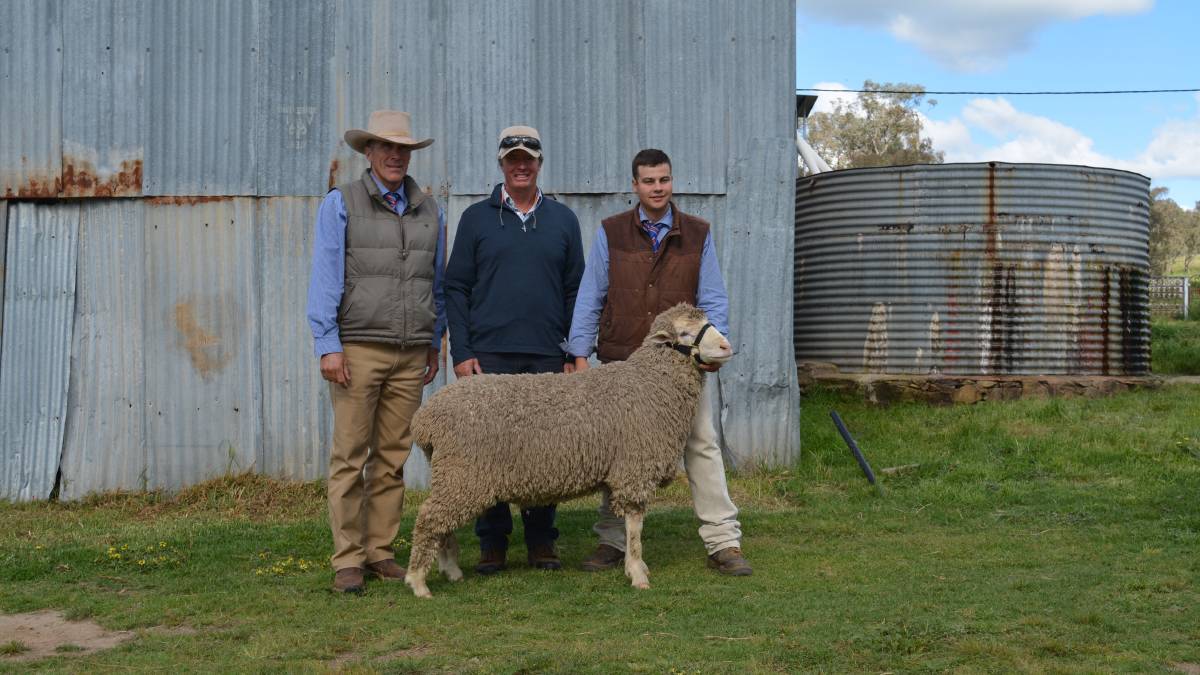 It took the first several lots for buyers to get warmed up at Friday's Glenwood Merinos on-property sale, but the large gallery appeared to be waiting for Glenwood 190030, at lot 9, because prices took off from there.

Held on vendors Norm and Pip Smith's property, Glenwood, Wellington, agency Peter Mills and Company cleared 136 of 140, 2019-drop rams offered at auction to average $3099 in what was the best result yet in the stud's 19 on-property ram sales.

The $12,000 sale topper was an August 2019-drop ram by Glenwood 598, which measured 18.1 micron, that was knocked down via AuctionsPlus to Neil Lawson and family, Cookardinia, through Wagga Regional Livestock.

Second top was the $10,500 Glenwood 191096 which sold to Anthony Glasson, Picarilli Pastoral Company, Thargomindah, Queensland, as one of five rams purchased to average $3950.

Mr Glasson said his family had bought one Glenwood ram about 10 years prior through the Wellington Classic SRS sale, but earlier this year had been impressed by what they saw during the 12 Mile Tour stud open days.

"They're the type we've been breeding, but their skins and wool is what really stood out," Mr Glasson said.

The Glasson's operation is in a 250 millimetre average rainfall area with a mixture of soft and hard mulga country, as well as some Bulloo River channel country.

His father bought the property in 1963 and they have run predominantly Merinos on it ever since, along with some cattle.

Three years ago they built dog exclusion fences around two-thirds of the property and this has allowed them to maintain a joining number of 3000 to 4000 ewes, which average 19.5 micron fibre diametre.

The $10,500 Glenwood ram will be used in a single sire mating to a select group of ewes which are part of a ram breeding nucleus of about 400 ewes.

Mr Glasson said they began selling rams to commercial clients from this nucleus about five years ago and in a couple days time they will also hold their first open day.

"I had a fair crack at him (the sale topper) but I knew I had this fella up my sleeve, so sat back and waited," he said.

Among other buyers, McIntosh Pastoral Company, Molong, bought four rams to a top of $7500, averaging $4375.

Mark and Vicky Murphy, Karbullah Merinos, also made the journey from Goondiwindi, Queensland, and paid $7000 for a 19.6-micron son of Glenwood 512.

Tasmanian buyers were also present via AuctionsPlus, with Glen Hill Trading, Campbell Town, taking two rams, one at $4500 and one at $3500.

The Hardings from Yass also operated via Auctionsplus, taking home six rams to a top of $3000 to average $2500.

Meanwhile, Benefield Farms, Murray Bridge, South Australia, attended the sale and bought two rams, one at $6500 and another at $4000.

The Kisses have used Glenwood rams for about 20 years and are currently joining about 2800 ewes of about 18.5 micron and would usually produce about 130pc lambs, although this year were back to 120pc.

Bruce Kirsop, Gilgandra, bought three lots at auction to a top of $3500 and average of $2250, and later also snapped up one of the passed-in lots immediatley after the sale.

His new rams will be used among his drought-reduced flock of 600 ewes, and in his purchases he targeted a balance between growth, muscle and wool length.

Glenwood principal Norm Smith said this was the most rams the stud had offered was also its best result.

"I wish Jim Watts (SRS founder) was here to see it because it's testament to what he's been teaching us," he said.

He said the interest in the carcase quality and fertility was noticeable this year, which had been improved while maintaining the stud's existing wool and skin quality.

The stud had 160 guests sign in for the sale, and the rams were sold under auctioneers Danny Tink and Tom Pollard, both of Peter Milling and Company, Dubbo.

The story Glenwood Merinos hits $12,000 first appeared on The Land.