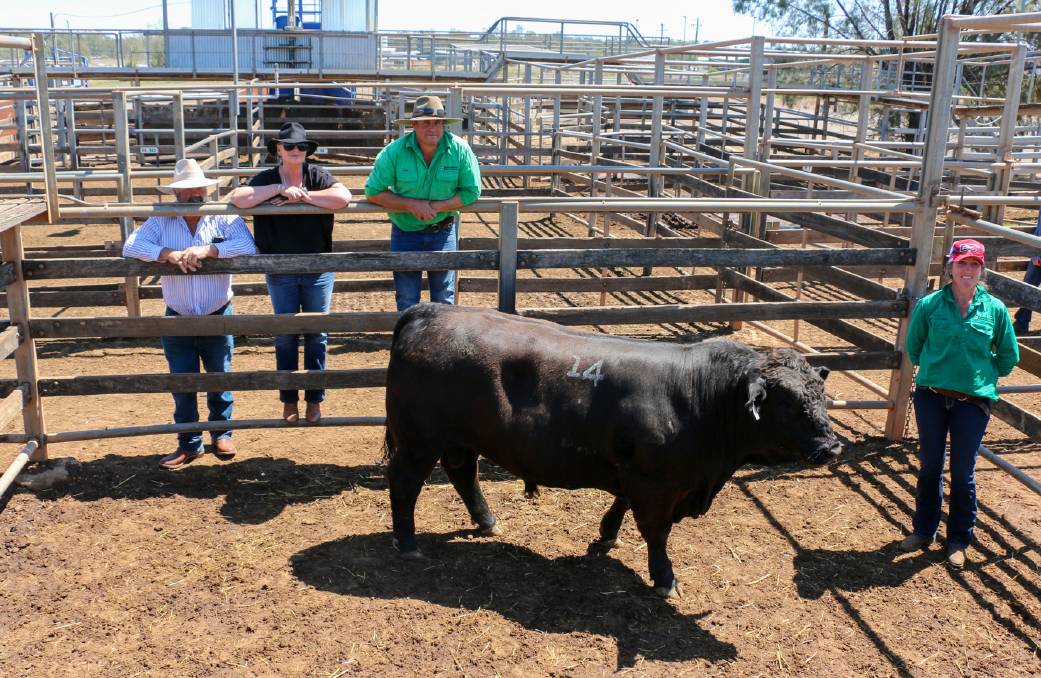 Bonnydale Qld offered 49 bulls at its inaugural black Simmental sale and so impressed were the successful purchasers of the top-priced bull with what was on offer that they travelled all the way from NSW's mid-north to secure him.

His sire, Bonnydale Nevada N160 is the flushed brother of Bonnydale Augustus L84, who set a national record for black Simmentals in 2016 when he was sold for $24,000 to the NSW Wombramurra black Simmental stud.

Bonnydale Q185, one of the many homozygous black bulls on offer, weighed 748kg at 19 months of age, had P8 and rib fat measurements of 15mm and 13mm and intra-muscular fat of 5.8 per cent.

His purchaser, Nick Laurie, who breeds composite bulls, has been using black Simmentals for five or six years, saying he thought they did a better job for his purpose than Angus genetics.

Mike Introvigne, speaking on behalf of the Bonnydale stud in Western Australia, which is partnering with Jake Berghofer and Emma Patterson to operate Bonnydale Qld, said the young sire was more muscled than Augustus, and was a more moderate early maturing bull.

"We've received a lot of positive feedback over the phone on the sale today - we'll definitely be holding another one," he said.

Bonnydale already has a number of Queensland clients, from the Mackay, Springsure, Blackwater, Dingo and Injune regions, which made a sale at Roma a logical central point, he said.

Queensland partner Jake Berghofer said no-one knew what to expect for a first sale, but he was excited to see bulls from their Queensland program getting out to grow their reputation.

It was a momentous day for Mr Berghofer and Ms Patterson, based at Kingaroy but with country at Toogoolawah and Eulo as well, who had to battle through terrible drought conditions to keep their foundation stud animals alive.

Also homozygous black, he weighed 834kg and had an EMA of 135sq cm.

The Franz family, Main Creek Pastoral, outlaid $9000 for a straight black Simmental as well, Bonnydale Q Lincoln P54, who had similar statistics - a weight of 846kg and an EMA of 136sq cm.

Foyleview Pastoral at Mitchell were keen bidders, securing five bulls to a top of $8000, two black Simmental, two Superblack and one Simangus, the latter one of four bulls sold after the fall of hammer.