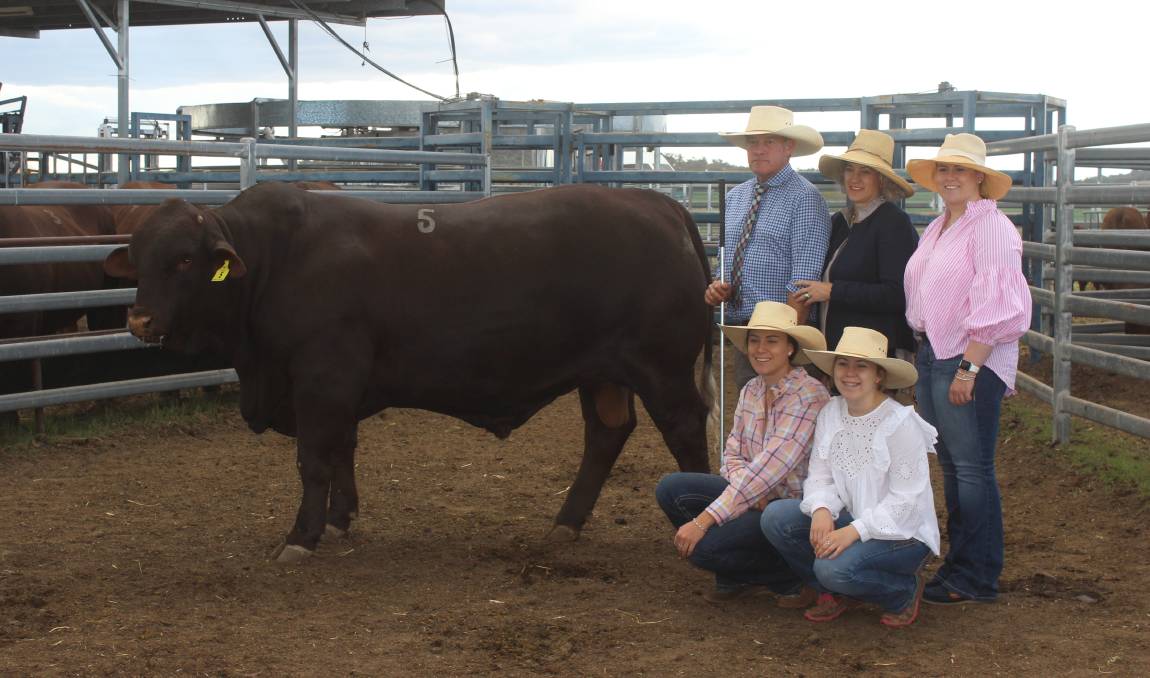 This new record eclipsed the previous record of $110,000 set for the breed by David and Suzanne Bassingthwaighte when Waco Queenslander Q384 (PS) sold for $110,000 at the Yarrawonga Waco sale near Wallumbilla and bought by Rob and Lorraine Sinnamon, Yulgilbar Pastoral Company, Baryulgil, NSW. last Thursday.

At 26 months of age Glenn Oaks Palo P1211 (PS) is from the prolific breeding matron Glenn Oaks Harmony H36 weighed 1040 kilograms and has an eye muscle area of 139 square centimetres.

Mr Dunlop said both he and Howard loved him from when they saw him at the Santa Central Open Day in August.

"We both felt he was everything that we both needed to take us to the next level, so we joined forces, and together he was the worth the extra stretch for us to secure him.

Mr Dunlop said he had been the losing bidder on his sire Warenda Kilimanjaro K4 (P) in 2017.

Glenn Oaks Palo (P) will head to the Court's family Glenalbyn Stud at Wellington, and the partnership will initially join him with 20 females each.

Glenn Oaks Penfold P1261 (PS) was also by Warenda Kilimanjaro K4 (P) bred by Mrs Kirkby, and she secured him due to his length, and muscle pattern.

"Overall he is one powerful bull, I believe," she said.

Scott Ferguson said he and wife Wendy and family were delighted and humbled by the buying support.

"It is very humbling to know a lot of our buyers were repeat buyers and the fact we managed to re-write history in such a short time," Mr Ferguson said.

General manager of the Santa Gertrudis Breeders Association Chris Todd said there have been some phenomenal sale results from this year's selling season with most results enjoying 90 per cent clearance rates and the averages up by 30 pc on last year's result.

"The commercial cattlemen are returning to the purebred Santa bloodlines to give weight and profit in their cattle, with most bull sale catering to all budgets and price range."

Queensland Country Life will have a full sale report in next week's issue.