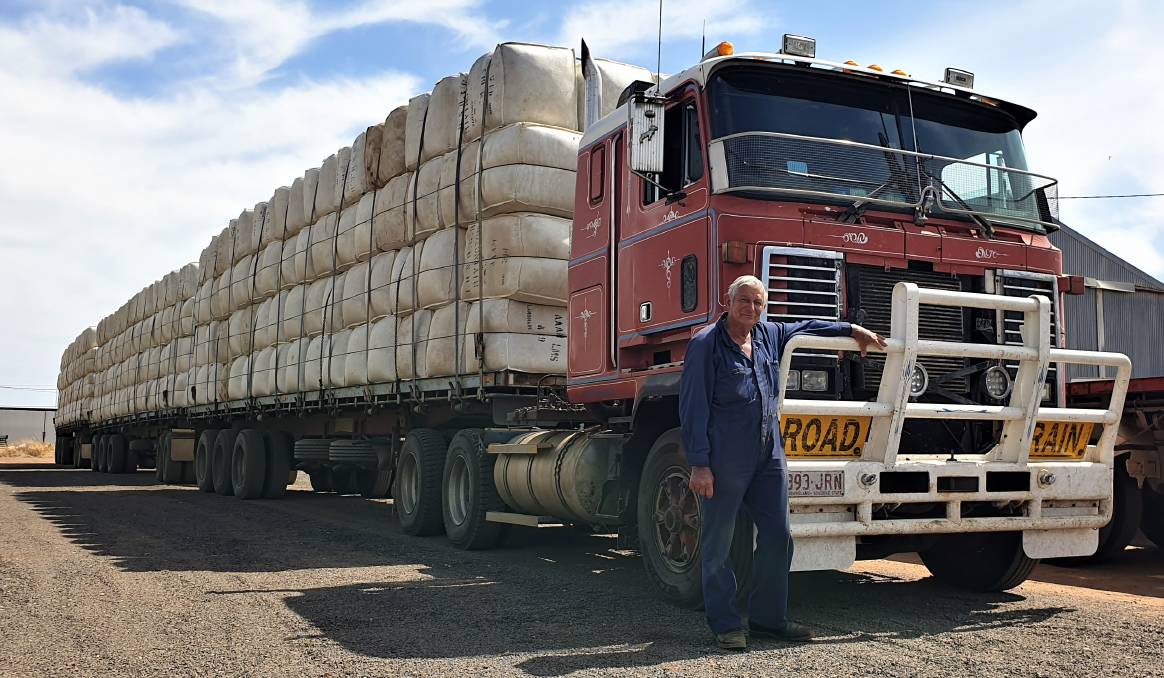 Nev Noske started driving trucks at the age of 17, and hauled his first load of wool out of Star Downs at Hughenden.

He started driving trucks at the age of 17, and hauled his first load of wool out of Star Downs at Hughenden.

Sixty years later, Nev Noske wouldn't like to guess how many bales he's carted or how many miles he's covered.

He and his red Mack Ultraliner prime mover have become an iconic sight in western Queensland and the stories about him are only matched by the ones he and his Blackall offsider Stan Haughton love to share.

One of the best is the day a bale popped out of the fourth tier of a load, bouncing onto the Barcoo River bridge before falling into the water below.

"I flew across the bridge and grabbed the wool hook - I had to get in the water - and pushed the bale to the bank and rolled it up," Nev recalled. " I brought it home and stood it up to drain the water out of it - I got it out quickly, it never got saturated."

It was checked at the wool store in Brisbane before it was sold, and no-one was the wiser until Nev confessed to the owner.

Related: Wool away from the central west

There's plenty of places he's been bogged for weeks - down the Adavale Road, south of Hughenden, and weeks at a time at Clara Creek between Augathella and Morven.

On one occasion he took a dolly trailer out to Blackall property Mt Harden, leaving it propped on a set of legs for the property owners to load bales onto as they rolled out of the shed.

The only trouble was, it rained 325mm or 13 inches one night.

"They loaded the trailer right through but it sank so far that the front of the steel rail was nearly in the dirt and the back wheels were off the ground," Nev said.

It meant unloading it all and jacking the trailer up to repack the whole load. Nev hooked up three trailers to collect wool from various properties, where there were people on hand to facilitate loading, but he only takes two trailers at a time south to Brisbane.

Isisford and Longreach woolgrower John Beattie has used Nev Noske Transport for 20 to 25 years and described him as a master at loading wool.

"The fact that we continue to use Nev says it all," he said. "You like to have trust in the person looking after your wool and half the battle is having someone interested in the process."

Nev was inducted into the National Road Transport Hall of Fame in 2009, where the citation said he was taught to drive in a Commer Knocker at the age of 17.

His first day of wool hauling, loading 105 bales for the Terrys at Star Downs, was the hardest day's work he'd ever done, because he wasn't prepared for the manhandling involved in manoeuvring 190-200kg bales.

In 1972, he carted 14,443 bales from the Charleville district to Brisbane, eclipsed in 1998 when he moved 22,000 bales from around the central west to the wool stores. Last year he estimates he might have moved a total of 5000 bales from western Queensland.

Nev does all his work with a Mack Ultraliner V8 1988 model, which he's put two million kilometres on.

He's also proud to use McGrath trailers, which stopped manufacture in 1986, because the maker was his uncle.

"I bought the last three trailers made," he said.