The Millear family continue to breed Merino sheep based on the family Merino heritage. 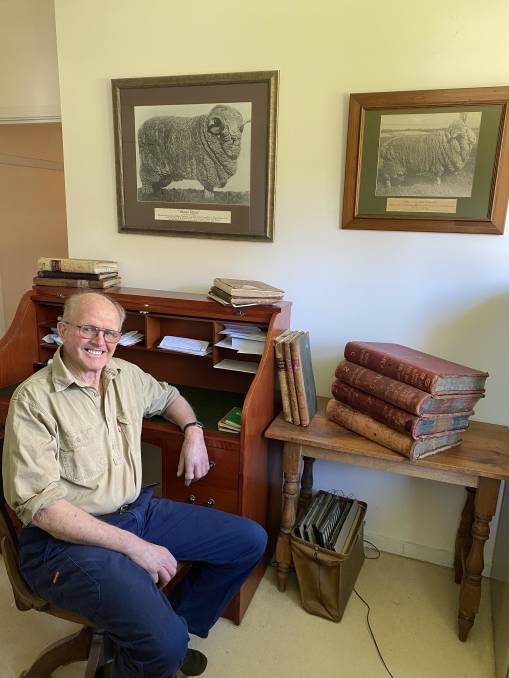 Tony Millear with photographs of Merino rams in his office. Photo: Sarah Millear

The walls of the office on the Millear family property Eastleigh, Willaura are hung with many framed photographs of valuable and prize winning Merino rams bred by Tony Millear's grandfather Thomas Millear Junior.

I claim for our sheep, size, weight of fleece and value per head combined, to be ahead of any other breed in Australasia - Thomas Millear junior (1906)

Various stations with proud Merino heritage are similarly adorned with examples of past and current breed champions: but there are few who can boast the lineage of Merino sheep whose genetics influenced the wider pastoral industry.

Pride in his family's Merino heritage sits easy with Tony in the Western Districts of Victoria where he continues to graze Merinos descended from those his grandfather bred: and with his son Pat running Stud Park South at Edgarley, the influence of the family on the direction of the Merino will continue.

One of those framed photographs is of the ram named Donald Dinnie bred at Deniliquin Stud Park, Conargo, in 1904 by his grandfather, and so-called in honour of one of the greatest sportsman ever to compete in Scotland.

Donald Dinnie - the ram's namesake - was considered the greatest athlete of the late 19th century.

The Scottish-born athlete excelled at sprinting, hurdles, long and high jump, pole vault and caber tossing and was considered capable of winning gold medals if the Olympic Games had been held before 1896, by which time he had passed his peak performance.

It was the first time a ram was sold in Australia for more than one thousand guineas.

That three-year-old ram was named Donald Dinnie and was bred by Thomas Millear junior at Deniliquin Stud Park, Deniliquin, which was an offshoot of the Wanganella Estate stud.

Wanganella Estate (now referred to as Peppinella) was the Millear property after the partnership was dissolved in 1894 and which the family held until purchased by F.S Falkiner and Sons, Boonoke, Conargo in 1910.

Thomas Millear, junior kept impeccable records of his sheep breeding ambitions throughout his career and in 1906 he sold Donald Dinnie to the South Australian-based stud Canowie Estate founded in 1839 by Drs J.H. and W.J. Browne, but managed by Alex McDonald at the time of the ram's purchase.

In his seminal work, The Australian Merino, author Charles Massy described McDonald as an 'excellent studmaster and intuitive breeder' and it was his decision to introduce Peppin-blood sheep to the South Australian stud, which ultimately changed the fortunes of Canowie Estate.

The Canowie stud was also described as one of the largest and most influential studs in Australia: all due to the genetic influence of Donald Dinnie.

The ram proved to be extremely prepotent, nicking with the South Australian-bred ewes at the time, to the extent the Canowie stud was eventually a virtual Donald Dinnie flock.

In a letter Thomas Millear junior wrote to the journal, American Sheep Breeder, he commended the performance of the rams bred in his stud.

"I claim for our sheep, size, weight of fleece and value per head combined, to be ahead of any other breed in Australasia," he wrote.

"I do not breed for heavy conditioned greasy fleeces. Australians had a craze for that, but the time is past.

"What we now go for is return per head - fleece and carcass - and not a wrinkly sheep for they cannot tussle for themselves in bad seasons when they have to travel long distances to water."

Indeed such were those flock characteristics inherent in Donald Dinnie, Charles Massy described a heavily developed and beautiful-looking sire, with a big underline and great lock development.

In later years progeny of Donald Dinnie were virtually unbeatable at shows: and his sons were keenly sought by studs in Western Australia, South Australia and South Africa.

He was the leading sire at Canowie for ten years, during which time he sired more than 1000 lambs.

In his first joining at Denilquin Stud Park before being sold to Canowie Estate, Donald Dinnie sired another record priced ram named Sir William which was bought in 1907 by the Executors Late Sir William Clarke, Cobran, Deniliquin, for 1350 guineas ($224,000 in 2019).

Successful ram sales on behalf of Canowie included a ram by Donald Dinnie and named Jack Johnson, sold during the 1912 Royal Adelaide Show to South Africa for 800 guineas ($104,000 in 2019).

It was a record price for a South Australian-bred ram: while a South African-based stud at bought another son of Donald Dinnie, the champion during the 1910 Royal Adelaide Show for 450 guineas ($66,000 in 2019).

Like his namesake, Donald Dinnie was renowned during his stud career but he was also, by contemporary standards, a big sheep with prodigious wool cuts.

He measured with ten months wool growth from the point of his nose to the square of his tail 132 centimetres, 167cm girth and 81cm in height.

In prime condition, Donald Dinnie weighed 120kg and during his life he grew a total of 145kg wool in ten years, and his last fleece weighed 13.1kg.

The story A proud heritage first appeared on The Land.