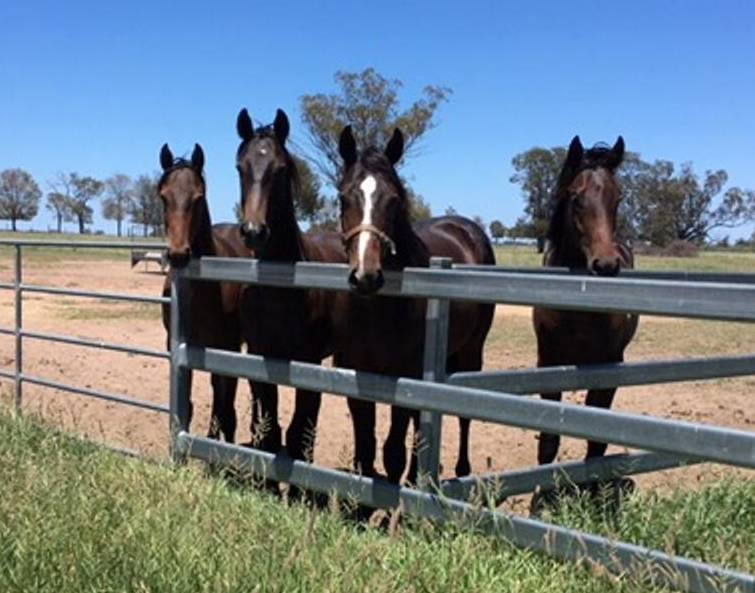 INQUISITIVE GUY: Rothfire, white blaze, would watch from his paddock as Jill Gleeson would walk down from the homestead.

There's a charitable streak longer than a country mile running through Wally Gleeson, the man behind the horse behind the headlines.

THERE's a charitable streak longer than a country mile running through Wally Gleeson, the man behind the horse behind the headlines.

Gleeson and his family run a breeding operation out Chinchilla way and while theirs might be small compared to others, Gleeson Thoroughbred Connections is in the news for all the right reasons.

Superslick Rothfire, winner seven times in eight raceday appointments, is a GTC product from the white snip on his nose to the butt of his tail.

Form students wax lyrical about the young gelding's prospects in the $15 million The Everest in Sydney in mid-October as punters start swarming and corporate bookies steel themselves for a betting onslaught.

Rothfire's 20 owners have already done quite nicely with more than $860,000 in prizemoney in the bank and victory in The Everest would tip a few million their way.

Gleeson, a handy horseman who once won two Corinthian Handicaps for amateur riders, hopes for the best for Rothfire's connections.

"I am so pleased for the people who are in him," Gleeson, says, all too aware others think the mega payday would be his had he retained Rothfire.

"Our racing model is that we race a lot of fillies but don't race any geldings or colts. Good luck to them and I can only wish them the best."

After Rothfire (Rothesay-Huss On Fire-Hussonet) stretched his winning run to six in the Group 1 JJ Atkins (1400m) at Eagle Farm on June 6, Gleeson admits things changed.

GTC was noticed with the Gleesons inundated with text messages, phone calls and emails, an episode happily replayed in full last weekend when Rothfire won the Run To The Rose in Sydney.

But the Rothfire story hasn't been all beer and skittles. His mum, bought for $9000, cut her leg and died from a subsequent infection when Rothfire was young.

As a youngster Rothfire was, according to Gleeson, just one of the pack except for an inquisitive nature. As well the Inglis group and Magic Millions thought his pedigree was weak and excluded him from their sales.

"Funny thing I've always liked Huss On Fire's bloodline because it's not often you get a lineage like it with a Hussonet mare out of a Zabeel mare out of a Marscay mare," Gleeson added.

"I was a butcher and when I retired we started a little breeding venture and Huss On Fire was one of our first buys.

"We have a full sister (Smokin Hussay) to Rothfire and she's been covered by Pierata and a half-sister to him by Sizzling is in foal to Flying Artie, so we still have the bloodline.

"Just lately we've been on a roll with a winner at Roma, one on the Sunshine Coast, another in NZ and Rothfire in Sydney."

Maybe they'll be headliners, too.