They breed them better up north and today the Yarrawonga and Waco Santa Gertrudis studs proved just that.

The Bassingthwaighte families once again set a breed record top price, this time at a whopping $110,000.

Mr Sinnamon held his nerve until the action slowed at the $80,000 mark, entering the fray with a $85,000 bid and quickly accounting for the lot 18 bull which entered the ring first.

At 23 months of age, the son of Waco Addictive F1090 (PS) tipped the scales at 940 kilograms with an eye muscle area of 140 square centimetres and a scrotal circumference of 41cm.

Described by vendor David Bassingthwaighte as a complete package, the sire prospect had P8 and rib fat measurements of 10mm and 8mm respectively, and an average daily gain of 1.24kg.

It was a one-and-done kind of day for the Sinnamons, who made the trip specifically for the sire prospect.

"We were contemplating not coming up originally, then we saw the video online and decided it was worth coming to have a look," Mr Sinnamon said.

"I expected in the current market situation that he was going to be expensive, a little bit more expensive than I thought, but I think bulls of that quality don't come around very often and I think he's worth the investment." 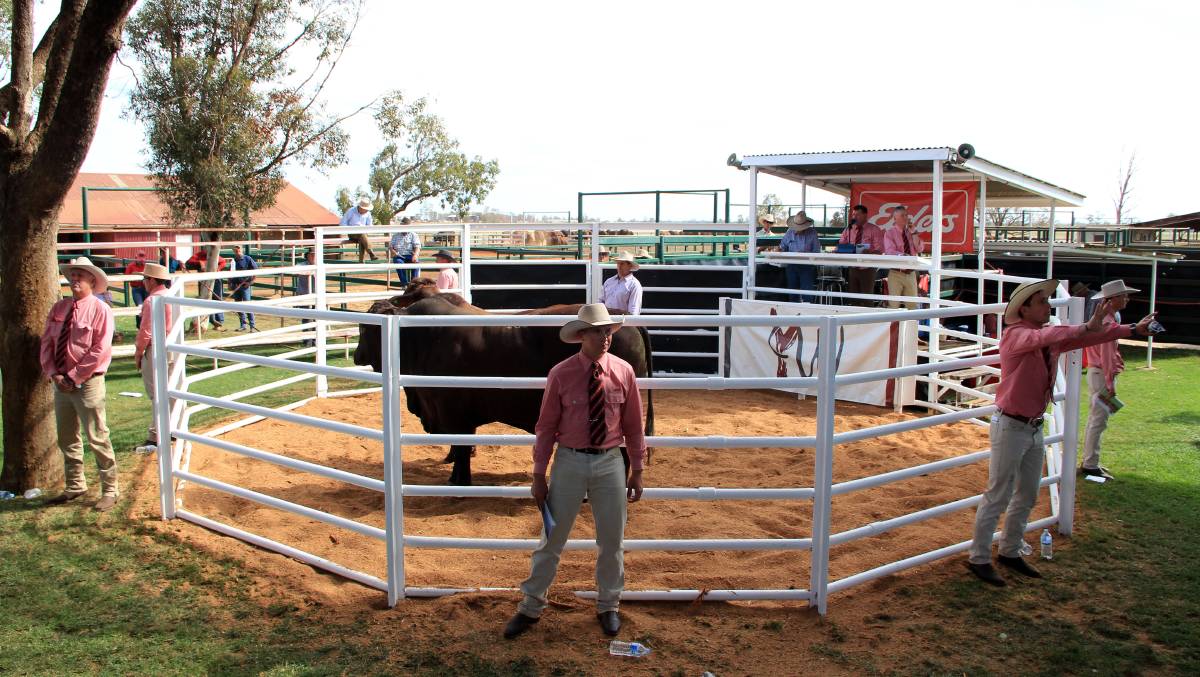 There was spirited bidding throughout the sale for the 177 bulls on offer.

New genetics for the Yulgilbar operation, Waco Q384 (PS) caught their eye for his commercial relevance to what the industry wants right now.

"He was a complete balanced sire, structurally correct, very fluent movement, reproductively well developed, good sheath and has that tropical skin type that I really look for," Mr Sinnamon said.

Semen will be collected to be utilised in an AI program straight away, and then 'Queenslander' will be put to cows naturally as well.

The record was the icing on the cake of an otherwise hugely successful sale for the families.

Sitting on the facing page to the top seller in the catalogue was the second-top priced bull at $60,000. The appetite for the Yarrawonga Waco line-up never wavered with all 177 bulls being accounted for in less than three hours, by way of the 58 successful buyers from the 100 registered bidders.

With a spread from Mt Garnet in north Queensland to Cobar in central western New South Wales, repeat buyers made their presence known.

David Bassingthwaighte said they were thrilled with the result and the support from new and return clients.

The sale was conducted by Elders, with Michael Smith, Elders, and Cyril Close, TopX Roma, taking the bids.