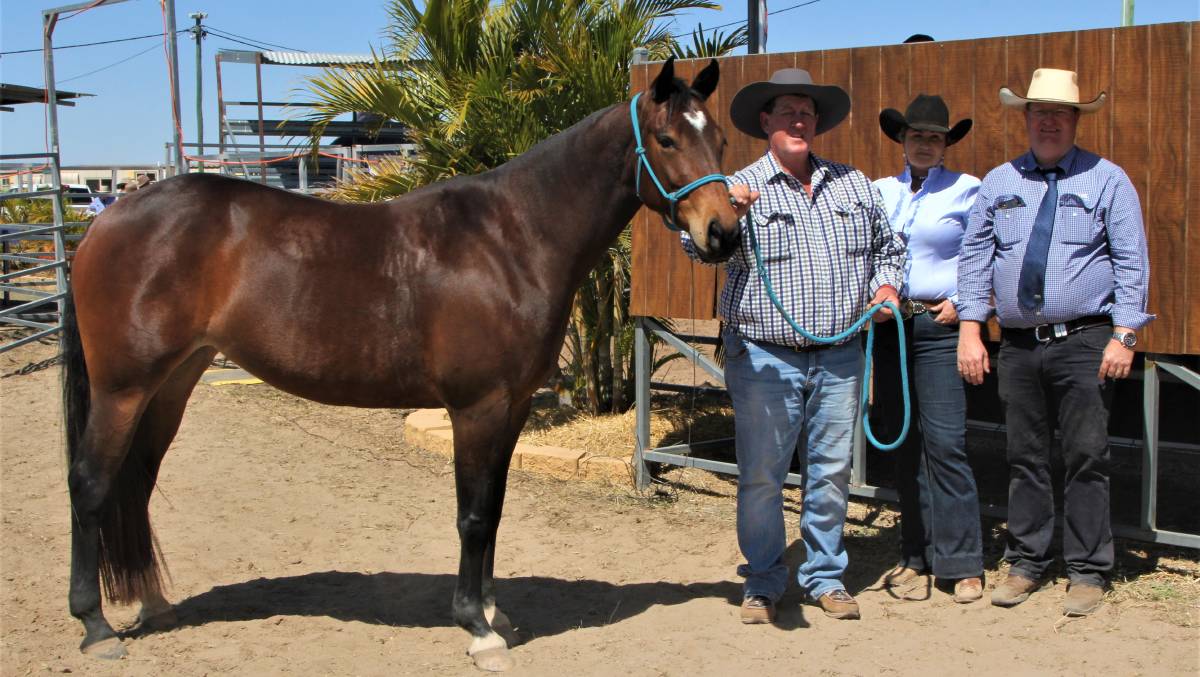 The esteem with which Mark and Joanne Smith's Weatherford Equine business is held in the horse world was evident at the Ag-Grow 2020 premier ridden horse sale on Saturday, when they sold both the top-priced mare and gelding.

The esteem with which Mark and Joanne Smith's Weatherford Equine business is held in the horse world was evident at the Ag-Grow 2020 premier ridden horse sale on Saturday, when they sold both the top-priced mare and gelding.

In what was the Emerald couple's first appearance at the well-known sale on their doorstep, their five-year-old mare Miss Valerie sold for the sale's top price of $18,000 to 7W Grazing at Barcaldine, while their four-year-old gelding Smooth Cruzin was purchased online by Mandy Curran from Longreach for $17,000.

Both horses were embryo foals from the same dam, Docs Cruz, who has bred numerous campdraft and cutting champions.

Paul Weir, Bellevue Station, Barcaldine was the purchaser of the 14.3hh Miss Valerie, who was sired by Destiny's Mr Chic, and he was approached post-sale by a number of people keen to campdraft with her.

"We wanted a horse with good breeding that tracked well and that had something behind her," Mr Weir said. "We've not bought this line before but she's a good versatile mare, and she's got her whole future in front of her."

Mr Weir said they would use her in station work and would likely do some drafting as well.

He also purchased Salty Misty (HSH), a three-year-old mare broken in in February, from Gin Gin's R and D Salt.

The impeccable breeding of Miss Valerie's half-brother Smooth Cruzin, as well as the training foundation laid down by Mark Smith, is what attracted Mandy Curran to the 14.3hh chestnut gelding, fighting off seven other bidders in the process. 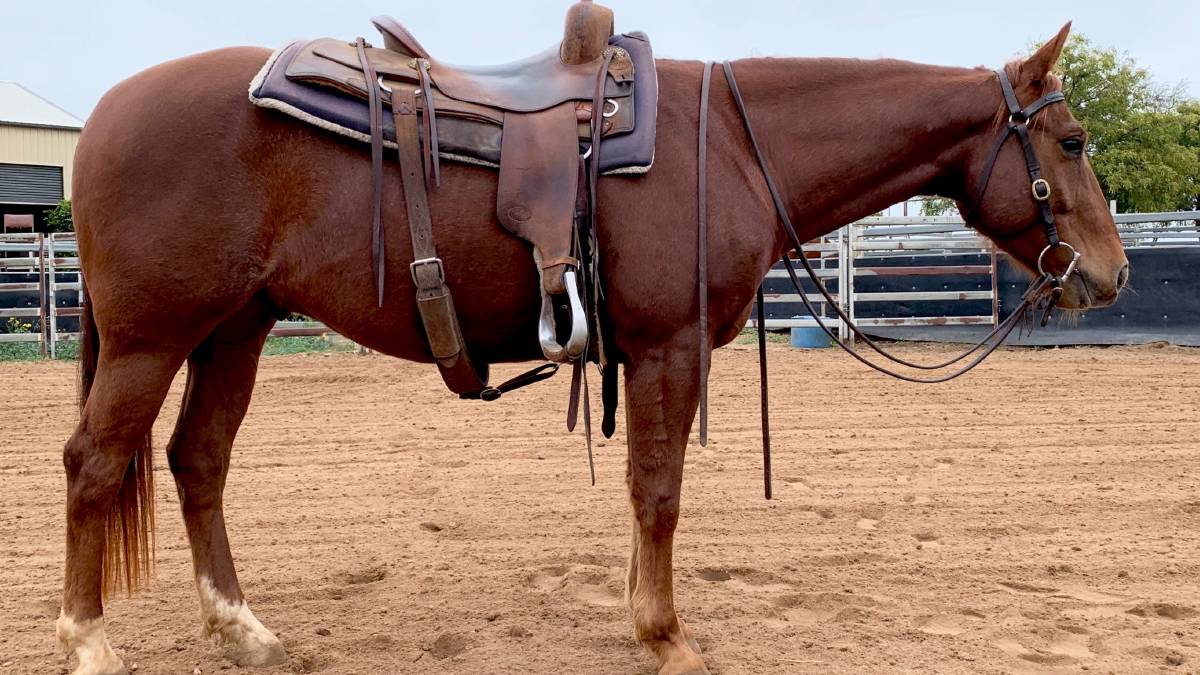 Smooth Cruzin sold for $17,000 to Mandy Curran, Longreach, and was the sale's top-priced gelding.

"The Smiths are very well known in the equine world for cutting and for Jo's work as a vet, and this was a beautiful quiet horse," Ms Curran said.

"The drought has meant we've had to sell some horses but it's also an opportunity to replace them with quality like this.

"This is a one-off purchase of what we consider a lifetime horse."

There were just over 60 registered bidders on the grounds, which he said was a little less than usual, but that was boosted by 106 registered online via Elite Livestock.

"They were all very genuine bidders for solid working horses," Mr Duthie said. "There was a good bottom in the market."

Two of those travelling a long way on Saturday to watch the horses work on the ground and make purchases were Annette Masterson and daughter Louise, from Wyandot, Mt Garnet, who each made successful bids.

Louise paid $10,000 for four-year-old gelding Barnacle, offered by Brad Knight, Taroom, saying he was one of her favourites on the Facebook social media videos.

"He looked like a free-moving horse and he stepped up to the mark in the ring," she said.

"Barney" placed third in the 2019 Bauhinia Futurity Campdraft and had been doing steady mustering work.

It was the first time the Mastersons had made the nine-hour drive down to the Ag-Grow sale, explaining that there hadn't been many other horse sales to attend this year.

The drive was also a success for Annette, who paid $11,000 for seven-year-old gelding Camelock Nitro from Camelock Rural, Augathella, who was prepared for sale by Cody O'Neill.

The sale opened with the $11,000 purchase of Excee Breeze (HSH), a black mare offered by Emerald's Peter Bonython who was sold to GM Pedersen and Son of Rolleston.

The Pedersens bought three horses in all, outlaying a total of $40,000, including $16,000 for Superact Epic Boom, a six-year-old gelding offered by Tom Acton, Rockhampton, and $13,000 for another of his geldings, Superact Alcatraz, a grey roan five-year-old gelding. 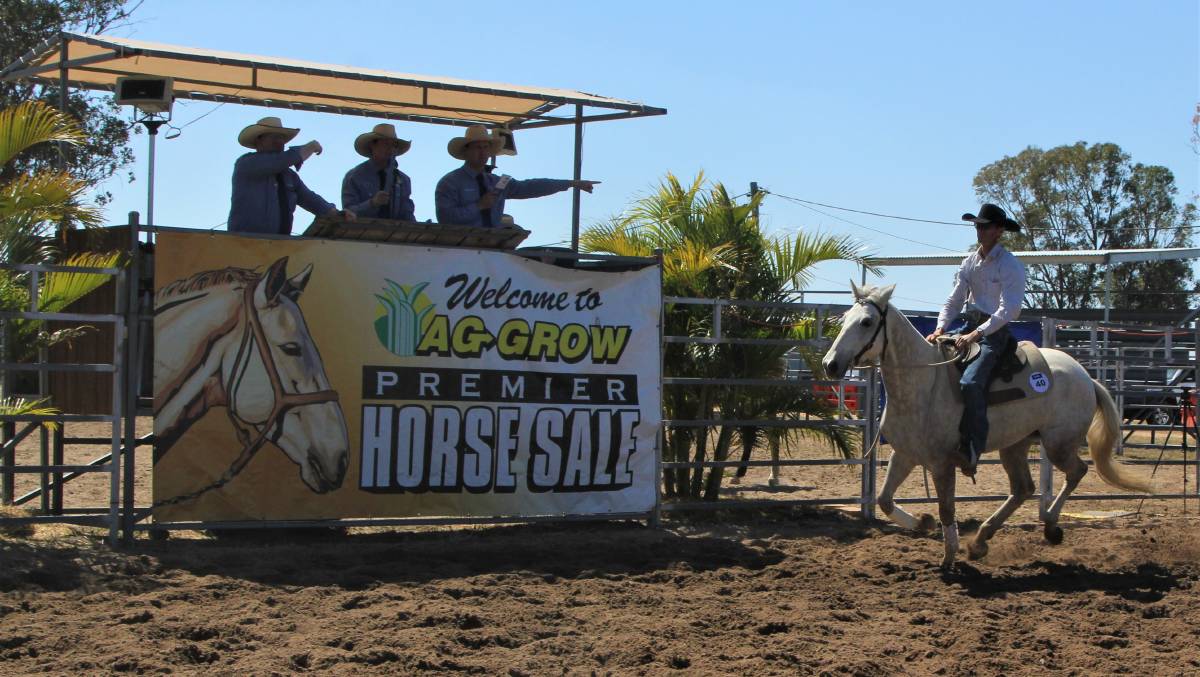 Grey gelding Superact Alcatraz going through his paces in the sale ring, being knocked down to Pedersen and Son, Rolleston, for $13,000.

Another of the volume buyers was Oakdale Pastoral from Blue Mountain, west of Sarina.

They paid $33,000 for four horses, including $9500 for Peter Bonython's Green Wattle Duchess (HSH), and $8000 for Coolum Pixie, a heritage-bred ASH mare on account of Ian and Donna Atthow, Millmerran.

They also purchased bay gelding Aussies One Time for $8000 from Lawson Woodard, Dingo, and three-year-old mare Brooke for $7500 from the Woorabinda Pastoral Co at Duaringa.

The Maguire Cattle Co at Dingo paid $12,000 for Sevenpines 1 Que, a four-year-old chestnut mare offered by Cody and Stephanie O'Neill, The Willows.

P and L Comiskey, Alpha knocked back $13,000 for roan eight-year-old mare Havanna, sired by RS Chisum and whose dam is Tikis Rose Lawson.