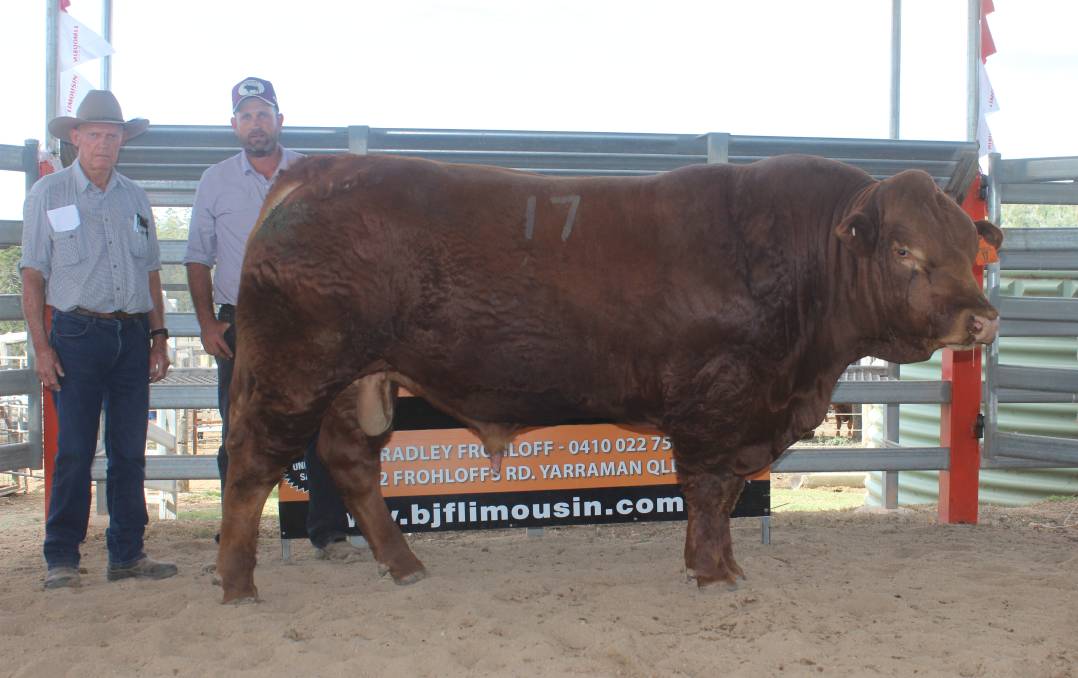 Commercial cattleman Laurence Hack, Alpha, and David Eagleson with Ulster 1 Peyton who sold for $27,000 at the BJF Limousin Invitational Sale near Yarraman.

A Queensland Limousin auction sale record of $27,000 was set at the BJF Limousin Invitation Sale near Yarraman on Friday, when Ulster 1 Peyton (2P) sold under the hammer.

With bidding opening at $5000, Aussie Land and Livestock auctioneer Midge Thompson didn't take long to accept $1000 bids around the ring, that quickly added up to $27,0000.

Mr Hack and his wife Pat join 800 Euro-cross breeders on both Rocklea and Prior Park turning bullocks off onto the Japanese market.

Mr Hack said Ulster 1 Peyton was an exceptional bull in every way including confirmation and temperament.

"He took my eye when I received the catalogue, and I wasn't going home without him," Mr Hack said.

The couple catalogued a "pick of the pair" offering two beautiful embryo heifers by the highly sought after Greenwood PLD Zambuka.

"We are delighted with the overall sale result and we certainly received true value for the quality cattle we presented.

Queensland Country Life will have a full sale report in the next edition. Darren and Shelly Hartwig, Gold Crest Limousins, with vendors Peter and Pauline Grant, and Corey Evans, Aussie Land and Livestock, with the 'pick of the pair" heifers. The Hartwigs selected The Downfall Kaye Queensland Q10 (lot 48) leaving the Grants to retain her sibling Q11.