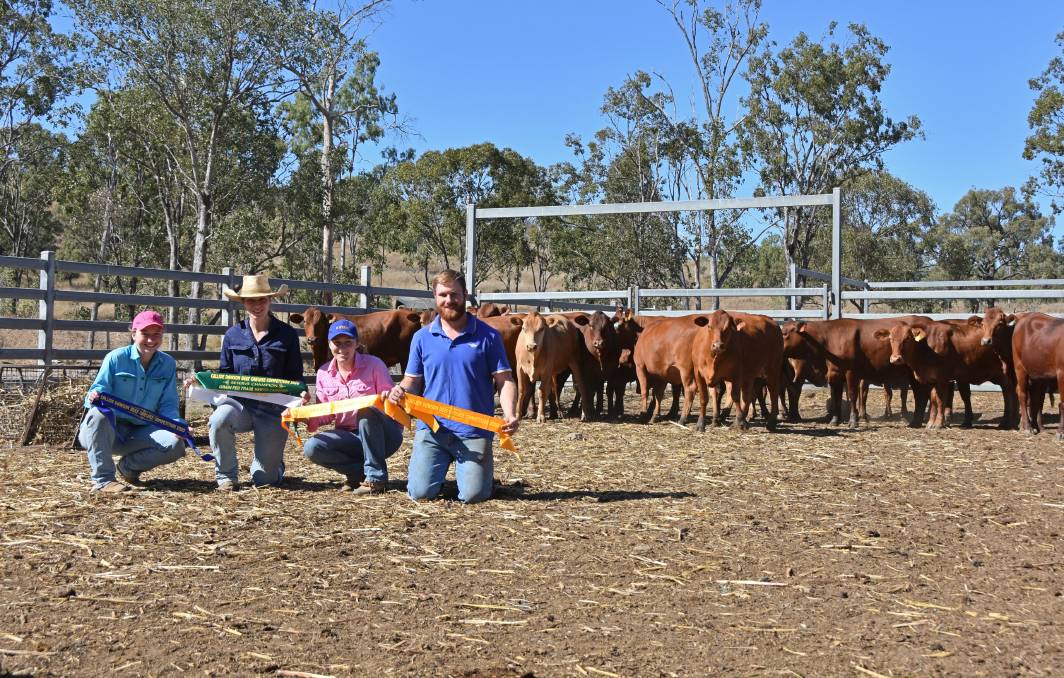 The Maynard family have been longtime supporters of the Callide Dawson Beef Carcase Competition, and in the past 12 years they have claimed ribbons for highest feedlot growth rate 11 times.

In spite of their achievements, Geoff Maynard modestly puts much of their success down to luck.

"We can't be boastful and say we've got it worked out because we haven't," he said.

"All these competitions, as anyone would know, it's about a fair bit of luck."

Geoff and Alison Maynard, along with their five children, run a genetics operation across five properties totalling 10,500 hectares in the Callide Valley, breeding Senepol and Belmont Red bulls.

"We have traditionally been selecting out of 1200 performance recorded breeders, but the last two years have knocked those numbers back to about 800," Mr Maynard said.

"We do anticipate this year we will be back up over 1000 breeders, assuming the season is good."

Interestingly, the traits the family is breeding for don't necessarily show up in the feedlot, but the temperament of their cattle is what Mr Maynard puts their success down to.

"The first thing that we're looking for is that quicker re-breeding which doesn't show in that feedlot setting," he said.

"The other thing that goes hand in hand with the quicker re-breeding is also the ability to cover.

"We try to push growth and muscle without losing too much; without getting high growth and too lean."

Of their 10,500ha, almost half of it is forest country at Mt Eugene, Jambin, and Mr Maynard said the tough conditions in which the cows are breeding prepares the progeny for their clients in northern Australia.

Their aim is to offer "well-described animals with information that can offer productivity gains".

"We try to identify as early as we can, something that's not going to be useful in the genetics game and then we'll try and carve that out and either fatten it somewhere, sell it to a feedlot or move it on."

That allows the family to run more cows to breed more bulls - their "profitable animals".

"Going forward, we are starting to put a bit more emphasis on animals that can marble a bit more because we think that will help with the grading.

"They need to re-breed quickly, get adequate cover in both the rump and the rib, and then if we can get some marbling without compromising anything."

Mr Maynard said carcase competition feedback was a reminder "to try and keep that rib and rump fat not too far apart".

"The competition points schedule is geared towards animals that on the domestic [market] would be 10 or 11mm on the rump and 8 or 9mm on the rib," he said.

"When we do a bit of scanning here for genetics, or even purchasing bulls, we don't want to see 12mm and 6mm for instance.

"We like to see those fat depths a bit closer together and being mindful we don't want anything too lean in our environment."

But most of all, the carcase competition is an important family tradition.

"We had a few years we missed in the middle, but when the competition started in 1988, my father was very keen and he got us into putting cattle in.

"He passed away about five years later, so the most successful exhibitor is kindly named after him - the Pat Maynard Memorial.

"So Dad got us into it, and hopefully we're doing the same with our kids and they're taking an interest."