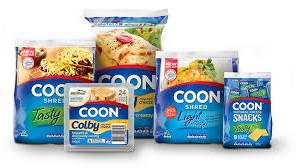 UPDATE, 2.15pm: The multinational owners of an Allansford milk factory have bowed to public pressure and will rename the Coon cheese brand.

Saputo Dairy Australia have responded to calls for the name to be dumped, saying after careful consideration, they'll be renaming the popular Aussie cheese.

In a letter sent to Aboriginal activist Stephen Hagan, the company said it wanted to honour the memory of the brand while encapsulating new values, according to The Australian newspaper.

The name change comes after Mr Hagan, and others including actor Josh Thomas, called out the brand name earlier this year, saying it was "racist".

Saputo responded to the calls, with the company's CEO Lino Saputo Jr saying in a statement the brand is developing a new name "aligning with current attitudes and perspectives".

"We performed a careful and diligent review of this sensitive situation," Mr Saputo Jr said.

"We wanted to ensure we listened to all the concerns surrounding the Coon brand name, while also considering comments from consumers who cherish the brand and recognise the origin of its founder Edward William Coon, which they feel connected to.

"After thorough consideration, Saputo has decided to retire the Coon brand name. As part of this process of transformation, we commit to keep our stakeholders informed as we move forward.

"At this time, we are working to develop a new brand name that will honour the brand affinity felt by our valued consumers while aligning with current attitudes and perspectives," he said.

Aboriginal activists have long claimed the name Coon is racist, but cheese brand is named after American Edward William Coon, who in 1926 patented the "ripening process" for the original product.

A growing list of products and even sporting teams are rethink and renaming in line with Black Lives Matter activism.

According to The Australian newspaper multinational Saputo has revealed it is re-examining the naming of Coon cheese as part of its corporate stance against racism.

A decision is expected within weeks.

Saputo in 2015 bought out Lion Dairy and Drinks, taking over the Warrnambool Cheese and Butter factory.

In an email to Dr Hagan this week, and echoed in a statement on Thursday from Saputo Dairy Australia, a company spokesman thanked Dr Hagan for raising his concerns on "such an important topic".

"One of our basic principles as an organisation is to respect individuals and groups of all backgrounds and to not condone discrimination in any shape or form,'' the email said.

"This guiding belief applies to our brand names as well. We would never tolerate any behaviour, activity or branding that goes against these values.

"As such, we are currently examining this situation very thoroughly and commit to getting back to you with a response in the coming weeks.''

Dr Hagan unsuccessfully tried to force the dumping of the Coon brand in 1999 with a complaint to the Human Rights and Equal Opportunity Commission.

In his email to Mr Saputo, Dr Hagan said Coon cheese should be "consigned to the past of outdated racist brands''.

"People of colour, especially First Nations people in Australia, are offended by that brand name in use in this country since November 1935, as it is a celebrated term used by our oppressors - many of which are found in government, corporate and civic leader ranks - to demean and subjugating us as a race,'' he wrote.

Saputo replied that it was proud to be a recent signatory to the "Business Council of Canada's statement denouncing racism", which followed worldwide "Black Lives Matter protests sparked by the police death in custody of African-American George Floyd in the US in May.

The protests have led to global calls for the dumping of product brand names with racial overtones and removal of statues and monuments celebrating historical figures linked to slavery and colonialism.

In Australia confectionery deemed racist and recently removed from shelves include Chicos and Red Skins.

The word "coon" was an offensive slur against African-Americans that emerged in the US during the 1800s and is believed to have derived from racist comparisons to raccoons.

The story Saputo to change the name of Coon cheese first appeared on The Standard.