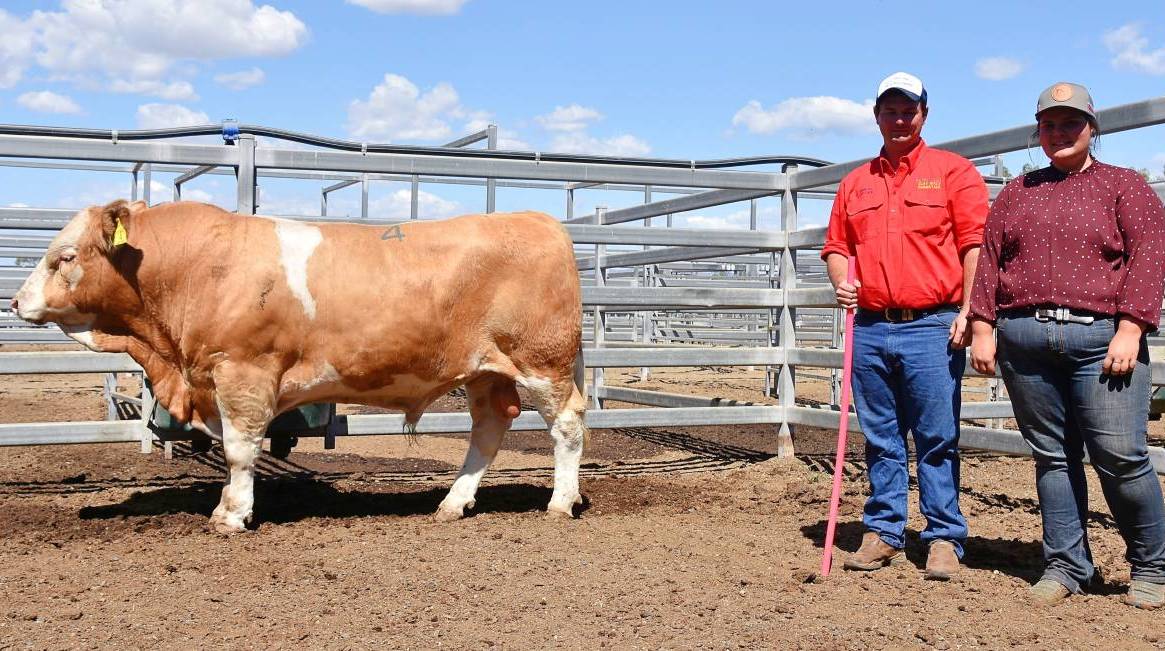 If you would like to see what one of Australia's top sires looks like then the next annual bull sale from Queensland's Clay Gully Simmentals is your chance.

If you would like to see what one of Australia's top sires looks like then the next annual bull sale from Queensland's Clay Gully Simmentals is your chance.

Heading the draft at the 40-year-old stud operation's upcoming sale is the very impressive Clay Gully Pentagon who was this month named one of the six most outstanding sires in the country in the online beef cattle showcase, Sire Shootout.

The 24-month-old bull sired by Lavarta Last Man Standing, was selected as one of the best of the best from a field of 83 beef bulls across Australia that are for sale this year.

"We were really proud to be named amongst that elite group of sires," said Clay Gully Simmental principal, Gareth Laycock, the third generation in his family to be involved in the operation.

"Clay Gully Pentagon is a polled bull that represents what we strive to breed at Clay Gully Simmentals - well-muscled, heavy boned, structurally correct, with an excellent temperament and a sleek Queensland coat type with plenty of loose skin."

At this year's sale on August 31, Clay Gully Simmentals will have more than 60 Simmental and nine Simbrah bulls on offer. The entire draft are 100 per cent Queensland born and bred in the tough coastal ticky lantana country that makes up the Laycock family's properties in South East Queensland.

It's this harsh environment that is one of the keys to the quality and versatility of Clay Gully's bulls that sets them apart in the industry and is much sought after by their loyal buyers.

"The fact that our cattle are bred on this ticky lantana country means that they can really handle the toughest of conditions," said Gareth. "Our aim has always been to produce functional bulls that can go out and do a job and not look back once people get them home. They just handle the conditions so well, and that gives us a bit of an edge.

"Our cattle have performed extremely well in a variety of environments from the Victorian High Country through to Far North Queensland." 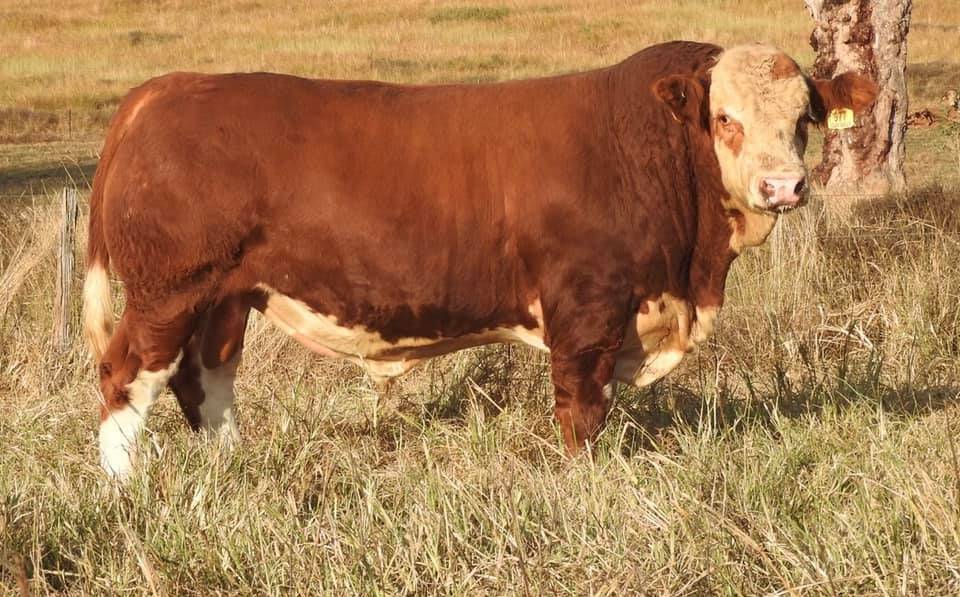 Top sire: The impressive Clay Gully Pentagon who was this month named one of the six most outstanding sires in the country in the online beef cattle showcase, Sire Shootout.

Gareth works closely with his grandparents, Rob and Viv Laycock, who founded Clay Gully Simmental Stud back in 1981 using Dunmore bloodlines and imported purebred females from New Zealand. In 1989 they purchased "Kipper" a 900 acre property 20 kilometres west of the Esk township that comprises a mixture of ticky spear grass and vine scrub country.

After growing up learning the ropes from them, Gareth headed to university and completed his studies in agriculture majoring in animal production before taking on the role with the family operation in 2013. Gareth and his fiancée Emily Brassington also run Biarra Valley Simmentals were they breed traditional as well as f Black Simmentals.

His uncle Darren Laycock is part of the family operation as well as running his own stud Brisbane Valley Simmentals and Simbrahs, while Gareth's sister Sophie Laycock has recently moved to Clermont to run a Brahman Stud but also runs her own stud Kipper Springs Simmentals.

Gareth is most proud of the reputation his grandparents have established with their Simmental stud breeding program.

"They sold their first bulls about 40 years ago and the people they sold them to are still buying bulls from them today, they have always been that happy with them," he said. "It's incredible the reputation they have been able to build up. It's a testament to the quality and exceptional results they've achieved."

Those results have been highlighted in the recognition Clay Gully has garnered in the show ring and in many competitions over the years including seven Grand Champion titles at the Queensland Royal Show.

Gareth said the popularity of Simmentals has continued to grow because of the valuable traits they deliver to a herd.

"Especially throughout Central Queensland, they are the dominant bulls that people are using over their Brahman and Droughtmaster cows," he said. "There is the increased growth for calves that you get using the Simmental bulls and the ability to fatten quicker than some of the other breeds, as well as the milking ability of the cross bred females."

Like many livestock producers, Clay Gully Simmentals has welcomed the good season that has followed drought conditions. Gareth said it's reflected in the excellent condition of the bulls in the sale line up.

"They did it pretty tough being so dry at end of last year and the start of this year until it rained in February and since then its been good conditions," Gareth said. "We are really pleased with the way they've come up. They are probably even a better line than last year.

Take a look at the full offering in the sale catalogue here.

The Clay Gully Simmental sale will be held on August 31 at CQLX Gracemere Rockhampton and will be streamed online with StockLive allowing online bidding for those who can't make the sale. Bulls will be available for inspection the day before the sale or at anytime at "Kipper" Esk. The entire draft of bulls are soft, smooth coated, soft easy doing bulls that will be semen tested and muscle scanned before the sale. All bulls will be vaccinated with 3 germ blood, 7in1, botulism, 3day and PestiGuard. The stud will once again be offering free delivery to major saleyards across QLD.