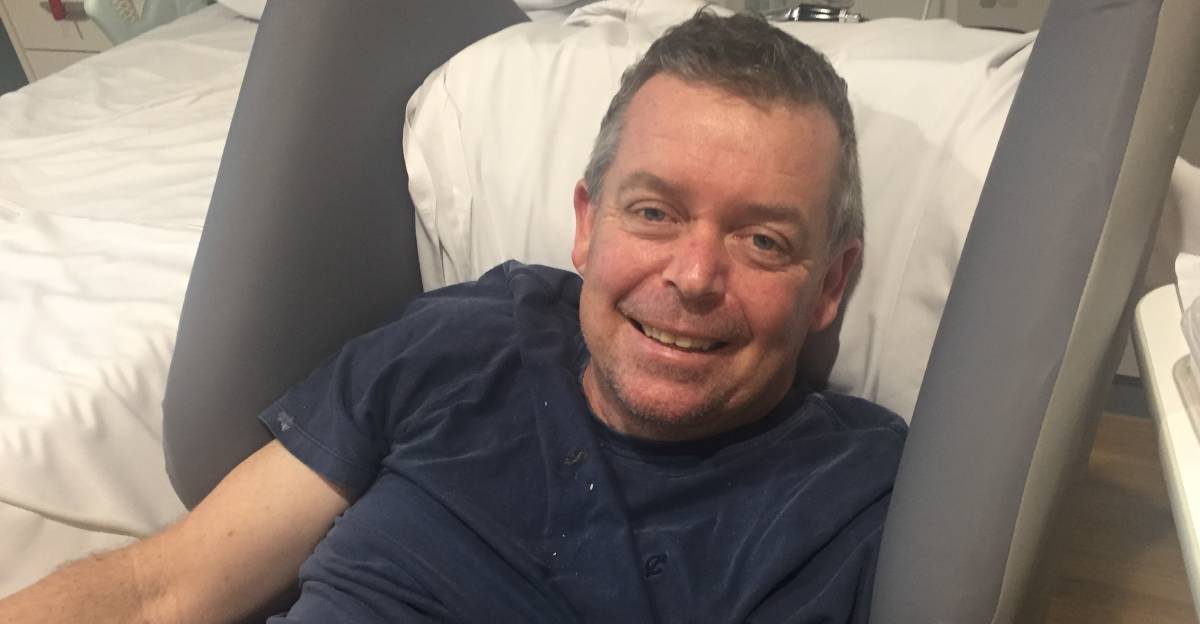 Toobeah farmer Chris Lamey recovering in St Vincents Private Hospital in Brisbane after a seed silo collapsed on him.

Toobeah farmer Chris Lamey is on the long road to recovery after he was badly injured when a seed silo collapsed on him.

CHRIS Lamey says he had just pulled the slide door on the discharge chute underneath his seed silo, when - in the corner of his eye - he saw the metal legs of the structure he had crawled under starting to buckle.

The next thing the 45-year-old Toobeah farmer remembers is being in a world of hurt, trapped under the framework of the 25 tonne grain silo and covered in seed barley.

That was on May 26. Seven weeks and four major operations later, Chris remains in St Vincent's Private Hospital in Brisbane slowly recovering from a horrific farm accident, which left him with smashed legs, a shattered pelvis, a broken arm and countless bruises, cuts and scrapes on his body.

"We hadn't even properly positioned the auger so we could start filling the planter," Chris said. 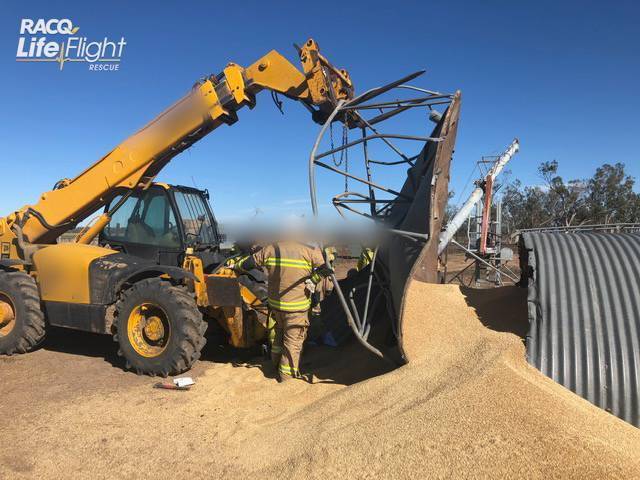 Chris Lamey was trapped under a collapsed silo on his Toobeah property, Coomongo.

"I usually let a few kilos go, just in case there was any seed left over from a previous crop or there are rat or bird nests that have accumulated in the silo.

"I crawled under there without thinking. I would never have even imagined a silo could collapse."

Farm worker Barry Patterson had the skills and the competence to rescue him from the situation, the farm's telehandler was parked near the silo, paramedics from Goondiwindi were able to begin stabilising his condition, and the RACQ LifeFlight helicopter had him in Brisbane within hours of the accident.

"Without any of those four things, I was gone," Chris said.

"At first, all l could hear was Barry calling out 'I can't see you, where are you'.

"I don't know how I sounded and I couldn't see anything, but I know I kept yelling: I'm under here. I'm okay. Get the telehandler to move the silo off me."

"I think my survival instinct had kicked in.

"I know I wanted to pass out - the pain was incredible. But I also knew that if I did, I was gone."

All this equipment that's on every farm, we take it for granted that it is safe. - Chris Lamey, Coomongo, Toobeah

After several attempts at positioning the 2.5 tonne telehandler, it proved strong enough to lift most of the base of the silo off Chris.

However, a wallaby jack was needed to free Chris's severely damaged foot.

By then a team of paramedics and the ambulance had arrived from Goondiwindi.

What else proved crucial in saving Chris's life was that the RACQ LifeFlight helicopter was able to land on Coomongo about 90 minutes after the accident occurred.

Chris has had plenty of time to think about the accident and the future of his farming business.

"All this equipment that's on every farm, we take it for granted that it is safe," Chris said.

"Particularly during the drought, we were all rushing around trying to get everything done and never give a thought to what sort of condition this equipment is really in.

"Obviously, we all get away with it most of the time. But when it goes wrong, it can go incredibly wrong.

"Who would ever think a silo could wear out.

"I just can't help but think it really is the sting in the tail of the drought."