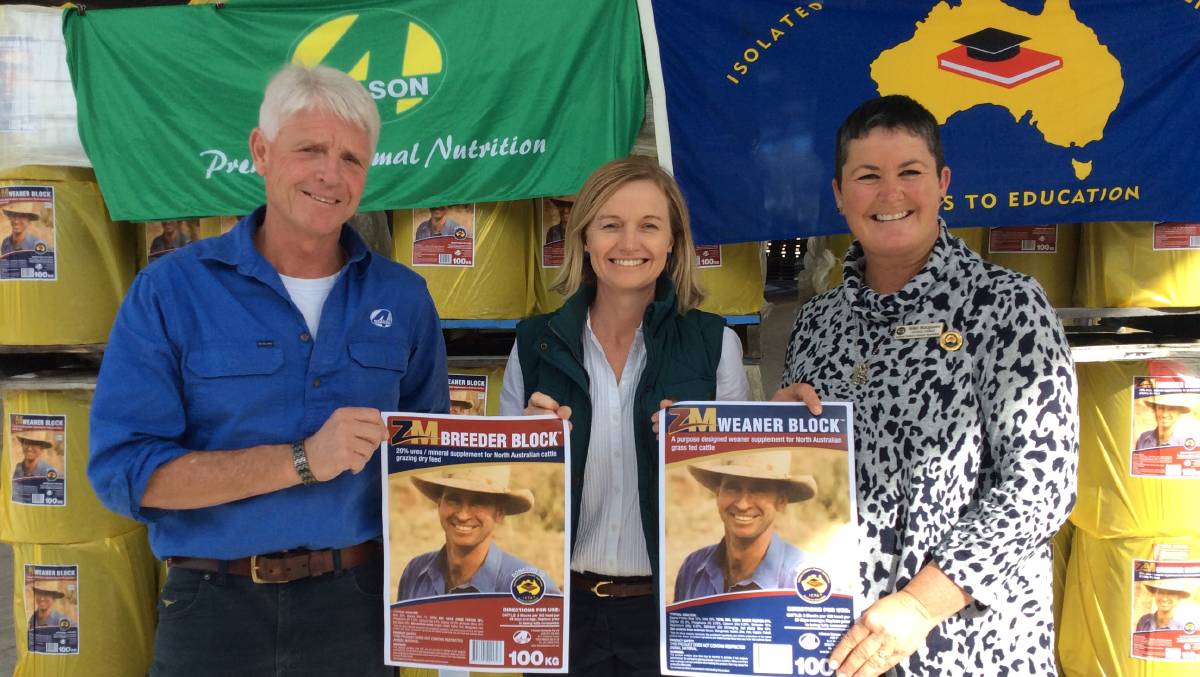 Five per cent of the sales of Four Season's new ZM nutrition block will go to the Isolated Children's Parent's Association.

A NEW range of nutrition blocks specifically designed for northern Australia's cattle industry have been launched, with 5 per cent of sales going to the Isolated Children's Parent's Association.

Released by the Four Season Company, the ZM nutrition blocks have been named in honour of beef industry leader the late Zanda McDonald, who developed nutrition supplement while on the family's peninsula property Rutland Plains.

- The ZM Weaner Block is a fomulated supplement with 10pc bypass protein meal and 10pc urea for grass fed cattle.

The wife of the late Zanda McDonald and MDH chief financial officer Julie McDonald said it was good to see Zanda's work continue.

"Zanda put a lot of effort into understanding the nutritional requirements of cattle in northern Australia, particularly the deficiencies they face," Mrs McDonald said.

"Working with Chick Olsson from Four Season, he tested the soil and grasses to develop an effective, cost efficient nutrition supplement.

"It's a formulation we've been using in MDH and it is very pleasing to see it now available for all producers across northern Australia."

Four Season Company manager Sam Stephens said the blocks were suitable for use across northern Australia.

"The ZM blocks have designed for northern Australia and proven to perform," Mr Stephens said.

"There has already been strong demand for the blocks heading into the peak demand time for supplementation."

ICPA federal councillor Nikki Macqueen said the funding resulting from the sale of the blocks would help ensure the ICPA was able lobby for educational access for students regardless of where they live in Australia.

"It is fantastic to see the McDonald family and Four Season getting behind the ICPA with this incredibly generous gesture," Mrs Macqueen said.

"We want to make sure even the most isolated students to have access to the same educational opportunities as every other student."

The McDonald family has had a long association with the ICPA. Zanda's mother Chris was a founder of the Cloncurry branch and his aunty, Trish Mitchell, is the Queensland patron.