A MAN who was busted speeding along a central Queensland highway was in a battle to the death with a brown snake. 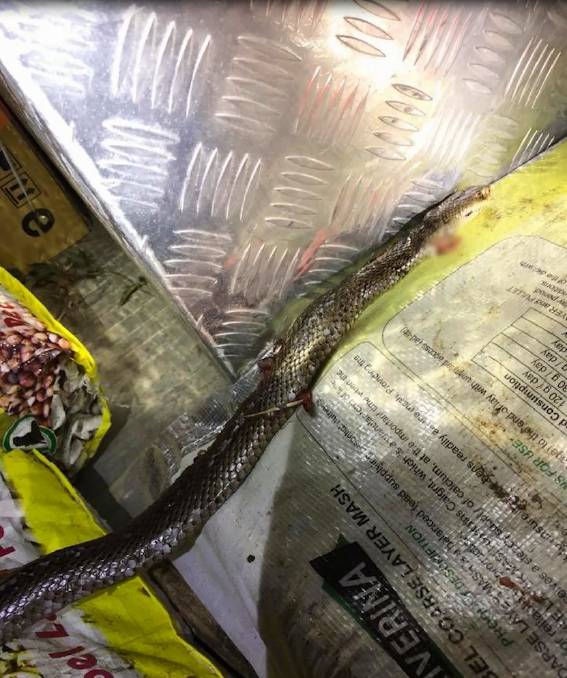 The brown snake came off worse for wear after a battle with 'Jimmy.'

A MAN who was busted speeding along a regional Queensland highway managed to talk his way out of the ticket after he revealed he was in a battle to the death with a brown snake at the time.

Jimmy, a 27-year-old Gladstone man, was driving his ute along the Dawson Highway west of Calliope on June 15 when he passed a cop while clocking 123km/h in a 100km/h zone.

Jimmy said he was driving along when he noticed an angry brown snake come up from the gear stick and begin slithering toward his leg.

Barreling along the remote highway alone, Jimmy said he had to fight off the snake using a seat belt and work knife after it started to wrap around him and strike at his driver's seat.

"And the more I moved my legs... it just started to wrap around me. It's head just started striking at the (driver's seat) chair, between my legs."

Jimmy fought off the snake while trying to stop the car.

But fearing he had already been bitten and his life was in danger, Jimmy killed the snake and chucked it in the back of the ute, planning to take it with him to hospital.

A local road patrol officer noticed the speeding car and pulled it over, where Jimmy's unique excuse came to light.

Realising it was not just a colourful story, the officer sought medical assistance.

Paramedics attended the scene and it was determined that Jimmy had not actually been bitten by the snake but was certainly suffering shock from the ordeal.

"It was pretty terrifying, I've never been so happy to see red and blue lights," Jimmy said.

The eastern brown snake is highly venomous and one of the most deadliest snakes in the world.

A police spokeswoman said Jimmy had not been fined for speeding given the unique circumstances, but reminded Queenslanders that snakes are a protected species.

"While this was a particularly unique situation, snakes are protected under the Nature Conservation Act 1992 and people should not attempt to capture or injure wildlife in Queensland," the spokeswoman said.