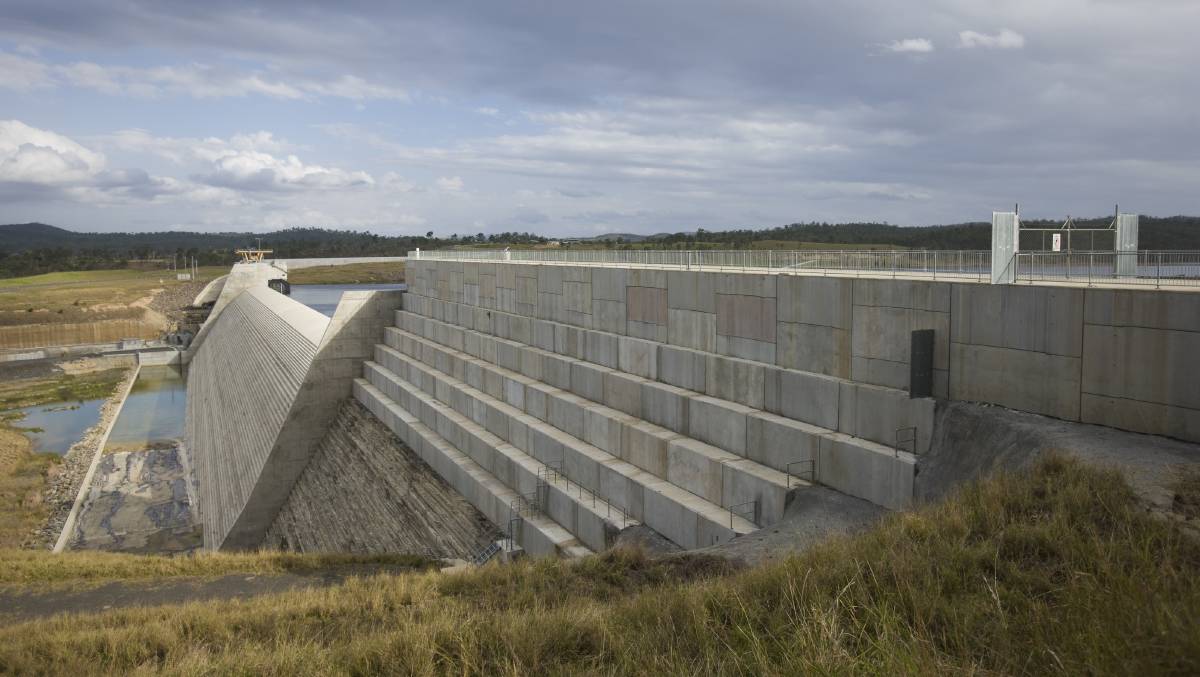 The Commission of Inquiry's 563-page report was tabled in Queensland Parliament on Thursday.

An independent review into the root cause of Paradise Dam's structural and stability issues has found the dam's primary spillway apron width to be 'completely inadequate'.

The Commission of Inquiry's 563-page report was tabled in Queensland Parliament on Thursday, with the state government accepting all eight of the report's recommendations.

The primary spillway apron's width of 20 metres was found to be inadequate and a root cause of the scour and erosion immediately downstream.

"Advice from geotechnical engineers did not provide detail on the erodibility of the rock immediately downstream of the apron," the report reads.

"Hydraulic studies gave the design team undue confidence that the erosive forces of the water would be largely contained within a 20m apron.

"It cannot be known with certainty what the result of comprehensive peer review would have been. But this accepted means to discover and correct problems was absent for the apron."

"The commission heard evidence about a litany of issues with the design and construction, some of which were ultimately found to be root causes of the present-day structural and stability concerns," he said.

"The commission found that the design of the primary spillway apron is completely inadequate. It's simply not wide enough.

"Evidence before the commission, suggested that if the 2013 floods had lasted longer, the erosion due to the insufficient downstream protection may have undermined the dam giving rise to a risk of a dam failure.

"Importantly, the commission considers that Sunwater's position in responding to the risks associated with the dam is reasonable."

The commission heard evidence about a litany of issues with the design and construction... - Dr Anthony Lynham

Other issues raised in the report included the segregation, density, compaction and the cleaning and curing of the surface of roller-compacted concrete layers during construction, also known as 'lift' joints.

The treatment of, and high number of, cold lift joints was also flagged as lift joint strength is important to the overall stability of the dam.

The concrete mix and its peak placement during summer weather, which exacerbated constructability issues, was also highlighted.

Queensland Farmers' Federation CEO Dr Georgina Davis said farmers placed the highest possible value on the safety and wellbeing of the community in which they operated, lived and raised their families.

Dr Davis said further planning was needed to account for changes in land use and current market trends, which were seeing demand for water outstripping supply.

"We expect the state government to continue to safeguard existing water entitlements, and the reliability of those entitlements, while investigating and remedying water supply constraints more broadly across the region to ensure the most viable outcome for farmers in the Bundaberg community," she said.

"We appreciate the Queensland government's transparency in this situation given the option to leave the dam as is may not only have contributed to the loss of lives and substantial infrastructure damage, but would have a devastating effect on the future water security of the local farming community."

The construction project was flawed from the top down. - Deb Frecklington

Following the release of the report, LNP opposition leader Deb Frecklington called for the state government to immediately abandon its $100 million plan to tear down the Paradise Dam wall.

"The report states that the former Labor government charged with constructing the dam failed in its basic responsibility to ensure a proper and adequate build," Ms Frecklington said.

"The report highlights issues around the project's management, materials and methods which make for a sobering reading.

LNP Member for Burnett Stephen Bennett said the report provided the region's residents with more evidence that Labor's imminent demolition of the dam wall is unnecessary.

"The Bundaberg Regional Council and Bundaberg Fruit and Vegetable Growers commissioned a study which found $2.4 billion would be wiped from the Queensland economy over the next 30 years if Paradise Dam was lowered," Mr Bennett said.

"Labor is treating the people of Wide Bay with complete contempt, as they have done throughout the whole Paradise Dam saga.

"The decision to pull down the dam will have huge repercussions for jobs and locals deserve the truth."