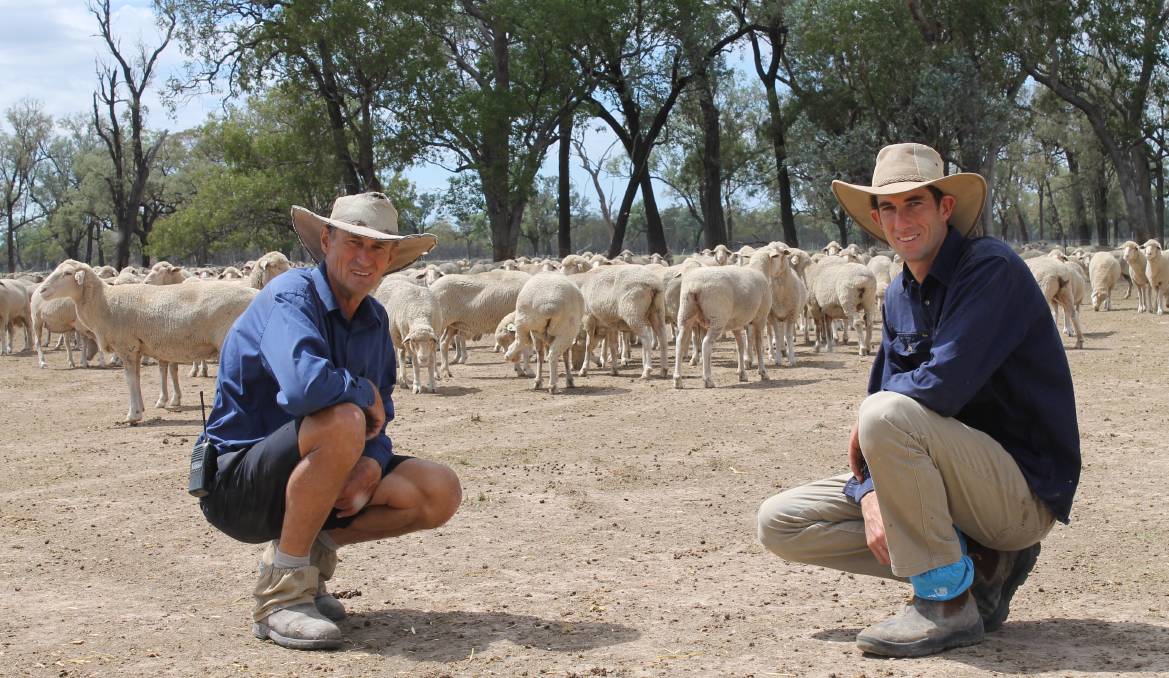 SUCCESSION PLANNING: Trevor and Alan Rissmann, Rosedale, Yelarbon, represent third and fourth generation sheep producers and soon the latter will be joined by siblings Geoff and Brett to run the Riss Merinos wool and meat business.

The next generation of Rissmanns are poised to continue a family run operation that started 100 years ago.

OUT at Yelarbon, about 45 kilometres to the east of Goondiwindi, there's a changing of the guard under way.

But the incumbent proprietors are even happier to be preparing a handover as three of their sons exhibit an ever-deepening interest in extending the family run to a fourth generation.

"To say me and Linda are happy the boys have made their intentions known is a bit of an understatement," Mr Rissmann said.

"We're proud and we have worked hard to get to this stage. What becomes of it in the future is impossible to tell but the signs are very good that it will all work out as we hope.

"This has always been a family operation and one of the main reasons behind our decision to buy stud sheep is that we see it as a bit of succession planning."

Mr Rissmann is uncertain when sons Alan, Geoff and Brett will take the reins but he and his wife are steadily laying foundations.

Two years ago they went on a buying spree of sorts, buying 1500 quality ewes from Errol and Candy Brumpton, Well Gully Merinos, Mitchell, both doyens of the industry.

Each of the ewes were in lamb, meaning only a few months after acquisition, the Rissmanns had 3000 head of poll Merinos.

"We knew what we were getting," he said.

"Errol is the epitome of a great breeder but we heard he was starting to disperse some of the stock and we took the opportunity.

"It's been so dry out here. We've just come through the worst drought that anyone's ever seen and in January we didn't even get 20mm of rain.

"Still and all, the sheep have been doing exceedingly well. They have a good constitution and they have been handling the dry conditions. Mind you, we do have them locked up in a drought block situation at the moment because the paddocks are just so bare.

"If they were roaming we would be going everywhere to feed them but having them locked up means there is just one place to go for feeding."

The Rissmanns are splitting their interests between prime lamb and wool as they service domestic markets.

The Riss Merino operation is spread across two blocks, one covering about 2800 hectares and the other 1200 hectares.