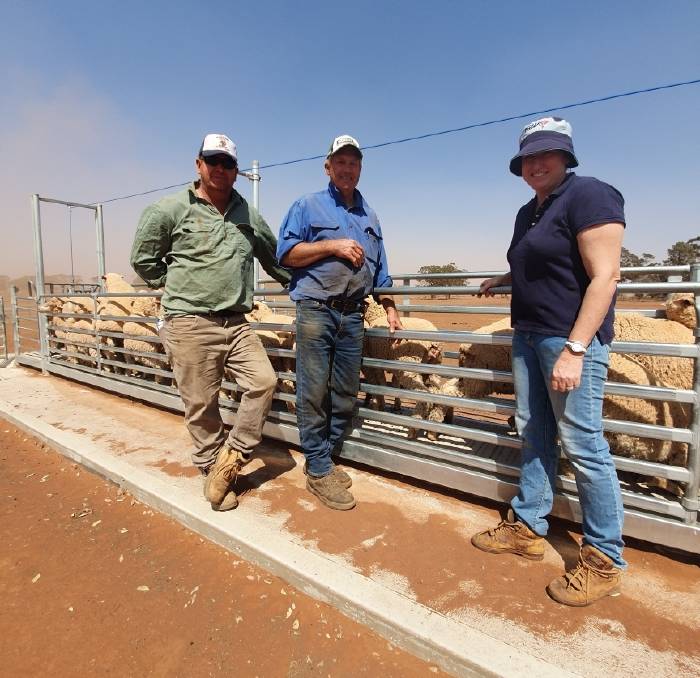 SOMETIMES you can never get enough of a good thing.

Take, if you will, the 8000 hectare Millridge, Tottenham, NSW, owned and operated by John and Kate Lees.

On this patch of ground out Dubbo way, they grow winter crops such as wheat, barley, canola and oats. It's also where they run a Merino flock of 6000 head, of which 3200 are ewes.

Mr Lees confesses their numbers are down by about 40 per cent, courtesy of the drought although they did receive 20mm of rain a few days ago.

The Lees operation owes its formation to the previous century and astute buying of Well Gully Merino genetics, run by breeding doyens Errol and Candy Brumpton.

"We have bought rams and ewes off Errol," Mr Lees said.

"Our mob is almost 100 percent Errol's genetics. There might be a handful of rams from when we started with but ever since '99 they've been Errol's."

Mr Lees said Millridge, which grows for wool and meat, had drawn a double benefit from the utilisation of Well Gully genetics.

"We have gone for a bit of a fatty Merino with Errol's help," Mr Lees said.

"Going for a fattier style Merino has given us good meat and good wool. We sell through the saleyards at Forbes and been getting terrific results."

Millridge joins its ewes for six weeks from December 1 with a view to lambing by Anzac Day. Some are retained as replacement breeders and but others are readied for market and fattened in time for sale before Christmas.

"By then the best of them could be around the 50kg mark and the price being paid varies but we find it works well for us," Mr Lees said.

"They have good early growth rates and that's what we really like about these genetics.

"On the wool side we are shearing every six months and we have been doing between three and a half to four kilos each cut every six months. Mind you those figures were probably before the drought came along.

"Now with the drought the figures are probably back to 2.8kg every six months and we're averaging 18 micron wool.

"We went for the SRS. We just like a lot of their attributes. Tottenham is the geographical centre of NSW but where we're located we consider ourselves to be in the western area.

"We're in a 400mm rain environment and some of the traits that Errol was working with in the early days along with Jim Watts, was about skin and that's proving very beneficial.

"The way the sheep heat and cool themselves so efficiently without sing a lot of energy has been a real bonus."

Millridge usually splits its mobs for lambing but keeps the mob size to about 700 head and lambing percentages are up by at least five percent and ewes were in better condition because they did not carry the fleece for as long.

And that, he said, was another good thing.