Significant errors have been detected on maps designed to protect koalas throughout South East Queensland.

Significant errors have been detected on maps designed to protect koalas throughout South East Queensland.

THE Queensland Government's mapping systems have again been called into question after it was revealed there are significant errors on maps designed to protect koalas throughout South East Queensland.

"Why haven't they learnt the lesson. Where is the credibility in Queensland's mapping systems," Mr Wager said.

"These koala maps are just computer models that paint pretty colours while ignoring what is really on the ground. 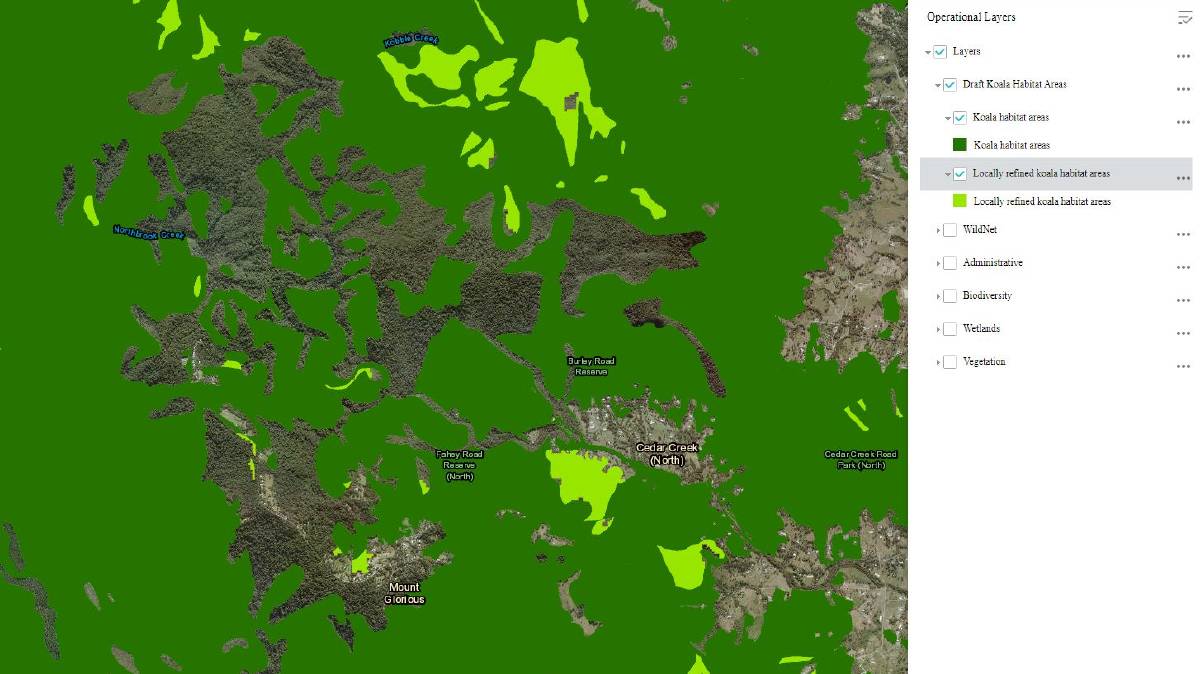 "Someone needs to get their backside out from behind the computer and actually check what they are mapping."

Premier Annastacia Palaszczuk announced plans on December 8 to declare more than 570,000ha of land as koala priority areas, including 300,000 hectares of habitat where clearing will be banned.

"New mapping identifies more than 570,000 hectares of land to be declared koala priority areas - an area that is twice the size of the ACT - of which more than 300,000 hectares is core habitat," Ms Palaszczuk said. "We are proposing to implement stronger regulations to limit clearing in these large interconnected areas of high quality habitat."

Errors in the mapping identified by Mr Wagner included open grass paddocks west of Peak Crossing and water in the Brisbane River from Wivenhoe to Lake Manchester.

Ms Palaszczuk said ensuring the protection of large corridors of land will address one of the main causes of a declining koala population, which is the destruction of habitat. 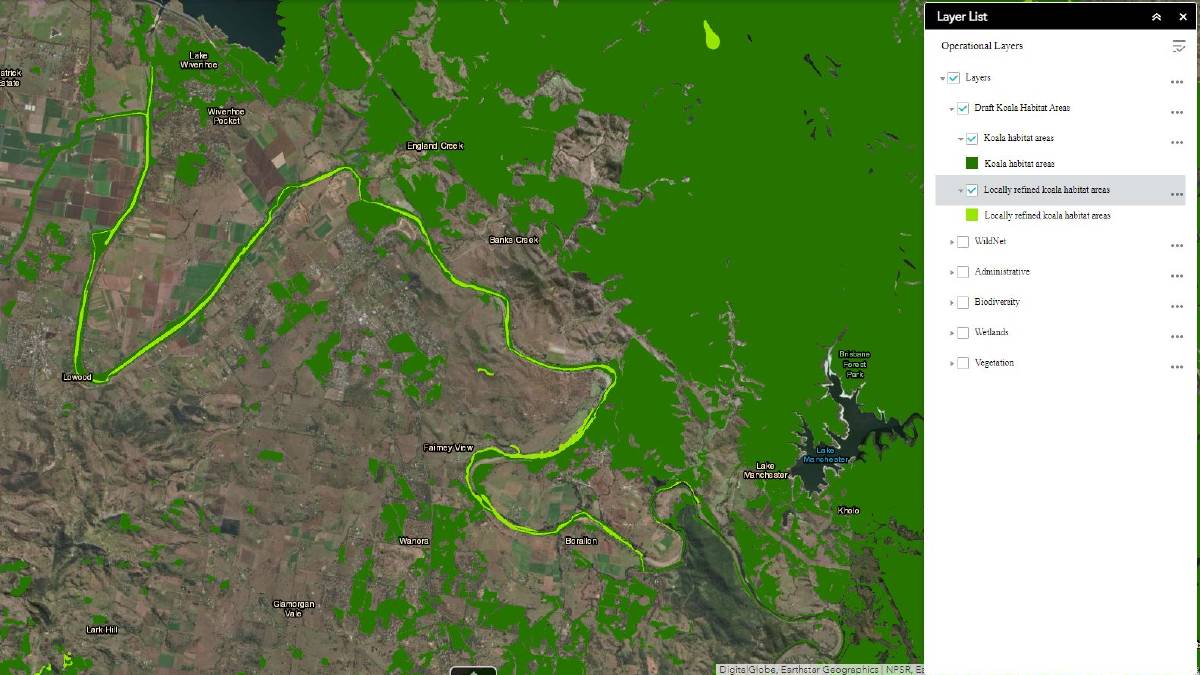 The water is the Brisbane River is mapped as koala habitat.

"The proper protection of koalas is too important to mess up though Labor's inability to deliver even basic administrative governance.

"We need proper koala mapping that gets the balance right between the environment and landholders, so the community can have confidence in the system." 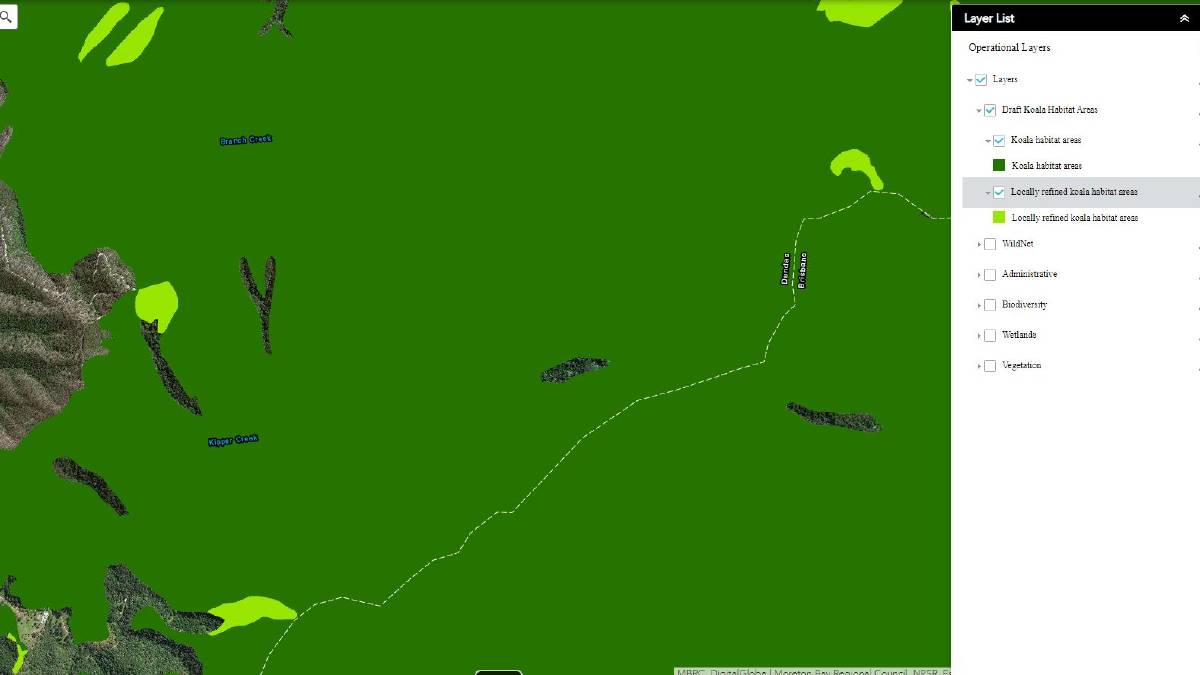 "During this process, there were some inaccuracies that were found - such as areas that had been mapped as koala habitat but had, in fact, been developed," Ms Enoch said.

"These were rectified during our processes, and the mapping that is now proposed contains remnant and high value regrowth, which is more likely to be koala habitat.

"We want to make sure we get this right, and that is why we opened up the draft maps for public consultation so landholders and stakeholders have a chance to review the koala habitat mapping and provide feedback."

It is estimated koala populations have decreased by 50-80 per cent in South East Queensland habitat areas during the past 20 years and nearly three quarters of essential koala habitat has already been destroyed.

The Palaszczuk Government is also investing $2 million to establish a five-year partnership with the Queensland Trust for Nature to deliver on-ground koala habitat restoration in priority areas through partnerships with landholders and local governments.

The flaws in koala mapping follow the debacle over trigger mapping in June when the Palaszczuk government was forced to drop more than a third of areas identified as being 'high-risk areas' where endangered, vulnerable or near threatened plants are present or are likely to be present.

Mapping errors included Queensland icons such as Suncorp Stadium and the Gabba were caught up in the debacle as well canals on the Sunshine Coast, the Dalby, Charleville and Blackwater airports as well as mines and coal stockpiles in Central Queensland.

Landholders have until December 22 to review this mapping and provide feedback.