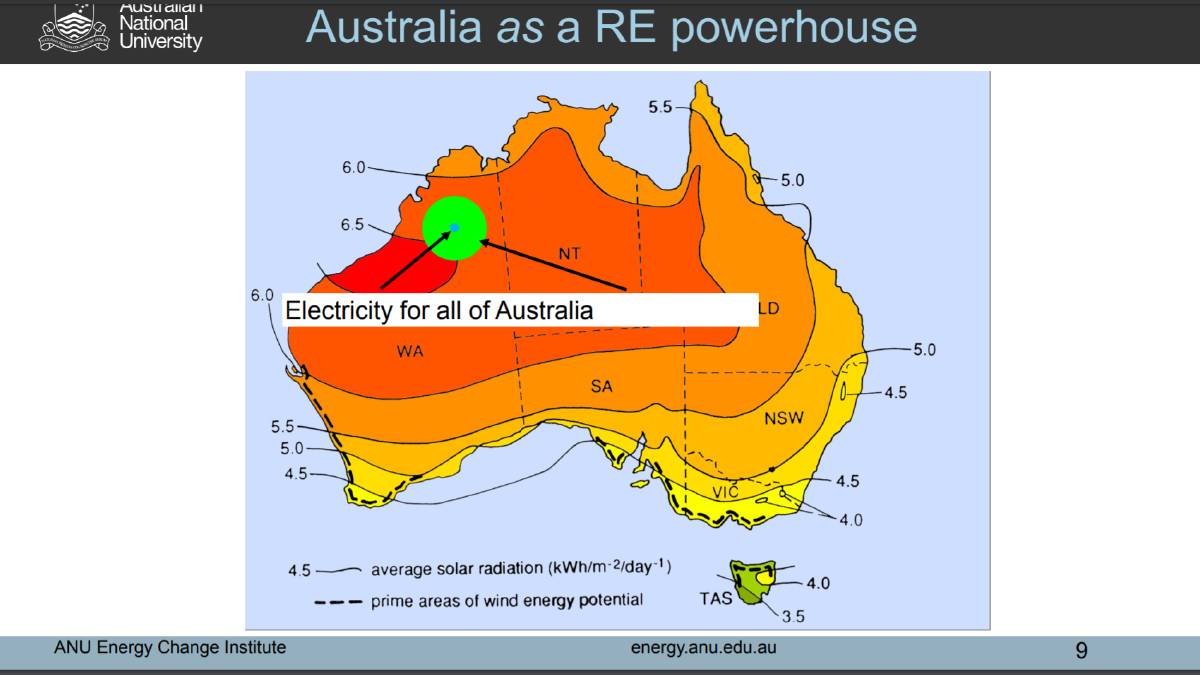 In coming decades as we transition to renewable energy in response to a climate change, Australia's excellent wind and solar resources will increasingly provide landowners with a bonanza of renewable energy opportunities, according to Professor Ken Baldwin when he was addressing the National Renewables in Agriculture conference and expo in Wagga Wagga. 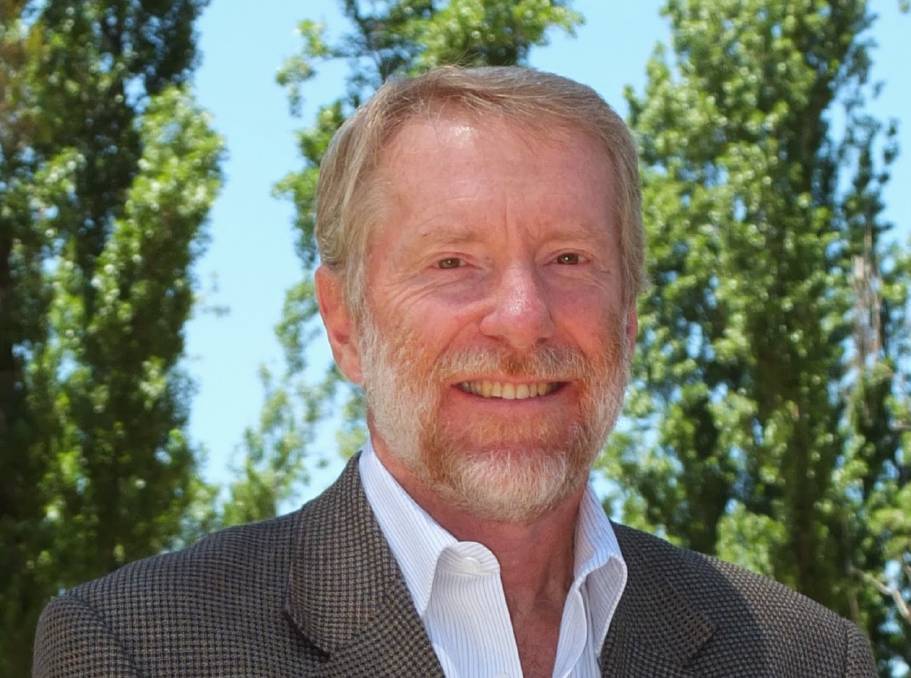 Professor Ken Baldwin. "Even more exciting is the prospect for Australia to export its world-class renewable energy." Photo: supplied

Professor Baldwin is the Director of the ANU Energy Change Institute, Canberra.

He told the audience the electricity sector is the low hanging fruit for reducing emissions, and will require an expansion of solar and wind farms into regional areas to gradually replace centralised fossil-fuel generators on the coast. 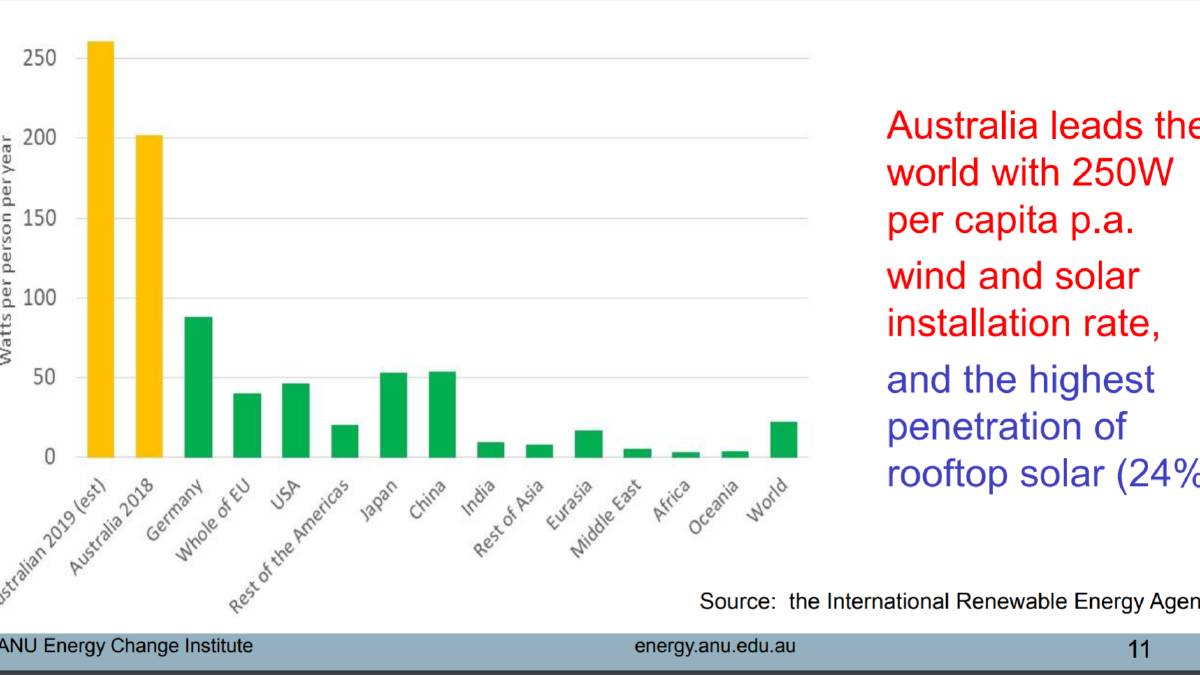 "Once electricity is largely renewable, attention will turn to removing fossil fuel use in the rest of the economy by electrifying transport, industrial processes, space heating and agriculture - potentially doubling or even tripling the size of our existing electricity network," he said.

"And to balance the intermittent nature of renewable generation, we will need more electricity storage such as batteries and pumped hydro.

"In particular, off-river pumped hydro (as opposed to on-river conventional hydroelectricity) provides energy storage by cycling water between two reservoirs several hectares in size, separated by several hundred metres in height and connected by a pipe with a generator at the bottom. Once-off filling of the dams will require only small top-up rainfall, and dams can be covered to reduce evaporation - potentially with floating solar panels."

Professor Baldwin said pumped hydro will likely be located near the best solar and wind resources in rural areas where land is more readily available.

"At the Australian National University we have mapped 22,000 off-river pumped hydro sites around the country - less than one percent of which will be needed for a 100 percent renewable grid," he said. 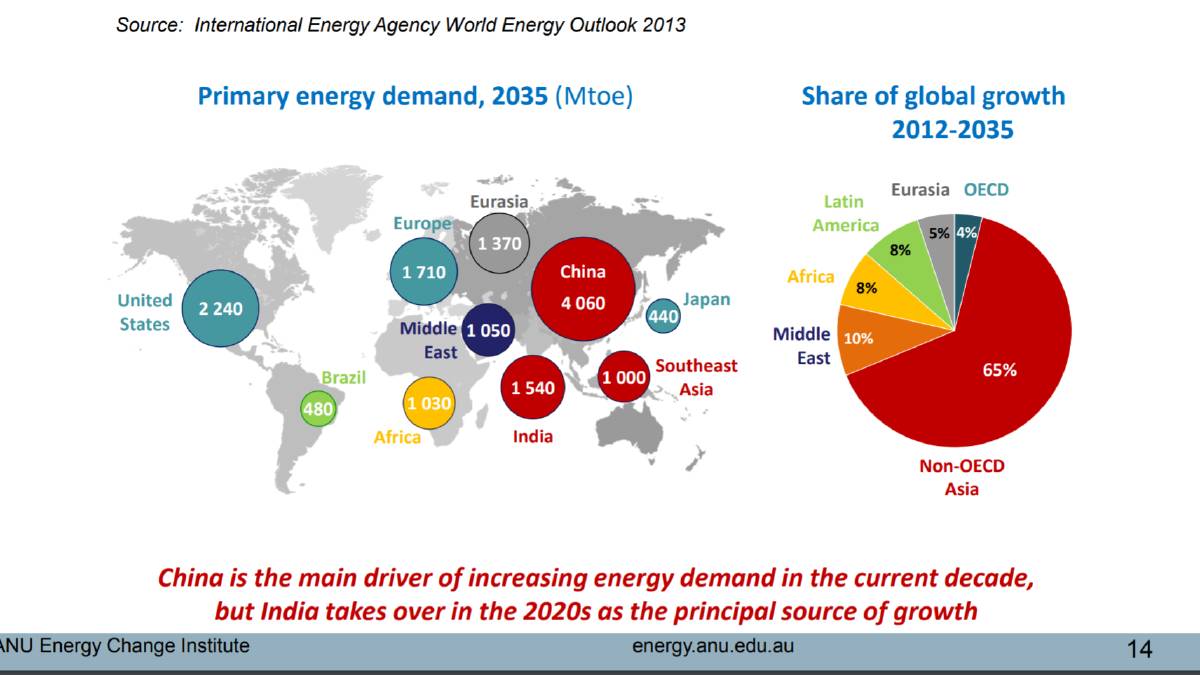 "The development of renewable energy zones proposed by the Australian Electricity Market Operator (the first recently announced by the NSW Government near Dubbo) will enable large-scale wind and solar farms (plus storage) to be hosted on rural properties."

Professor Baldwin pointed out landowners and local communities will benefit from the creation of new, constant streams of income that can help balance income variability in agriculture. This will become more important as the greater frequency of extreme weather events becomes a challenge for agri-businesses battling climate change.

"Even more exciting is the prospect for Australia to export its world-class renewable energy," he said.

"Although it might sound like science fiction, the excellent solar and wind resources in the north of the country could transmit electricity via undersea cable to Southeast Asia and beyond.

"This is now achieving serious consideration by companies such as Suncable who propose to build a massive solar farm augmented by battery storage in the Northern Territory for electricity export to Singapore."

A perhaps even greater opportunity might be to use renewable electricity to create hydrogen via electrolysis from water, then export the embodied energy as hydrogen fuel.

"Already Japan, Korea and Germany are lining up, and projects like the Asian Renewable Energy Hub proposed for the Pilbara aims to build a massive 15 gigawatt solar and wind farm to export green hydrogen," Professor Baldwin said.

Other opportunities exist to use renewable electricity and hydrogen to reduce iron ore into green iron and steel. Co-location of our best renewable energy with world-class mineral deposits in the north provides Australia with a significant opportunity to value-add through refined metal exports.

"At the ANU Energy Change Institute we calculate that if we value-add to our current iron ore production we could export 53 million tonnes of green steel each year. Further, if Australia were to export the equivalent amount of energy exported in coal and natural gas by making 20% renewable electricity and 80% green hydrogen, then together with green steel this would require renewable electricity generation 20 times the current national grid," he said.

"It will also require large areas of land in northern Australia - just under 100,000 km or around one percent of Australia's land area, some of which could be located on lower-quality pastoral land.

"The coming decades will see enormous opportunities for integrating renewable energy in the agriculture sector, creating new economic paradigms that will help future-proof Australia's energy exports, and maintain our role as an international energy powerhouse."

The story Australia as a renewable energy export powerhouse first appeared on The Land.