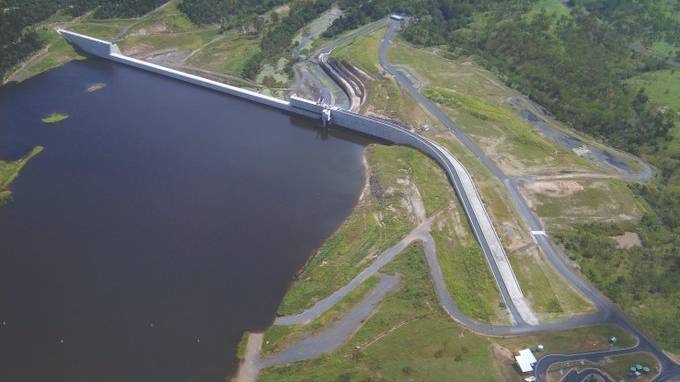 WASTED WATER: Technical reports providing the basis for Sunwater's decision to lower the Paradise Dam wall by 5m have finally been released.

TECHNICAL reports providing the basis for SunWater's decision to lower the wall of the compromised Paradise Dam by 5m have finally been released.

Dr Lynham had previously ruled out releasing the reports, saying they were "commercial in confidence".

However, the original construction methods used on the $240 million dam opened in 2006 has been brought into question. These include issues with the bonds between each layer of roller compacted concrete in the dam wall, the reports say.

Frighteningly, the reports say there is a risk the dam wall could break apart during an extreme weather event.

To the dismay of the region's agricultural producers, SunWater has been forced to release a staggering 105,000 megalitres of water, as part of its plan to reduce the dam's capacity to just 42 per cent of the current size.

While Dr Lynham was in Bundaberg announcing the release of the long-buried reports, the bigger pain for Labor was in Sydney where the Queensland government owned corporations Seqwater and SunWater were found to have failed spectacularly in their duty of care in the 2011 floods which inundated some 23,000 properties in Brisbane and Ipswich.

Dr Lynham said the technical reports on Paradise Dam confirmed potential stability issues with the dam if there was a repeat of an extreme weather event like the 2013 cyclone and flood.

"The reports confirm that the dam is safe now," he said.

"However, they do confirm potential risk of major flooding if there is another an extreme weather event like 2013 and this is why Sunwater made the decision to release water and lower Paradise Dam's spillway by 5m."

Growers want a signal from the Queensland Government that our industry is a priority as the engine of so much regional growth and prosperity. - Joe Moro, Queensland Horticulture Council

LNP Leader Deb Frecklington said the Palaszczuk government had been dragged kicking and screaming to hold an inquiry into Paradise Dam.

"The people of Wide Bay have been in the dark for months over the safety of the dam and why it had to be drained to a staggering 42pc in the middle of a drought.

"Labor's handling of this issue has been a debacle and it's destroyed all trust in the Palaszczuk government.

"Jobs are being destroyed in Wide Bay right now and the public deserves answers."

The LNP moved a motion to establish a Parliamentary Inquiry into the design and construction of the failed Paradise Dam in October, but was was voted down by Labor.

Ms Frecklington said the LNP was committed to building water infrastructure projects in regional Queensland - including the New Bradfield Scheme.

"This is a worrying precedent," Mr Moro said.

"It's not a huge leap for growers in other parts of the state to imagine with a sense of dread what would happen to their own businesses should something similar happen with their local water storage."

Of particular concern are the new and planned tree crop plantings in the Bundaberg region downstream from Paradise.

"We are extremely concerned that, assuming no significant inflows are received between now and July, the allocation for irrigators may be as low as 16 per cent, which is simply unsustainable for the vibrant progressive agriculture industry,"

"Tens of thousands of trees have been planted in the last five years with many more planned," Ms Grima said.

Producers are justifiably anxious about their crops and livelihood. - Bree Grima, Bundaberg Fruit and Vegetable Growers

"Producers had only purchased the water allocation they needed for young plants, knowing they could purchase more water as they matured.

"Now this reliability has been taken away it has jeopardised these plantings. Producers are justifiably anxious about their crops and livelihood."

"Growers want a signal from the Queensland Government that our industry is a priority as the engine of so much regional growth and prosperity," he said.

"A commitment to raising the Paradise Dam wall back up or ensuring no capacity is lost within the catchment is the vote of confidence from this Government that our industry needs right now."

Growcom chief executive officer David Thomson said the still to be announced terms of reference for the inquiry needed to include not just structural and stability issues, but also the failures to properly consult and communicate with the community.

"Overnight and without any prior warning irrigators received a text message that tens of thousands of gigalitres would be released from Paradise within the next day or so," Mr Thomson said.

"And since then many of the same questions remain.

"An inquiry is important, but it simply cannot in any way hold up work towards resolving structural issues and restoring certainty and confidence to the region."

Community information sessions on the Paradise Dam reports will be held at Stockland in Bundaberg today (Friday) from 2-5pm and at the CBD Pavilion from 8-10am on Saturday.