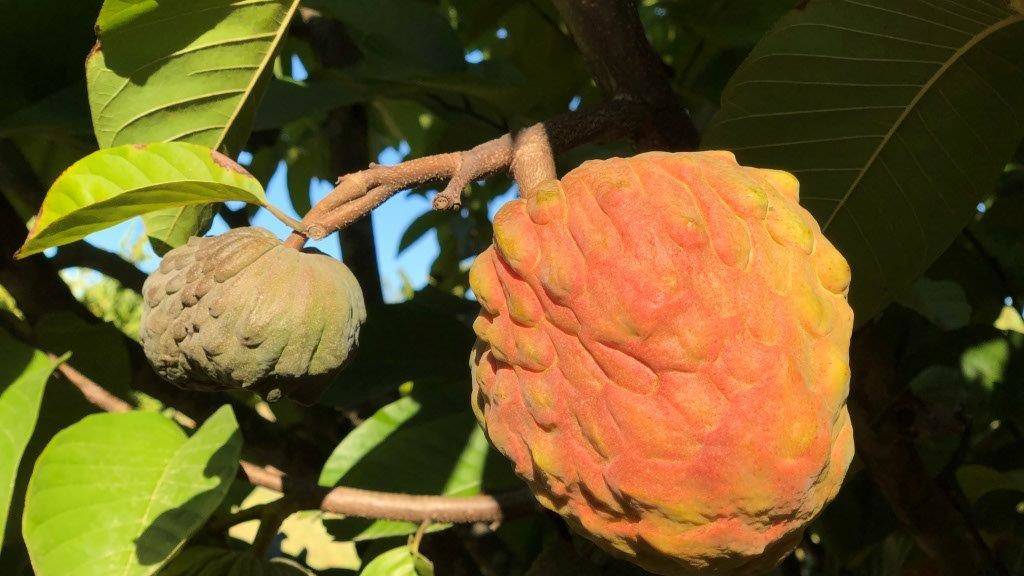 The PinksBlush variety of custard apple developed on Yanalla Farms.

A Glasshouse Mountains tropical fruit producer is ready to go big with a unique variety of custard apple, with a government grant helping to kickstart their next stage.

A Glass House Mountains tropical fruit farm has produced a unique variety of custard apple which could be available commercially within a few years.

Robert and Karen Martin of Yanalla Farms produce lychees, dragonfruit and custard apples on their Sunshine Coast hinterland orchard but it's their rare PinksBlush custard apple that they're focused on going forward.

Now the Martins have received a $4750 grant from the Queensland government's Small Business Artisan Producer Grants Program to help take their business to the next level.

Mrs Martin said they currently had 50 of the custard apple trees on their property but after securing the plant breeders' rights in 2018, they were looking to produce the variety commercially and will look to license it to other growers.

"We've got about 3000 plants which we've only just finished grafting... we'll start planting those out in January, February and then within two to three years we'll start harvesting a commercial crop from there," she said.

"We've had a few setbacks. We've had three hail storms over the last 13 months and that sort of damaged some of our existing custard apples that we had in the ground but we just have to bounce back and we can start doing it now that we've been successful in this grant."

The 22 hectare farm was last hit by hail on Sunday, destroying their dragonfruit crop, and ripping through bird netting over their lychee orchard to severely damage the young fruit.

Mrs Martin said the PinksBlush variety of custard apple had evolved naturally on the farm, with her father-in-law Bob Martin finding custard apples fruiting out of season on a single branch of one of their Pinks Mammothcustard apple trees about 20 years.

"My husband eventually convinced him to graft the tree and we have about 50 trees on the property now that are about 10 to 15 years old," she said.

"Each year we get a small crop off those.

"We know the variety works, we know it's not a one-off thing... now we're in the process of commercialising it."

Where the regular custard apple season runs from February to September, the PinksBlush harvest runs from September to December, a peak time for tropical fruits.

The Martins have been selling the PinksBlush custard apples to Melbourne markets for the last three or four years, selling seconds locally.

They hope to be able to expand sales into Brisbane, Sydney and Perth, eventually tapping into Asian markets like Taiwan, Thailand and Singapore.

"The fruit that we sold this year we received top dollar for and of course because there's nothing else on the market our agent keeps ringing up saying 'give me more, give me more' but we can't because there's just such a small number of trees," Mrs Martin said.

"As quickly as our trees grow we will push them out to consumers."

The Martins also have 3000 dragonfruit plants and about 500 lychee trees.

In future the Martins hope to shift away from dragonfruit to focus more on their lychee and custard apple crops.

"We don't believe that we're taking a risk with the number of [PinksBlush custard apple] trees that we've got because we've seen how it operates in the past, good and bad season and the feedback that we're getting from people is that they want more," Mrs Martin said.

The PinksBlush name pays tribute to its parent tree, the Pinks Mammoth while also recognising its pinkish-orange hues.

"I think what consumers like about it is the colour, that's certainly an attractant for them," Mrs Martin said.

"They like the blush of colour on the skin and that occurs naturally, depending on how much sunlight the fruit gets. If it gets quite a lot of sun, it'll have sun on one side of the fruit and the other side of the fruit that doesn't get the sun will still be a green colour.

"Each piece of fruit is a different kind of colour between a pink blush and an orange blush."

When it comes to taste, the family have found the fruit stacks up.

"It has quite a creamy taste to it," Mrs Martin said.

"I've done a comparison with another variety that is currently grown by commercial growers and it's not as watery... it still has seeds in it but there seems to be fewer seeds in our variety."

Mrs Martin said their variety has got a number of other advantages for growers.

"Because our fruit grows over the winter period, we don't get fruit spotting bug because it's too cold for them where the other varieties do get that and the fruit doesn't split on the trees," Mrs Martin said.

The variety is also notable for its staggered ripening rate, which means a single tree will have fruit at different stages of development.

"Farmers aren't rushed to pick all their fruit at once so you can have a number of picks across the season," Mrs Martin said. Robert and Karen Martin of Yanalla Farms on the Sunshine Coast hinterland.