A house with a connection to Mary Poppins' creator has become a Darling Downs tourist drawcard. But that's not the only enchanting thing about the house. 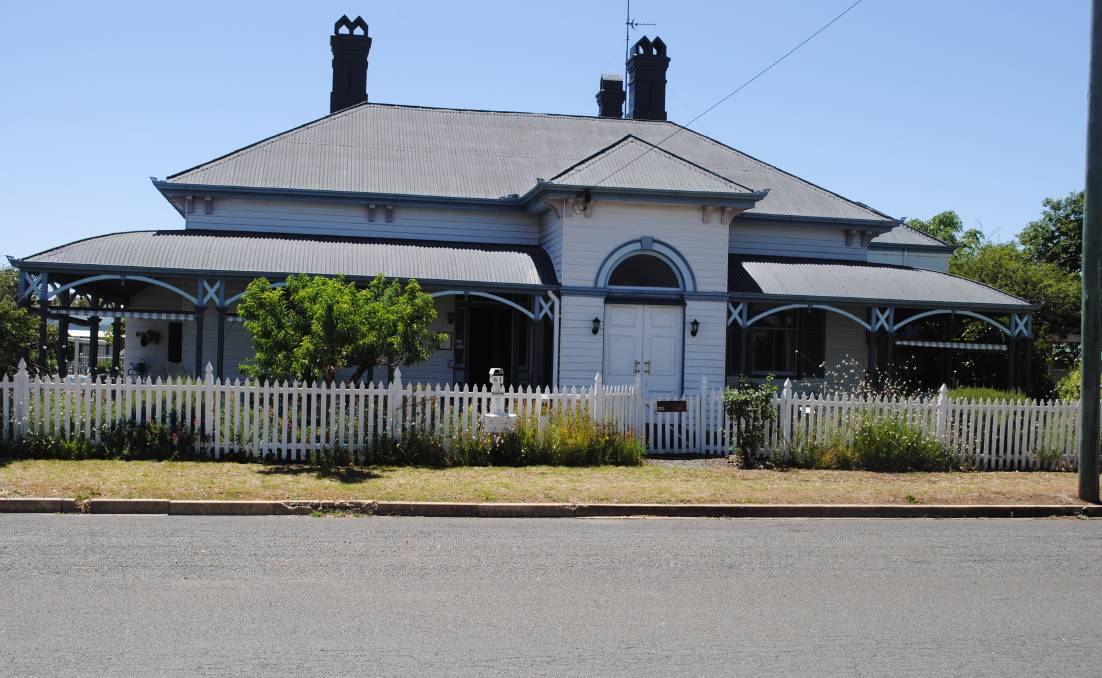 +13
The Mary Poppins House in Allora was constucted in 1879 as a bank premises and manager's house.

Mary Poppins has captured the hearts and minds of generations of children all over the world and nestled away in Allora is a window into the past of its creator.

We didn't have a clue about Mary Poppins or the history of it, it was just a nice Victorian house - Les Struthers

After moving to the UK at age 25, she took the name Pamela Lyndon Travers and adopted her pen name in 1933 while writing the first in the series of eight Mary Poppins books.

It was Travers Robert Goff's job that brought the family to Allora in 1905, where they lived until his death two years later in the bank manager's residence, built in 1879.

Now owned by Les and Loraine Struthers, the Victorian-style house is Allora's strongest connection to the magic of Mary Poppins and has even sparked a brush with Hollywood.

The Struthers, who divide their time between Bribie Island and Allora, offer tours of the Herbert Street house by appointment.

Mr Struthers, an architect by profession, immediately saw the potential in the house when the couple would drive through town to visit their olive grove at Allenthorpe.

"For 20-odd years we passed the house and we always used to say 'that's our house' but it looked so sad and dilapidated," Mrs Struthers said.

"It came on the market but it was the dearest house in Allora, so we said no... too old and too much money but then it came down by $200,000 so that was within our range."

But at the time they had no clue about its most famous resident, though the previous owner did briefly mention that it had been dubbed the "Mary Poppins house".

"We bought it purely for the style of it," Mr Struthers said.

"In my architectural practice I do historic house renovations and building and I said 'I'd love to buy that for myself'.

"We didn't have a clue about Mary Poppins or the history of it, it was just a nice Victorian house."

The Struthers bought the house in 2007 and set to work gradually restoring the house, which is set on an acre block.

When they took it on, there had been fire damage to the old banking chambers, verandahs were sagging with trees growing through them, each room had been painted a different colour and there were some holes in walls.

Newspaper clippings under the linoleum revealed details of the house's connection to P.L. Travers and the Struthers gradually came to know more about the history of their residence, reading biographies about the writer and getting in touch with various researchers.

Works done on the house by the Struthers include restumping, replacing some floors, repainting, renovating all of the cedar joinery, rewiring the house, fitting out the kitchen, building a bathroom and converting the bank chamber to a living room.

Being on the local heritage register also meant there were to limits to the alterations that could be done to the home.

But the Struthers wouldn't have dreamed of altering the structure anyway.

"What attracted us to it is it was a late Victorian house and there are very few of them in Queensland at all," Mr Struthers said.

"I've done houses up for people before and they want everything sanded back and I say 'no, that just spoils the patina in the place'.

"All the work, we just sort of cleaned it up and just keep it oiled, we won't sand it back because otherwise it could have been built yesterday and who would know?"

The house was designed by Queensland Colonial Architect Francis Drummond Grenville Stanley and built to be the bank premises and manager's residence for the Australian Joint Stock Bank.

Stanley's work can also been seen in notable buildings such as the Toowoomba Railway Station; Brisbane's General Post Office and the Maryborough Courthouse.

Unusually, the home boasts extremely high 14 foot ceilings. It also features six open fireplaces, still put to use during Allora's frosty winters and red cedar joinery, with the timber all from Queensland.

"All the cedar work is nice, unfortunately you can't get that cedar any more," Mr Struthers said.

"A lot of things were imported, obviously the vault door was made in London and you've still got a reference on the back of the door on how to fit it."

At the front of the home visitors can find what was once the banking chambers, now the living room.

A cedar panel on the side wall originally ran across the centre of the room to divide the public from the bank tellers, while the bank vault remains unrestored.

Furnishings include a piano purchased with the house.

Iron bars were once found on all banking room windows and the Struthers plan to find a way to display the 13 bars they have found one day.

"We didn't have Ned Kelly but we had Captain Thunderbolt just over the border," Mrs Struthers said.

The bank manager's office adjoins the room via two doors, one with the word manager emblazoned on it in gold leaf.

The wall colours in the office are original, matching those once found in the Toowoomba Railway Station.

What was once the bank manager's living room is now the main bedroom, also decorated in period style, down to a matching set of two 1870s armoires.

French doors open out onto one of the house's corner verandahs.

The second bedroom in the house was once the master bedroom and the room where Travers Robert Goff died after being ill for three days.

Adjacent to the bedroom is a nursery with weatherboard walls, built in 1905 for the Goffs' infant daughter Cecily by enclosing a portion of the verandah.

Another bedroom was shared by the young Helen Goff and her sister Barbara.

This room, unlike many of the others in the home, does not have its own fireplace, making it what would have been considered a safe room for children.

It is these days adorned with plain 1930s-style furnishings and an iron bed.

"The family would have lived out of travelling trunks," Mr Struthers said.

"They wouldn't have had too many personal possessions."

The original Victorian dining room with French doors has two particularly interesting pieces of furniture- a cabinet obtained from Allora's Blue Cow Hotel and a kitchen-style cabinet with multiple small drawers, found in one of the home's outbuildings and restored. While it now houses crockery, cutlery and other dishes, Mr Struthers suspects a different past purpose.

"We found ink stains inside the drawers so it was obviously used in the bank," he said.

A separate building at the back of the residence housed the kitchen and the maid's room, now used as a breakfast room by the Struthers.

The ceiling in the kitchen is lower than in the main house, at only 10 foot high.

The brick fireplace remains the centrepiece of the room, just as it would have been in the house's early days.

"Les spent many hours scraping off many layers of paint off the chimney with a glass of wine in hand," Mrs Struthers said.

While the kitchen was initially connected to the house via a walkway, building onto either side of the walkway has allowed the creation of breezy verandah between the two buildings.

Growing up through a hole in the verandah is an Isabella grape vine, planted by the Goffs when they moved to the residence from Maryborough in 1905.

The space in between the two buildings includes a modern bathroom, which by virtue of being outside and disconnected from the original structure, complies with provisions of the local heritage register.

In the backyard the coach house, stables and tack room remain, with the latter now housing an office.

The home was a bank premises and residence until 1935, with the Bank of New South Wales its last official incarnation.

Since then it has been a family home and has also housed a number of boarders over the years.

"There's been a lot of fires, where obviously there's been someone smoking in bed," Mr Struthers said.

"There was actually a bed in the vault.

"One local guy said he spent his wedding night here, in the nursery."

The release of Hollywood film Saving Mr Banks in 2013 signified another important chapter for the home and the Struthers played an important role during its creation.

The film delved into the story behind the filming of Mary Poppins in 1964, drawing heavily on the early life of P.L. Travers, with producer Alison Owen and director John Lee Hancock travelling to Allora for research.

The release of the film saw renewed interest in the home, sparking the Struthers to go down the tourism path.

"John Lee Hancock was saying his set designer was an architect as well, in Hollywood, and he said would I work with her and do the sets," Mr Struthers said.

"I did all the drawings and they built the house in Hollywood."

The cast and crew were also quick to chip in when the Struthers decided to restore Travers Robert Goff's grave in the Allora cemetery.

"We had a function here but we didn't raise much at all... I was telling Alison [Owen] about it," Mr Struthers said.

"I didn't ask them for money but they all just volunteered.

"Colin Farrell sent in more than half... he had an empathy with his part [as Goff in the film]."

These days people can book in to take a guided tour through the house and the Struthers dress for the occasion- Mrs Struthers as Mary Poppins and Mr Struthers as a bank manager.

The home has also been host to two small weddings, with couple tying the knot in a garden gazebo.

"As Alison, the producer, said to me, you'll be amazed at the number of people who will want to come knocking on your door," Mr Struthers said.

"The film really kicked along the visitors... we get bus groups and we get a massive amount of car clubs."

And of course, there's a special magic for visiting families.

"You get a lot of children come through and they all expect to see Mary Poppins," Mr Struthers said.