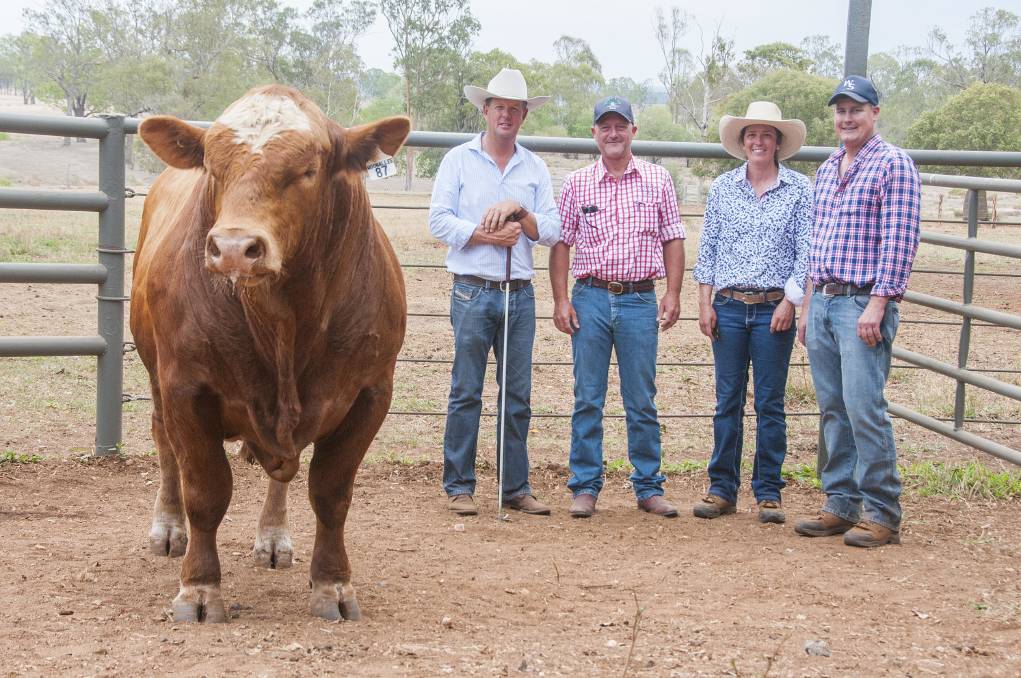 So impressed was he with the buyer support of the auction at Inverrio, home to Brett Nobbs' NCC Brahmans, Mr Baker said the sale "was here to stay" and planning would begin in earnest for the 2020 renewal.

He said the support of the Nobbs family and of Gowrie Simbrah, Charleville, which also offered stock, was integral to their success.

Collectively, Woonallee and Gowrie presented 107 bulls, 55 offered by the former and 52 from the latter.

"It was an outstanding result and a great start to what we hope is going be something very special in the future," Mr Baker said.

"Obviously we have a passion to continue this, so thank you to everybody who has supported us today.

"It has been a fantastic opportunity for the Baker family to be involved here. We are highly grateful to have the opportunity to work with the Nobbs family."

Nuriootpa (P) (R), just over 26 months of age, has an eye muscle area of 144sq cm and his P8 and rib fat measurements are 7mm and 6mm, respectively.

Nuriootpa (P) (R) was one of seven Woonallee bulls to fetch at least $10,000, Tom and Lynette Olive, Apis Creek, Marlborough, paying the next highest price at $12,000 for the 26-month-old Woonallee N Nutshell.

Tipping the scales at 870kg, Nutshell is by Woonallee Fetish (S) from a purebred Simmental cow and features a scrotal circumference of 41cm, motility of 85pc and an EMA of 132sq cm.

The first of the "five-figure" bulls off the Woonallee line came early when Eric and Lyn Slack-Smith, Gladevale, Richmond, paid $10,000 for the second lot on offer.

Charlie Taylor, Maleny, signed for the 916kg Gowrie N243 after prevailing in a tense bidding duel.

Tracing to Gowrie Dominator through his sire Gowrie Hero, Mr Taylor's newest acquisition can claim an EMA of 134sq cm, scrotal circumference of 44cm with motility of 70pc and an IMF percentage of 3.4 with P8 and rib fat measurements of 9mm and 6mm.

The next most expensive of the Simbrahs was Gowrie N339 bought for $15,000 by Last Pastoral Company, Biggenden.