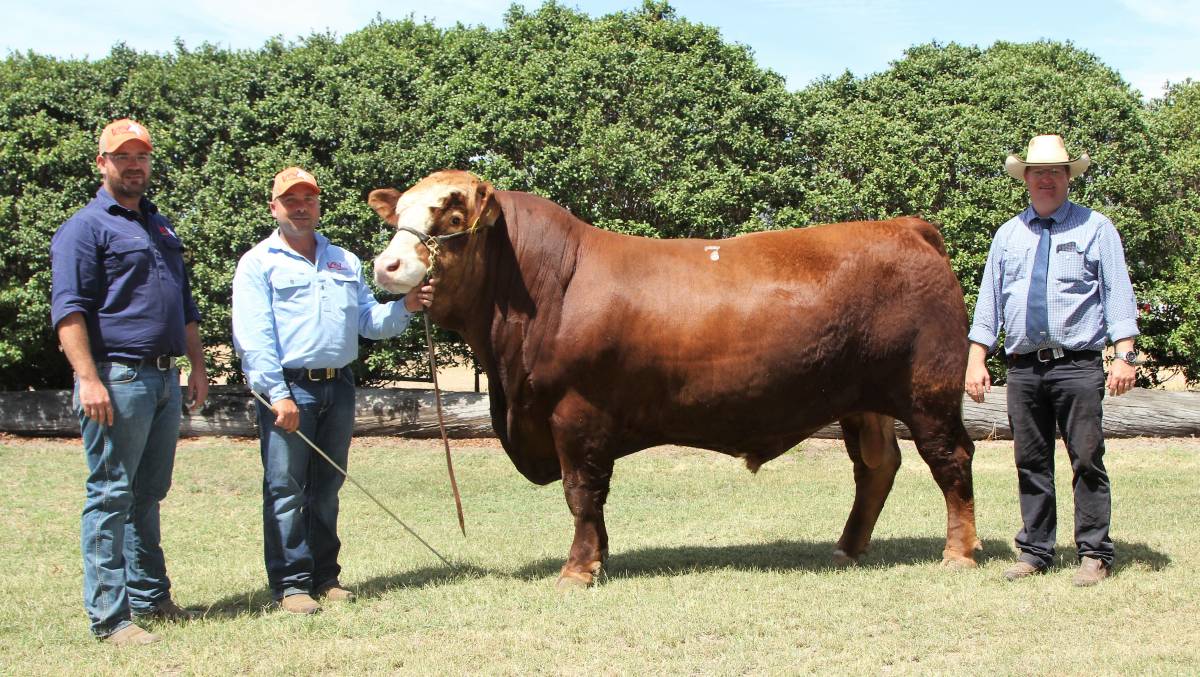 It was a magic result for Stephen Lean and Marty Rowlands of KBV Simmentals at the fifth annual Meldon Park Simmental bull sale at Moura on Monday, selling the sale's top priced bull.

It was a magic result for Stephen Lean and Marty Rowlands of KBV Simmentals, invited vendors at the fifth annual Meldon Park Simmental bull sale at the Billabong Sale Complex at Moura on Monday, selling the sale's top priced bull.

Mr Tuckey congratulated the KBV co-owners, based at Murphy's Creek in southern Queensland, for doing the homework to achieve J-BAS 7 status, enabling the deep red son of MRL Red Whiskey to be exported to WA.

Mr Tuckey is the president of the WA Simmental Association and first saw KBV bulls via Ekka social media coverage.

He said Norbert, a heterozygous poll, was a total outcross not only to anything he owned but to anything in WA.

"He is structurally outstanding; I couldn't fault him as a sire," Mr Tuckey said.

He has 40 purebred cows and said he liked Norbert's deeper colour, which seemed to sell better in WA's south west.

At 28 months Norbert had an eye muscle area of 142 square centimetres, an intramuscular fat measurement of 6.2 per cent, a scrotal circumference of 40cm, and semen motility of 80pc.

Mr Rowlands said he was the first of import Red Whiskey sons to be offered in Australia, which they had used as an outcross red sire for softness and depth.

"Norbert carries a lot of the traits we try and achieve - he's commercially oriented with carcase traits," he said.

KBV sold one other bull, Newton, also a double poll by MRL Red Whiskey, for $9000 to the Appleton Cattle Co, which operates seven properties across the Belyando and which runs an internal stud operation to breed replacement bulls.

"We had a very good day and feel humbled with the result, selling both our bulls to studs," Mr Rowlands said. "We extend our thanks to Rod and Lis Skene for inviting us again." 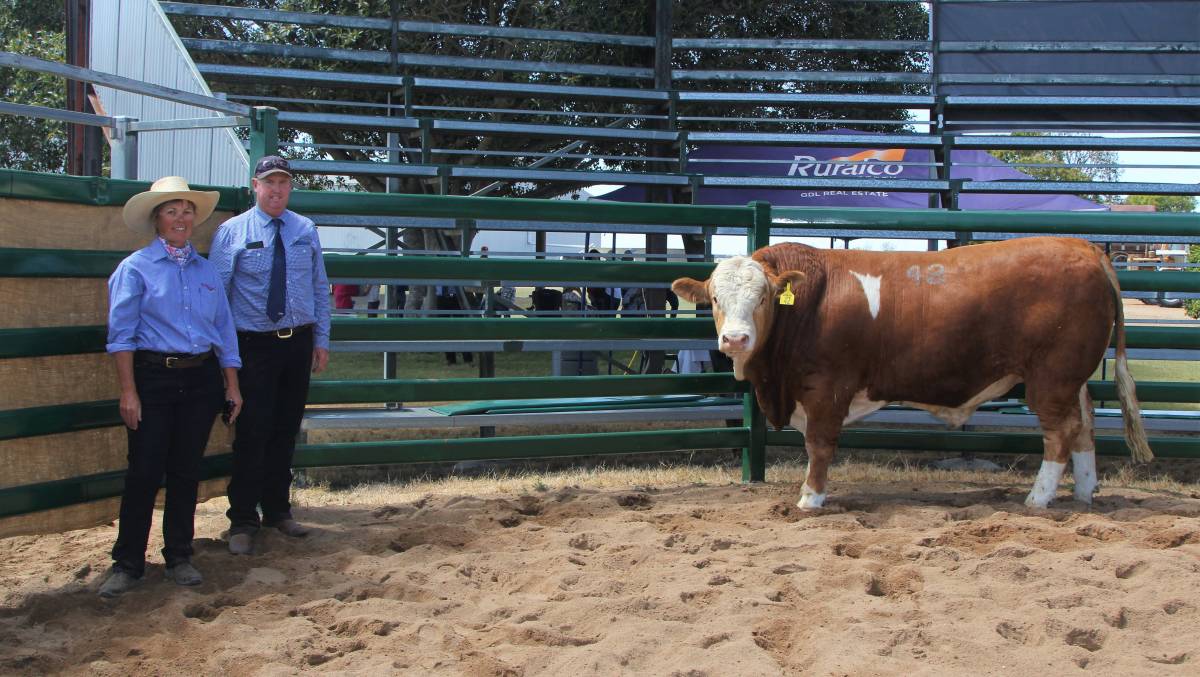 The Skene family, based at Cecil Plains on the Darling Downs, recorded a top price of $12,500 for Meldon Park N207 (P), who was sold to Peter and Rebecca Scholl, Eidsvold.

Sired by Woonallee Lampoon (P) from Meldon Park Facebook (P), Mr Skene said he was definitely the longest of Lampoon's sons in the sale

They purchased Lampoon for $37,000 for his early maturing and softness and this is the first year they have had his offspring for sale.

Mr Skene said both Niagra and Navigator, as well as being dehorned, were four to five months younger than the bulls they were placed beside in the catalogue.

The sale average and top prices were down from last year's success, when Beef 2018 and Ekka 2018 Champion of Champions pair bull Meldon Park Matador commanded plenty of interest, but Mr Skene said they had more than half expected the decrease in the ongoing dry weather.

"We had lots of new clients though, which I like to think is down to word of mouth," he said. "And Simmentals have been in the news. It helps that we won at Beef."

The price of $9000 was the lucky number for the sale's third vendor, Navillus Park, Obi Obi, who reached that price twice, once for a purebred Simmental bull and once for a Simbrah bull.

Stud principal Jason Johnston said the Simbrah bull's dam had been bought from Darren and Michelle Parker's herd at Murgon, which they had tried lots of crosses with.

It was Droughtmaster sire Redskin Grinner that gave them good nose pigment and sleek coats.

"The progeny have Simmental traits but they're tick resistant," Mr Johnston said.

"The Simbrah results surprised me today.

"We've been selling them out of the paddock to the Northern Territory and WA but we bought a few here to see how they'd go, and to support the Skenes. It was a bit unknown."

Elite Livestock online bidding had 17 bidders and 39 viewers, and the top-priced bull was purchased through the online system.