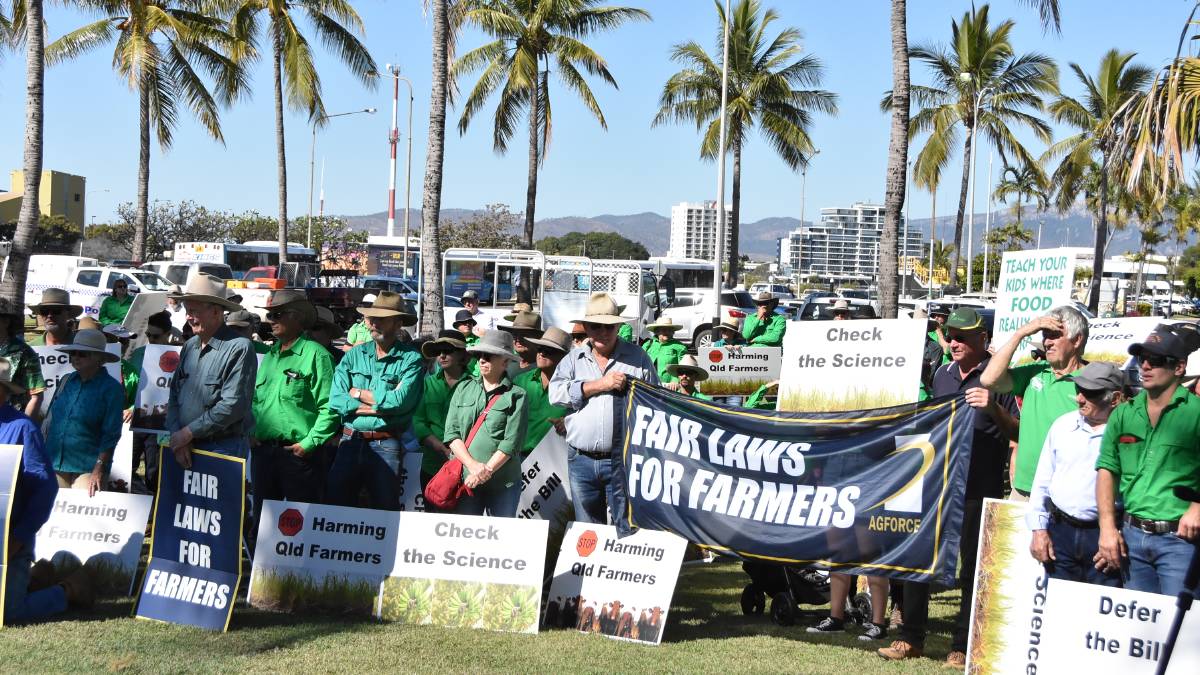 Controversial Great Barrier Reef legislation is being debated by the Queensland parliament less than two weeks after it wasn't ready for debate before an audience of growers in Townsville. Picture - Jessica Johnston.

Less than two weeks after the state government said its Great Barrier Reef legislation wasn't ready to be debated in the parliamentary sitting in Townsville, its second reading has been introduced to the House in Brisbane.

Less than two weeks after the state government said its Great Barrier Reef legislation wasn't ready to be debated in the parliamentary sitting in Townsville, it's second reading has been introduced to the House in Brisbane.

She cited the need to improve the quality of water flowing into the Reef and said the government was making several key commitments following calls from the agricultural sector.

She described it as a textbook example of a thorough, consultative process.

Her comments were rebutted by opposition environmental spokesman David Crisafulli, who said the parliament was being asked to vote on a massive piece of legislation without even seeing the associated regulations.

"It has been shameful the way people have been treated through this process," he said. "Real consultation would look like a Premier who would be prepared to meet with these people but she hasn't been willing to meet with groups who represent thousands of people across dozens of industries."

He announced that the opposition would be opposing the legislation and moving amendments, describing that as the "last chance saloon" for government MPs in coastal seats impacted by the legislation.

Also slamming the government for forcing its Reef Protection Bill through parliament without considering the destructive impact it will have on regional and rural Queensland producers and their communities was peak lobby group AgForce.

CEO Michael Guerin said the government had added administrative, operational and financial burdens on an industry already stifled by confusing red tape, not to mention drought, flood and fires

"By failing to listen to the small number of sensible and practical amendments proposed by AgForce and others, the Palaszczuk government has delivered a sickening blow to an industry that contributes $14 billion to the state economy and provides direct employment for 57,000 people," he said.

Mr Guerin described Minister Enoch's media statement, which declared the Bill a win for primary producers, as "a gross insult to the intelligence and goodwill of primary producers across the state".

"The press release had the front to masquerade a couple of cosmetic changes as genuine and deep collaboration with the agriculture industry," he said.

"Despite what the government may think, farmers are neither naive nor unintelligent and see this as the bovine fertiliser that it is."

Mr Crisafulli said water quality improvements could be achieved by strengthening the Best Management Practice program and with more investment, instead of pitting growers against communities for vested green interests.

"The truth is, while those opposite will seek to use this debate as a one way or the other, as a tool to say these people don't support the Reef, I hope I've been able to make it clear that I will not walk away from doing more.

"Times have changed. Improvements are needed by working together, not by pitting farmer against community."

The four new elements in the legislation include no further changes to the minimum standards in the regulations for five years, which Ms Enoch said gave industry certainty going forward and was what stakeholders and local MPs had asked for.

"If the standards are significantly amended after this time, the law requires that this would only be done after public consultation and consideration of the costs and benefits of the change," she said.

Mr Crisafulli described that as "a five-year blank cheque to continue to abrogate the responsibility of this House", adding that the most frightening part of what was being debated was that it was asking parliament to "blindly hand over powers to set the farming practices of industries throughout the state to an un-elected bureaucrat".

He said they were Orwellian-like powers.

Another aspect of the regulatory package the government is changing is the regulation about additional data.

"While the Bill is not being amended, the government will not be making a regulation about data collection at this stage and instead will seek to work voluntarily with industry to collect relevant data," Ms Enoch said.

That was condemned by Mr Crisafulli, who said while the wording wasn't mandatory, unless the words relating to the production, distribution, supply or use of an agricultural ERA, a product, a fertiliser, or chemical, were changed, he feared the worst.

"It pits grower against farm consultant," he said.

"It certainly pits grower against supplier, where all of a sudden the guy you buy your fertiliser off is worried because you might have Big Brother knocking on your door.

"I wonder if it pits on-farm worker against farm owner, and if that's the case that truly is a sad day for the relationship."