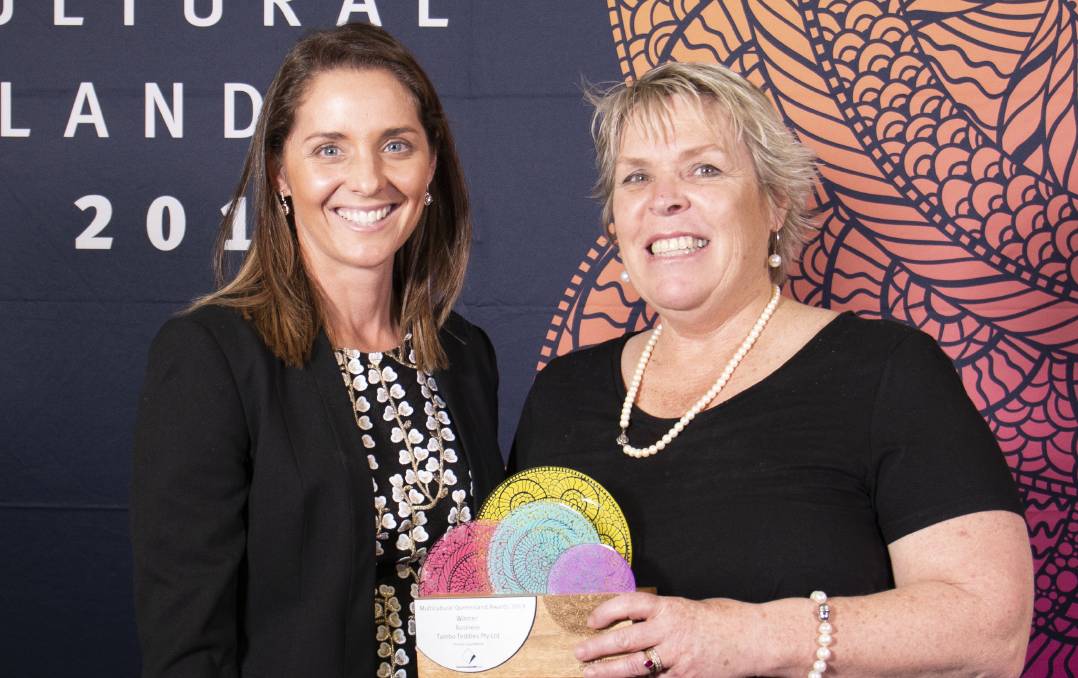 New Australians making an iconic Australian product - it's a synergy that has helped win Tambo Teddies a Multicultural Queensland Award.

New Australians making an iconic Australian product - it's a synergy that has helped win Tambo Teddies a Multicultural Queensland Award.

Held to recognise the contributions of Queenslanders who support and promote an inclusive, harmonious and united community, the market leader in handcrafted sheepskin teddy bears, based in western Queensland, received the business category award in acknowledgement of the employment opportunities they'd provided for newly arrived refugees.

The other finalists for the award were Brisbane-based software company RedEye Apps with 86 employees across Australia, the US, Asia and New Zealand, and Randstad, a recruitment agency that partnered with Multicultural Development Australia to run a six-week mentoring program.

It's not the first time Tambo Teddies has won a prestigious award - in 2015 its use of the internet to grow the business saw it named the winner of Australia's Regional Online Hero competition from a pool of 170 entrants.

When it became apparent to Tambo Teddies owners Alison Shaw and Tammy Johnson that they weren't able to source sewers locally in the town of 350, they set up a regional sewing hub in Toowoomba at the start of this year, with help from Multicultural Development Australia.

From the 14 who attended a come and try day, three sewers, two men from Syria and a woman from Eritrea, began working for Tambo Teddies in February, along with a woman who had sewed previously for them from Charleville plus a Toowoomba-based seamstress who was already employed by the company, who became the hub's overseer.

"It was a risk for our business, to take much of the sewing away from Tambo, but we had no opportunity to grow the business otherwise," business owner Alison Shaw said, explaining that they hadn't been able to source enough permanent employees locally.

"To make the business viable we had to look at this change.

"One of the keys to our business is that the bears are labelled Australian made - that's critical.

"We think it's nice that we're using new Australians to make Australian products, and they really embrace being a part of Tambo Teddies."

The award acknowledged the importance of employment as the first step in resettlement, Ms Shaw said.

One of the biggest barriers to negotiate can be the lack of English as the primary language, which Tambo Teddies has overcome in a number of ways.

As well as undertaking English classes as part of the resettlement process, Ms Shaw said the common language between the three immigrants was Arabic.

"Our Eritrean sewer is the go-between - she has good English comprehension so she translates for the men."

As well, MDA translated instruction sheets for the new workers and videos were made to help demonstrate sewing techniques.

Ms Shaw said they had all sewn before and their work was of a high standard.

She said there was potential to grow the business using the regional hub model but their first priority was meeting current demand.

"The demand has been fantastic and we are meeting it, but we need a stockpile of Teddies before we can consider expansion."

She said people had suggested moving the sewers to Tambo, 750km from Toowoomba, but she believed it wasn't that simple.

"There's not the wraparound services to support them," she said.

"It's something government probably needs to look at - it has to be a well-managed process.

"They would have their families with them, and the community needs to embrace them, although regional communities generally do that well."

Tambo Teddies was born in the drought of 1992 by three local women - Helen Sargood, Charm Ryrie and Mary Sutherland - who were looking to provide employment and an alternate business opportunity, and to showcase the wool the district is renowned for growing.

The team of Alison Shaw, Tammy Johnson and Kiralee Fox took over the business in 2014, building a digital strategy that boosted its global reach.