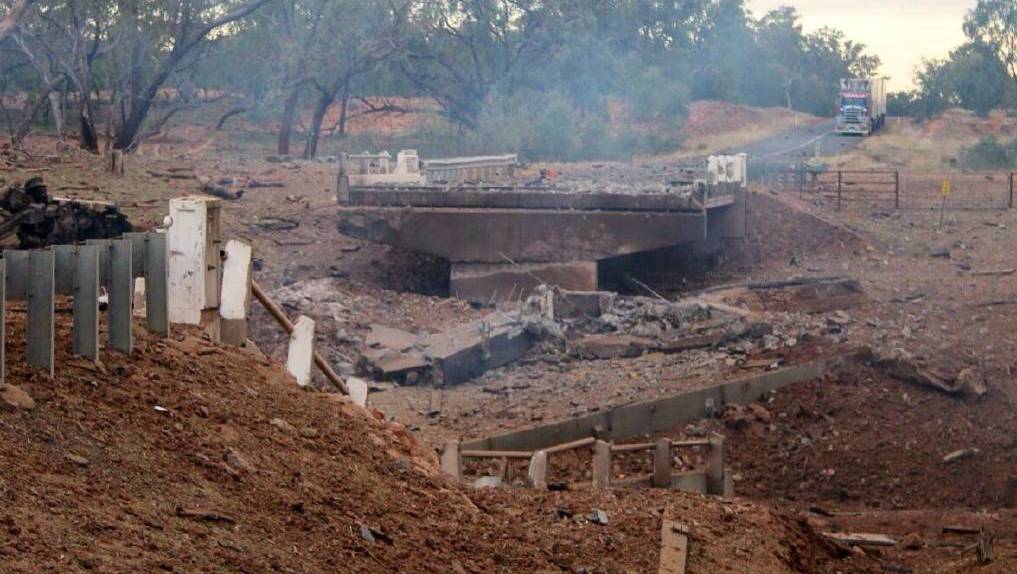 The Angellala Creek bridge on the Mitchell Highway after it was destroyed in the 2014 blast. Photo: Queensland Police.

Two multi-million dollar lawsuits against the trucking company and driver behind the 2014 Angellala Creek bridge explosion will continue after a Supreme Court judge dismissed applications to forego a trial.

Two multi-million dollar lawsuits against the trucking company and driver behind the 2014 Angellala Creek bridge explosion will continue after a Supreme Court judge dismissed applications to forego a trial.

The state government and Queensland Rail are both suing truck company Kalari Propriety Limited and driver Anthony Eden over the 2014 incident, which saw the road badly damaged when a road train exploded after it veered off the Mitchell Highway and rolled on September 5.

The truck was carrying prilled ammonium nitrate at the time.

While Kalari held two policies of insurance, one with Dornoch Limited and one with Zurich Insurance Limited, only Zurich has paid out from their policy, with a sum of $2.5 million.

Dornoch Limited refused to indemnify Kalari and Mr Eden and was then joined to the claims as a third party.

But Dornoch made applications to the court saying that exclusion clauses in the policy apply to the 2014 incident and that no trial was necessary.

Mr Eden and Kalari have pleaded in the court proceedings that the prime mover caught fire and Mr Eden then drove the vehicle from the road.

They claim that in that manoeuvre the vehicle rolled, leading to the explosions.

Dornoch alleges that Mr Eden and Kalari did not have the correct dangerous goods insurance and also submits that the vehicle must have left the road either through driver error or because of a defect in the prime mover, making it unsafe.

Justice Peter Davis handed down his judgement on Thursday in Maryborough, dismissing both applications.

In his written reasoning, Justice Davis said Dornoch's point about the manner of driving must fail.

"The pleadings show that there is a dispute between the parties, including the plaintiffs as to the cause of the accident," he said.

"The defendants raise defences to the statutory claims and negligence is denied.

"It may well be that once the trial judge determines the cause of the accident, one of the provisions identified by Dornoch may be found to have been offended, thus enabling Dornoch to avail itself of one of the two exclusion clauses.

"Resolution of those issues requires a trial."

Justice Davis also noted that the defendants do not agree to Dornoch's proposed construction of the policy regarding dangerous goods insurance.

"Further, Dornoch seeks to have the questions of construction determined in circumstances where the policy and legislation would then be applied to facts still in dispute.

"In those circumstances, it is appropriate to dismiss the applications."