Four years on from a horror farming accident, champion Ekka wood chopper Jake Dingle has been reunited with the LifeFlight critical care flight nurse who helped save his life.

Four years on from a horror farming accident, champion Ekka wood chopper Jake Dingle has been reunited with the LifeFlight critical care flight nurse who helped save his life.

Mr Dingle crossed paths with nurse Renee Bolot at the RACQ LifeFlight Rescue stand at Ekka on Tuesday, looking a far sight better than the last time they met.

While he spends his days at the Ekka putting on a spectacular show, wood chopping for crowds of fans, few would know the material with which he's so familiar - timber - came heart-stoppingly close to claiming his life in August 2015.

Born and bred in the North Burnett, Mr Dingle was mustering on a family property in between Mundubbera and Gayndah when he was impaled by the tip of a fallen, dead tree.

"As I cantered past on my horse, I didn't realise the tree was there and it went in at my knee, through my thigh, all the way up to my groin," Mr Dingle said. 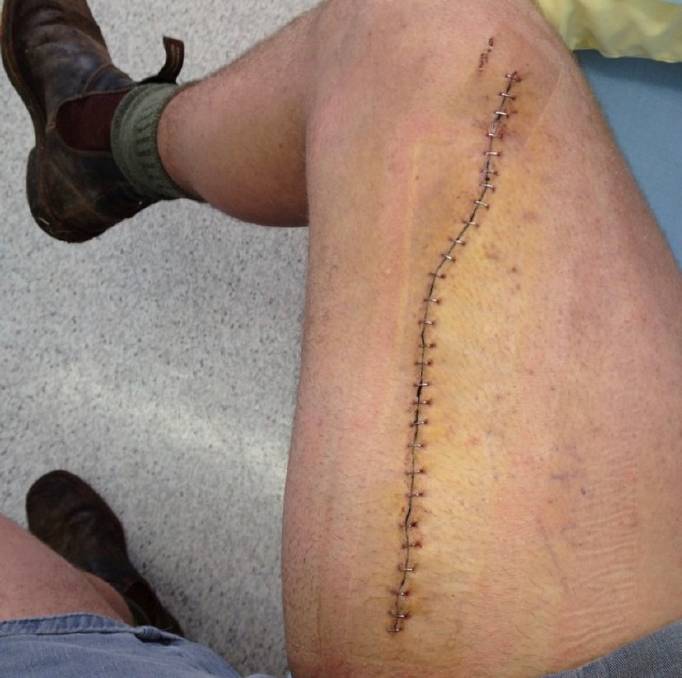 By a stroke of luck, the piece of wood stopped just short of Mr Dingle's femoral artery.

He was urgently taken to Gayndah Hospital, where an RACQ LifeFlight Rescue helicopter was waiting.

Brisbane-based critical care flight nurse Renee Bolot said airlifting a patient with his leg still skewered by a tree branch was a mission she wouldn't forget.

"It had been a busy morning and while we were at a Brisbane hospital dropping a patient off, the call came in that we needed to go to Gayndah," she said.

"Within an hour and a half, we were landing at the hospital and ready to provide Jake the critical care he needed.

"I'd seen a lot in my time as a flight nurse, but that job will stay with me for a while; he came so close to a very different outcome."

Mr Dingle was flown to Bundaberg Hospital, where the piece of branch was removed and he received thirty staples in his leg.

Thanks to RACQ LifeFlight Rescue's quick response and critical care, he was able to make a return to his beloved sport and has gone on to become an Australian champion.

An Ekka stalwart at 27 years old, he's been competing in wood chopping at the Royal Queensland show for nearly 15 years.