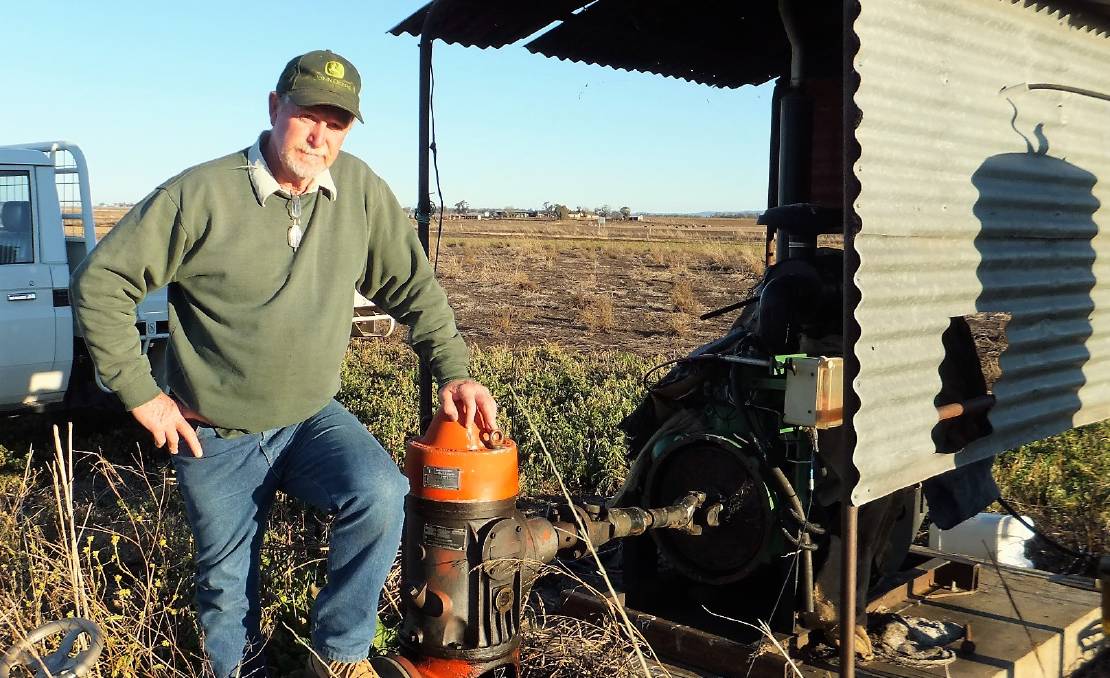 Warwick's Ross Bartley is one of hundreds of affected farmers with questions for the Department of Natural Resources over the way it has dramatically altered groundwater irrigation licences in the area. Photo supplied.

Upwards of 500 people are expected to pack the Swan Creek Hall near Warwick for a meeting on Thursday morning after being hit with news of vastly restricted watering limitations.

Upwards of 500 people are expected to pack the Swan Creek Hall near Warwick for a meeting on Thursday morning after being hit with news of vastly restricted watering limitations.

Many of the 925 irrigators in the Condamine Balonne Underground Water Management Area didn't receive notification of the changes until after they came into effect on July 1.

One of the meeting's organisers, mixed farmer Ross Bartley said no good reason for the change from unrestricted pumping to night pumping on two days a week had been given, and no consultation had taken place.

Irrigators in the Upper Condamine Alluvium and Upper Condamine Basalts wanting to pump outside those hours have been told to make a submission to the Department of Natural Resources to install a water meter to allow them to pump water when it suits.

Mr Bartley, a former deputy mayor of the Southern Downs Regional Council, said they accepted that mandatory metering was inevitable but said it should have been done via an intensive consultation process such as happened in the Dalrymple Creek area.

He said this had taken over 12 months and had resulted in concessions that worked for all parties.

A departmental spokeswoman said it had hosted a number of meetings with irrigators and the community across the Darling Downs in the last two weeks of May regarding limitations on the extraction of groundwater.

"While we always endeavour to engage with the wider community, we apologise to anyone who received late notification," she said, adding that staff would be attending Thursday's community meeting to talk about the restrictions and to investigate establishing a group of representative entitlement holders in the groundwater areas involved.

According to the department, pumping limitations were set following a recent assessment of the aquifers and the impact of ongoing drought on water levels.

Mr Bartley countered by saying water levels were five to seven metres higher than in 2008 and unrestricted pumping had happened then.

"There were stream flows in January and February that topped up water levels," he said.

"This is about metering, no doubt about it, and they've gone straight for the jugular.

"It's a very difficult time for us, and three days just isn't enough time to get meters installed, by a certified installer."

Letters dated June 26 and received by priority mail by some on June 28 advised of the changes to come in on July 1 and said, "any submissions made proposing to operate different pumping times will require you to install a meter that meets the Queensland interim water meter standard for non-urban metering".

While meters aren't required to be validated in these areas at this stage, the letter highly recommended consulting with a certified meter installer to ensure the meter and associated pipework met the standard.

Mr Bartley said apart from the hundreds of impacted irrigators being able to find a certified person to do the work in three days, it would involve costs of above $2000.

"A lot of it is older-style irrigation systems that weren't set up with metering in mind," he said. "They've got to give us time, and conditions to give us the latitude to operate effectively."

He said dairy farmers who had pared their herds back to the bone already were most immediately impacted.

"They won't have enough feed now, and even if they could find hay to purchase, lucerne is $1000 a tonne at the moment.

"Everyone is very careful with their water - it's very emotive issue, but there are real issues at play here, animal and human.

"Animals will lose condition, and the little bit of income being derived will be constrained dramatically by this."

Mr Bartley said those impacted understood there were benefits to metering, such as saving allocations and selling to neighbours, but it all depended on negotiations made during a consultation period that had been denied this time.

The meeting will begin at 10am at the Swan Creek Hall. Local MP James Lister has indicated he will attend but Natural Resources Minister Anthony Lynham has a prior engagement.