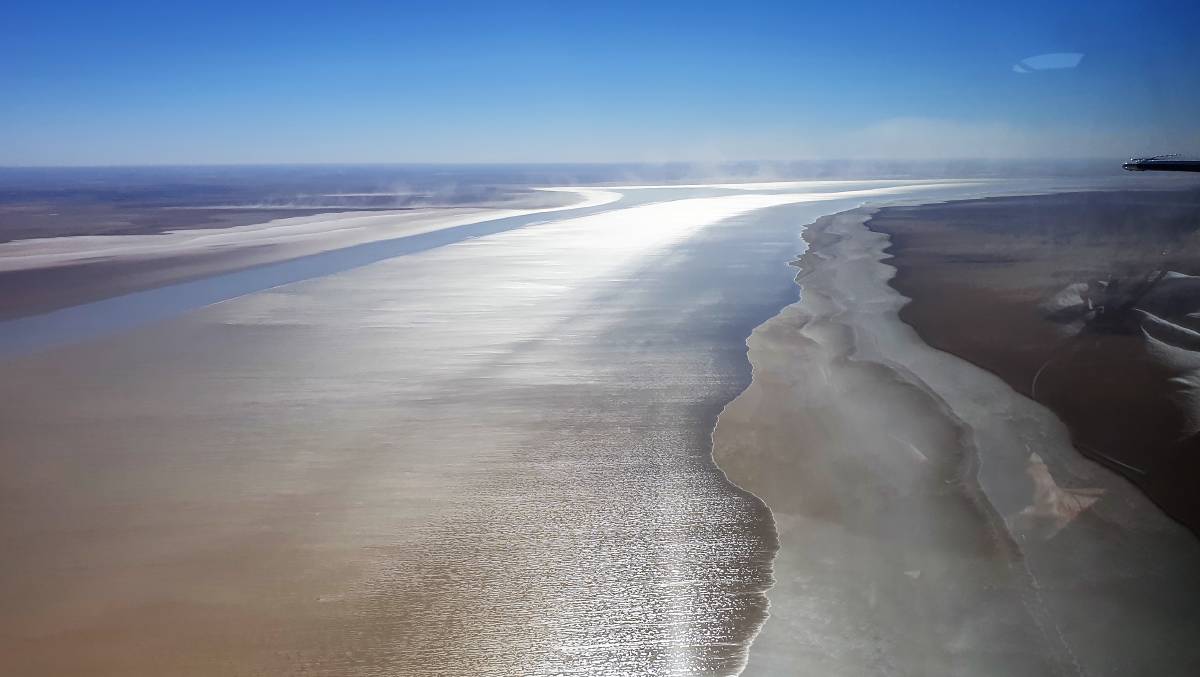 The last of the Cyclone Trevor floodwater flowing down the Warburton Groove into Lake Eyre. Outflows from evaporation are now matching inflows, according to the Bureau of Meteorology.

Every cloud has a silver lining and for February's devastating monsoon in north west Queensland, that lining is now radiant in the western and southern parts of the Channel Country.

Every cloud has a silver lining and for February's devastating monsoon in north west Queensland, that lining is now radiant in the western and southern parts of the Channel Country.

For cattlemen like Geoff Morton the sweet green carpet of river sorghum, clovers, sugar and pepper grasses, button grass and Flinders grass grown in the wake of the mini-tsunami that swept through in April has saved them from their own form of destitution.

"We've had 11mm of rain this year, on top of 40mm last year," the Birdsville producer said. "Our outside country is the worst I've ever seen it."

They usually get 18 months to two years of feed from a flood like this but with the heavy stocking the pair will have to do, it will be lucky to last them until Christmas.

"It's intensive farming Diamantina-style," Mr Morton said. "The selling season will be short, down to three weeks rather than the usual eight because everything will be close." 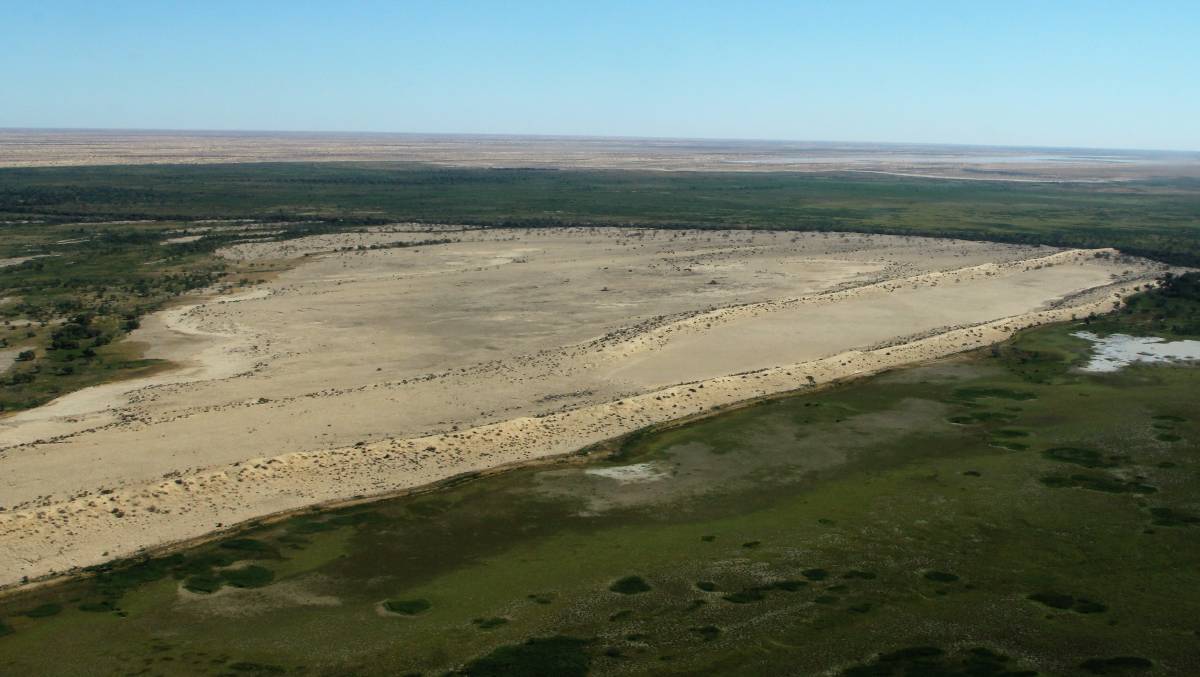 Some 195km south of Birdsville, fats are already being mustered from the Angus cross base herd run by Viv Oldfield and Donny Costello on Clifton Hills, the world's second-largest grazing property.

Cattle responded quickly to the herbage that grew in Goyder Lagoon from the water that came down the Diamantina River system in April, manager Peter Nunn said.

This year's flood is their biggest since 1991, eclipsing the 2011 flood in that part of the world, covering a quarter of the 16,510 square kilometres (over four million acres) of land they own.

The night the rain set in a thousand kilometres to the north, Mr Nunn had been on the phone to agents planning the imminent destocking of the vast property.

"We benefited off others' misery but we knew then we were going to get a good flood," he said.

Took the kids for a fly down the Diamantina River to see the flood heading to Lake Eyre.
This is the water just above Birdsville still coming down the river! pic.twitter.com/lTez7VFhMY

"That saved the show," Mr Nunn said. "There's a lot of mouths on but we'll truck a lot out, to the ANG meatworks in Dandenong."

He expects the feed to last them now until after summer.

While much of the country is still drying out from the second inundation from Cyclone Trevor, slowing the program down, stock are happily eating their way towards the middle of their lunchbox.

Mr Nunn said the first flood was different to what they usually experienced, rushing down the channels rather than slowly trickling a few inches high across the land.

Mr Morton experienced the same thing, of the first water not spreading out the way it usually did.

He wishes he could have banked the second flood, saying while it was later in the year and would keep the feed fresh longer, it would have done them more good next summer.

When the monsoon trough stalled over north west Queensland in February, all eyes were on the Flinders River and its enormous rush to the Gulf of Carpentaria, swallowing everything in its path.

Much less destructive was the flood in the Diamantina watershed to the south, where Davenport Downs manager Ross Myhill said the water had spread out wider than he could have ever imagined.

"It was a privilege to see such a massive flood on Davenport. There was so much water, and so much force behind it," he said.

Despite soaking vast stretches of floodplain and filling gilgais and waterholes for hundreds of kilometres, about 4000 gigalitres passed Birdsville in early April, flowing into Warburton Creek and then to Lake Eyre.

Bureau of Meteorology hydrometeorologist Paul Lainio said from the same event, around 2000Gl had flowed down the Georgina to just past Glengyle, south of Bedourie. 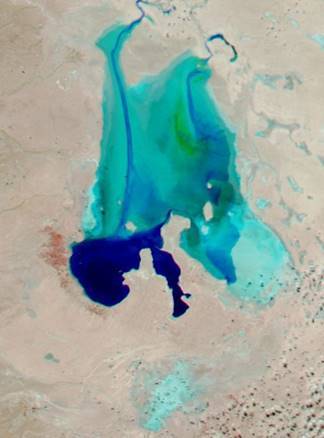 A satellite image of Lake Eyre North supplied by the Bureau of Meteorology.

While it was February's rain that put half the water in Lake Eyre and started the sight-seeing feast, March's ex-Cyclone Trevor rainfall reinvigorated the flow along the Diamantina into the Warburton.

This time water also flowed all the way along the Georgina and then Eyre Creek, joining the inflow to the Warburton enroute to Lake Eyre. There is no water in Lake Eyre South but whole lake complex has been estimated at three-quarters covered.

"This the most lake coverage since 2011, when Lake Eyre North and South were both covered," Mr Lainio said.

The water from the Cooper Creek flood that came with Cyclone Trevor's rain in March petered out in the Coongie Lakes region.

The inflow has now eased to the point that Lake Eyre is no longer filling, and outflows through evaporation are now matching inflows from flooding.

South Australian park ranger Tony Magor said some reports of the best wildflower and birdlife displays in many years had been badly exaggerated.

"Across the whole catchment, only one part got good rain," he said. "Saying it's the biggest event in 45 years is so incorrect it's not funny."

Mr Magor said the banded stilts that live on Australia's southern coast were a good indicator of how large the event had been, as they flew up to the lake to breed when there was good water coverage.

"At the last look, there were only a handful, the scouts.

"So that's saying the resources aren't there for them to breed."

Mr Magor said this flood had been interesting because it had brought a thin green strip amid the dry land.