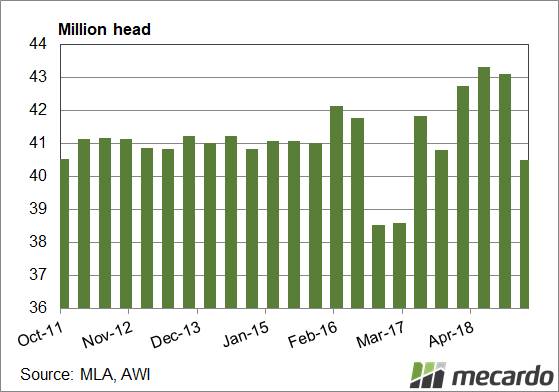 There is little doubt the sheep flock is on the wane with the dry weather. Considering the strong sheep and lamb slaughter rates, we thought the flock decline would have shown up last year, but the official Australian Bureau of Statistics (ABS) numbers suggested that as of June 2018 it was yet to materialize.

The Meat and Livestock Australia (MLA)/Australian Wool Innovation (AWI) survey reported the February-19 number of breeding ewes on hand was the lowest since 2017, at 40.4 million head (Figure 1).

A decline of just over 2 million ewes in a year is not great news for lamb or sheep supply for the coming year. On the east coast, the supply dearth is worse (Figure 2).

WA has gained 800,000 head, or 12pc, as a reasonable season and strong wool and lamb prices did what we would expect. SA also gained 7pc, which, combined with WA helped cushion the large falls in other states.

The MLA/AWI survey reported massive 40pc declines in Queensland and Tasmania, with absolute numbers of 800,000 and 900,000 head respectively for the two smallest sheep states.

The two largest sheep states, NSW and Victoria, have the same declines by number, 800,000 in NSW and 900,000 in Victoria, but percentage wise they were obviously a lot smaller. The east coast breeding ewe decline came in at 3 million head or 8pc. 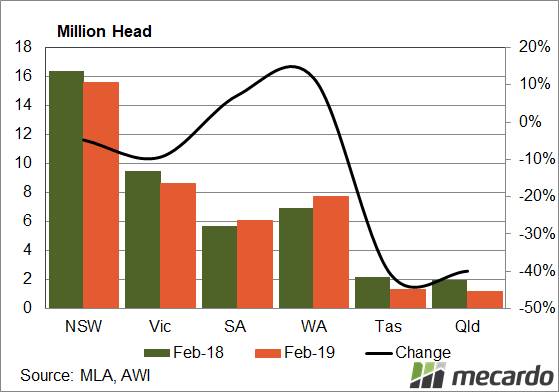 FIGURE 2: Breeding ewes on hand- state. This chart shows the state by state decline or increase in breeding ewe numbers of the past year.

What does this mean?

The shift in breeding ewe flocks should have predictable impacts on lamb and sheep supplies. WA should see a lift in lamb supply this year, and likely further flock building.

On the east coast, a 3 million head decline in the breeding ewe flock should result in a 2.5-3 million head fall in the lamb crop, purely from having fewer ewes. This depends on how marking rates behave for autumn and spring lambs, which is where much of the year's lamb supply comes from.

However, they would have to be extraordinary to make up for the significant dearth in ewes.

The story Fewer ewes in the east, but more in the west first appeared on Farm Online.