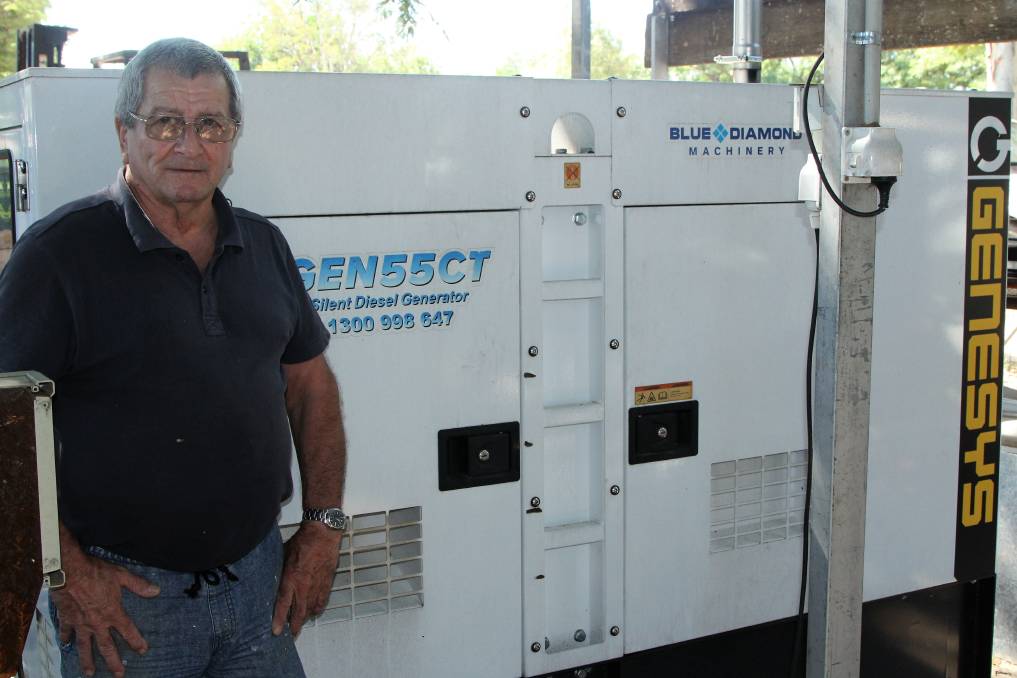 Patrons at the Barcoo Hotel in Blackall are having their beers cooled by a diesel generator, thanks to ever-escalating power bills and an inability to reduce power usage.

Patrons at the Barcoo Hotel in Blackall are having their beers cooled by a diesel generator, thanks to ever-escalating power bills and an inability to reduce power usage.

The generator has been in use for around 18 months, giving publican Jeff Pohlner a chance to make comparisons with costs incurred when he was fully reliant on Ergon Energy to supply his power.

"My last power bill before I put the generator in was nearly $50,000 a year, a thousand dollars a week virtually," he said. "Initially I was looking at putting in a back-up generator for when we get blackouts."

The generator runs from 7am to 9pm from Monday to Friday.

Mr Pohlner said Ergon Energy had not offered any solution when he first approached them about his power bill but after the generator was installed, they came back to him with different tariff suggestions.

"I don't know what they gained out of it but they dropped me down to 17.6 cents/kWh at night (from 19.6c/kWh), and put me on what they call a shoulder rate over weekends, which is full night rate instead of the standard," he said. "So now I only have to run it Monday to Friday - it gives my generator another two years of life."

He said he'd gotten the impression that Ergon didn't believe he would make the change.

Mr Pohlner said he bought 2500 litres of diesel at a time, at about 10c/l below the bowser price, and claimed 41.5c back in duty when his BAS was submitted quarterly.

"If I had to pay full bowser rate for diesel it'd be the same price as electricity but the point is, I'm getting a third of my money back in rebate," he said.

I would say in the next 12 months we'll be able to maybe be a bit more profitable - Jeff Pohlner, Barcoo Hotel

"That generator should last 12 years - power's going to double over the next 10 years so the saving will be more."

As well as five coldrooms and two freezers, the machine supplies power to hotel rooms and a coffee shop.

The business pays 14 wages a week and Mr Pohlner said if he hadn't been able to cut his power bill he'd either have had to put his prices up or cut staff.

It gives the business the full standby power Mr Pohlner was originally looking for, in the event of blackouts.

"It just automatically cuts in, which paid off in the first month we put it in, because the town went out on a Friday night," he said.

"I got onto an expert at Griffith University about battery back-up - because we're three-phase power we need 415 volts," he said. "(The expert) said you'd need a lot of spare land and a spare quarter of a million too. And its life at best would be 7-8 years."

Ergon Energy's corporate communications advisor Brett Judge said no two customers were the same, and that what suited one may not meet the expectations of another.

"People who are in business have to make business decisions," he said. "We would always encourage business customers to contact us to discuss their needs." Yaraka Hotel patrons Chris and Gerry Gimblett are another of the small businesses struggling under the weight of electricity bills. Picture - Sally Cripps.

Further south, at Yaraka, the pub at the heart of the 18-person town is struggling with similar issues but its owners said they'd received no joy when they rang the retailer to see if better deals were available.

"We explained the hotel was an unavoidably high electricity user," Chris Gimblett said. "They rang back and said they couldn't do anything, that tariffs were set by the government."

He said that at the moment he and wife Gerry, faced with a $24,000 annual power bill and an $18,000 insurance premium, were working for Ergon Energy and the insurance company.

"Between the two, our profits are eaten up before we open the door," he said. "Somehow the price has to come down - it's an enormous blight on those of us with a small turnover."

Saying he too was looking at a diesel generator, he thought a petition may be the only way to convince the government of the seriousness of the situation.

"Thousands of signatures might make them take notice at last. Too many people are hurting."