Drought is something that wears you down but now a wearable art production acclaimed as of national standing has shown that you can find beauty even in despair.

Drought is something that wears you down but now a wearable art production acclaimed as of national standing has shown that you can find beauty even in despair.

The 33 garments in the Dress the Central West project sashayed down the catwalk to an audience of 300 at Blackall on Friday night, wowing all present with their creativity.

Undertaken by Red Ridge (Interior Queensland) in collaboration with the Central West Hospital and Health Service, the Blackall-Tambo Neighbourhood Centre, the Central West Aboriginal Corporation and an FRRR Tackling Tough Times Together grant, it teamed up with wearable art fashion designer Claudia Williams from Llani Creative to deliver the community-driven sensation.

As Red Ridge chairman Andrew Martin said, there is indeed beauty in a drought, if you know how to look for it.

"This project has gone way beyond just creating wearable art - it has brought our communities together, inspired creativeness, innovation and meshed together the vibrancy, uniqueness, resilience and available support mechanisms as a community collective to deal with the strains of the long impacting drought, that has burdened our local communities," he said. 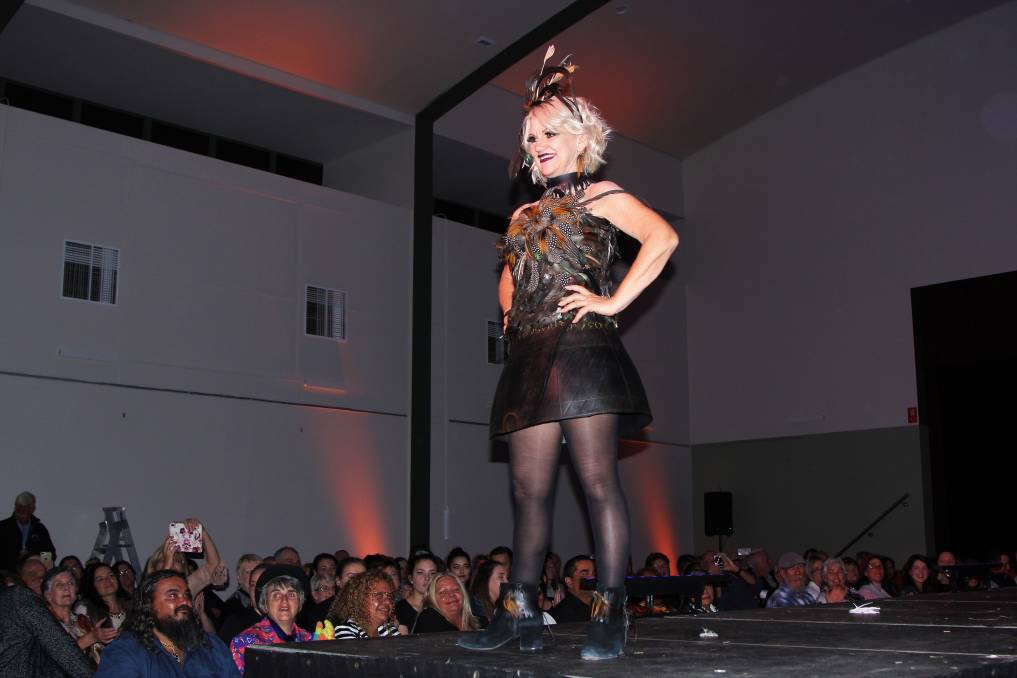 Red Ridge organisers wanted to help people find a way of helping people to reconnect with their communities, stories and culture after battling drought for six relentless years and offered workshops in Winton, Blackall, Longreach and Barcaldine in November last year.

"What we created in these workshops wasn't costumes," Ms Williams said. "They're definitely what you would consider couture fashion garments."

Blackall's Di Hauff stunned the audience with two show-stopping creations, one made from guinea fowl feathers and a tyre tube, and the other from onion bags and baling twine.

"When I first saw the workshops advertised, I thought what the heck I might just go along and give it a go, not really being a self-confessed creative person or understanding the concept of the whole project," she said.

I just needed an out from the daily grind of living through the drought, the monotonous load of caring for our property's stock and my family

"I just fell in love with the project, amazed at what 'us' as a community were creating, and just wanted to keep coming along."

Cultural leaders Two Sisters Talking, Joyce Crombie (Anpanuwa) and Jean Barr-Crombie (Aulpunda) created a garment about Walking on Country that was inspired by the Simpson Desert area where they both grew up while another, Changing Seasons showed the story behind the dramatic transformations between droughts and floods.

Mental health and community support were integrated into the workshops, with Cameron Dare from Queensland Health's Tackling Regional Diversity through Integrated Care Program delivering many audience-tailored talks across the west.

Many now wish to see more fashion projects hosted by Red Ridge in the future.

Mr Martin said on Friday night that even before it opened it was creating national and international interest.

Longreach region residents have a chance to view the show on Saturday night, June 1.