In both drizzly rain and bright sunshine, large crowds have turned out across the state to mark Anzac Day, with regional Queenslanders coming together to pay their respects.

In both drizzly rain and bright sunshine, large crowds have turned out across the state to mark Anzac Day, with regional Queenslanders coming together to pay their respects.

In Nanango, a dawn service was followed by a morning march and second service, with people lining the streets.

Among those marching were the Nanango RSL Citizens Auxiliary, dressed in World War I style nurses' uniforms, a tradition started several years ago.

Able Seaman Christine Merrilees from the HMAS Albatross, Nowra, travelled to Nanango to ensure a Navy presence in the service.

Ms Merrilees' father and grandfather both served in the Royal Australian Navy and her son is also a serving member. 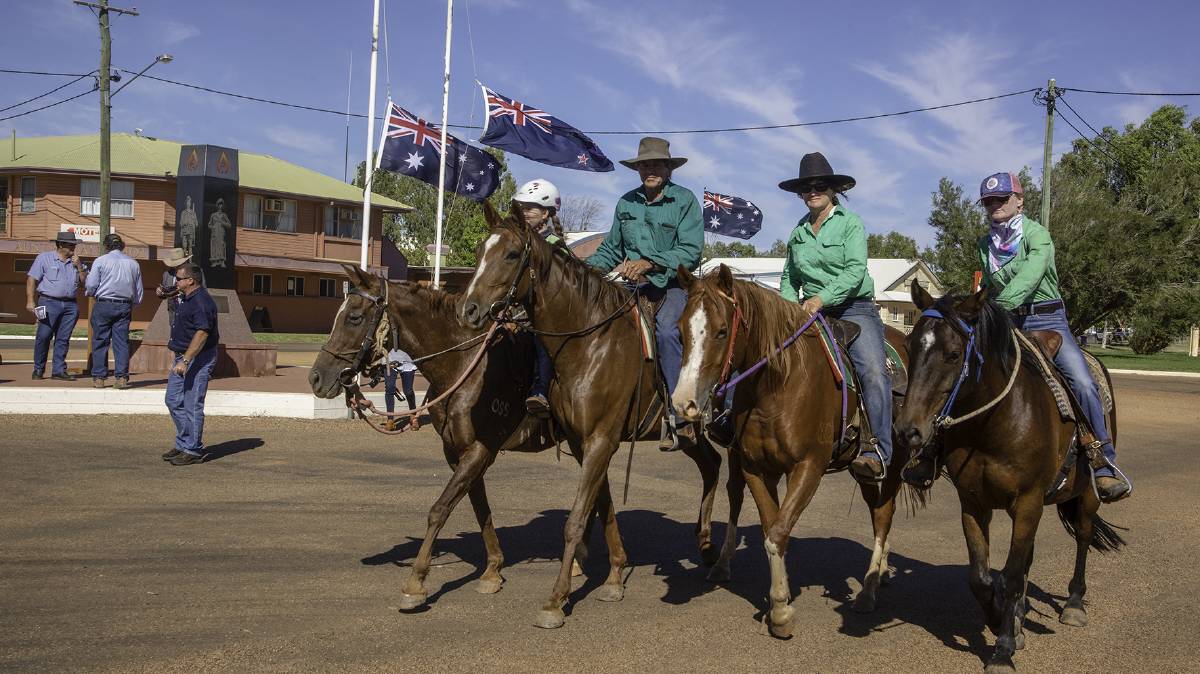 "My family are here so I try to come every two or three years," she said.

Agriculture minister and Maranoa MP David Littleproud paid tribute to serving Australian Defence Force members at the service, recounting a trip he made 18 months ago to spend 10 days in the Middle East with Australian soldiers.

"The pride and passion our diggers showed to me is something I'll never forget," he said.

One of the special guests at the Longreach Anzac Day commemorations was State Recovery Coordinator Major-General (Retd) Stuart Smith.

"In my capacity as the State Recovery Coordinator for the monsoon floods it's important for me to demonstrate full support for all community events, particularly those communities that were hard hit by the floods," he said.

"I thought the service was very professionally run. I always enjoy seeing the young people in the community getting involved in the service and that was a highlight today."

Thousands of residents turned out to pay their respects in the garrison city of Townsville, the home of Australia's largest Army base, Lavarack Barracks.

Prime Minister Scott Morrison attended the traditional Dawn Service on The Strand before watching the parade.

The feeling of gratitude for our diggers was compounded this year, with soldiers credited for saving lives during the height of the February flood and helping to rebuild Townsville in the aftermath.

About 500 people gathered to watch the sunrise over Cleveland Bay in the rural community of Rollingstone, 50km north of Townsville.

This was followed by a parade and community morning service.

Rollingstone RSL President Ewan Cameron said the morning service was all about community involvement and passing on the Anzac Day legacy, with many local school children involved.

Key note speaker Lieutenant Christian Tsiamis gave thanks to the Anzacs and said their ethos lived on in today's military men and women.

"Over 100 years after the first World War, we can't appreciate first hand the relief but also grief our ancestors felt, but we can still take pride in the contribution our Defence Force continues to make on the world stage today," Lt Tsiamis said.

ROCKHAMPTON residents did not forget to pay due respects to past and present veterans in a string of moving Anzac Day ceremonies on April 25.

From inland locations such as Springsure and Bouldercombe to the waterfront at Emu Park and Yeppoon and all places between, young and old defied the drizzle to commemorate a spirit born 104 yeas ago.

In Rockhampton a long parade of veterans, their families, serving ADF personnel, school students and volunteers snaked their down Archer St towards the river, then turned back to East Street before stopping at Rod Laver Plaza in Quay street.

Aircraftwoman Alexandra Irving, 33Sqn Avionics Technician RAAF Amberley, delivered the Anzac Day address, saying it particularly pleasing to do so in her hometown.

A unique #AnzacDay tradition taking place in #Warwick - the "Fade Away Parade" where the #Diggers symbolically hand over to the younger generation - very moving to watch #AnzacDay2019pic.twitter.com/E4bxl0JKxL

In the southern Queensland town renowned for its pipes and drums band and Scottish echoes, there was a very international flavour to the Anzac Day commemorations at Warwick this year.

Thanks to the polocrosse World Cup competition that's underway at nearby Morgan Park, the crowd of around 3000 was boosted by interstate and international visitors.

All World Cup teams attended the morning service at Leslie Park, with the New Zealanders able to boost the singing of their national anthem in the process.

He told the crowd of some 3000 that the original Anzacs hadn't set out to be immortalised but their courage, selflessness and loyalty had come to symbolise the best of Australia and New Zealand.