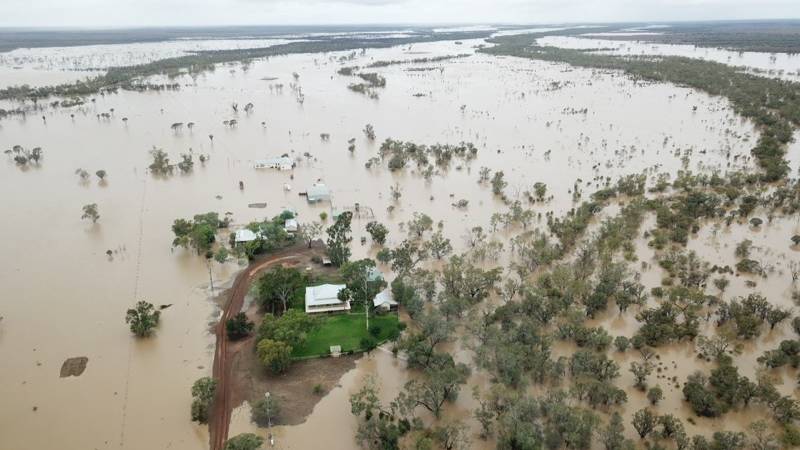 An aerial view of Hope and Ravensbourne Creeks converging around the Athol Station homestead west of Blackall on Thursday. Pictures - James Moller.

Champagne corks have been popping across the central west and in the central highlands this week as the much-promised rain depression lived up to expectations.

Champagne corks have been popping across the central west and into the central highlands this week as the much-promised rain depression lived up to expectations and started filling in some of the deep cracks in a landscape parched for water.

Rainfall totals in the vicinity of 150-250mm were widely reported around the Longreach, Isisford, Blackall, Adavale and Tambo districts by the end of Wednesday, and the township of Blackall, with a three-day total of 187mm, had its biggest continuous fall for nearly nine years.

"That's saying something about what we didn't get previously," said Blackall-Tambo mayor Andrew Martin.

His property at Tambo received 148mm and he said it could be the start of a major resurgence of pasture growth after years of continuous drought.

"It's a little late in the growing season but late's better than never," he said.

"I think because it's been so widespread across Queensland it will stop the (cattle) market decline.

"People will be able to restock, and to source agistment - those who have missed out.

"Businesses up and down the street here will be rejoicing. It's not going to happen overnight but it's headed the right way.

"It's a long time coming but it's as good as you can get."

Two of those with as much water as they can handle at the moment are David and Kate Moller at Athol Station, west of Blackall. 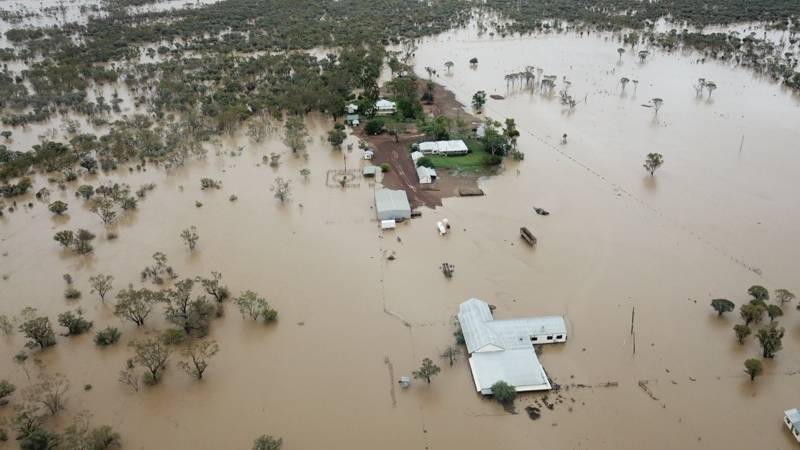 Another view of the flooding at Athol Station on Thursday. More water is expected from upstream over the coming day.

Thanks to falls of 250mm and more upstream towards Adavale, Ravensbourne and Hope Creeks began rising this morning and were surrounding the homestead on Thursday evening.

David said water levels had been one metre over the Blackall-Isisford Road for most of the day, spreading around two kilometres across the floodplain.

While watching for the levels to peak, he said the previous owners had reassured him about what he could expect.

"There was 25mm here in the last 11 months so we've been a long time with nothing," he said.

They recorded 186mm at Athol but a lot less, 67mm, at Garfield at Jericho.

He felt that amount would still do a lot of good, as it was still showering on Thursday.

"It means grass security," he said.

"It's been years since you could say you've got three or four months of grass in front of you.

"It will need follow-up but with a full moisture profile, it should only need a top-up."

He planned to begin mustering at Jericho to sort up cattle to bring to Blackall once the black soil dried out enough.

A "friendly flood" is how one #Blackall local described the run in the #Barcoo River today. The water was lapping the bridge at 10am and by 4.30pm was .39m over the bridge and rising @qclnews#BirdsEyeViewpic.twitter.com/z884UZ1vDe

The effects of ex-tropical cyclone Trevor began to be felt in the central highlands on Wednesday and similar rejoicing was taking place in the Hughes household when Banchory, west of Clermont, recorded 218mm.

"Eight inches of rain will really change the outlook there," Philip Hughes said.

"I think you could say it's drought-breaking, if the cloud hangs around.

"If we can keep the soil moist it will do great things, and it should warm back up to grow grass.

"It's not a bad time to get rain, at the end of March - heat shouldn't burn the feed off now."

He said falls of that amount had been reasonably general in the Mistake Creek valley.

They had measured 13mm at Dulacca Downs but it came on top of 50mm over two-thirds of the property 10 days ago, and Philip was confident of more rain from the next trough forecast to come through on the weekend.

"We are still short of water here though - that's a common story around here at the moment."

Water levels in Fairbairn Dam, critically low at 11.6 per cent a fortnight ago, were only 1pc higher by Thursday afternoon but a Sunwater spokeswoman said any inflows would take a while to reach the dam.

"It's such a big dam, Queensland's second biggest, that even a few per cent means a few thousand megalitres of water," she said.