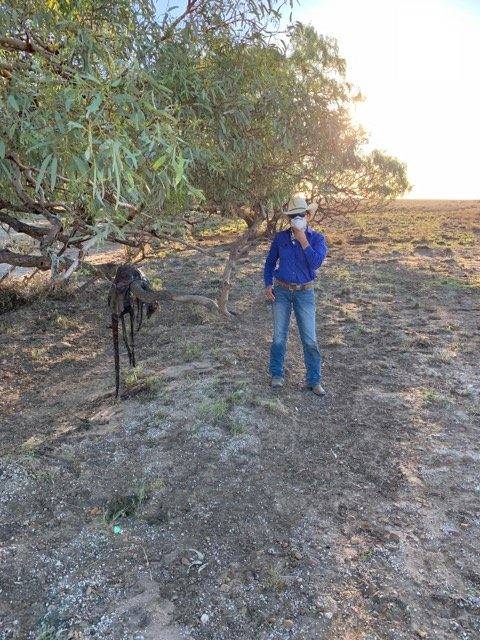 A dead kangaroo hangs off a tree at Emma Forster's Werna Station property.

As producers bury dead stock and deal with the immediate trauma of the devastating Queensland floods, a much longer battle looms in the distance.

Emma Forster, a beef producer from Werna Station near Winton, said disposing of dead stock would have a huge mental toll on producers.

“Cleaning up the dead will have a huge impact on graziers’ mental health,” she said.

“We will never forget what has happened or what we have seen.”

Ms Forster said in the immediate aftermath of the floods she had been focusing on all the urgent tasks that needed doing around the property.

“We are trying to be positive and really need to put our front foot forward and get back in the game,” she said.

“The roads are damaged badly but we need them opened up as soon as possible.”

She said she was worried about the impact of the disaster on her children, aged 16 and 20, although she was relieved they were not at home to see it first hand.

“If we don’t pick ourselves up and move on we may as well walk off our properties. It’s all bets off at the moment as far as keeping stock alive and checking on your neighbors.

“Everyone is helping everyone.”

Outback Futures chief executive Selena Gomersall, a registered psychologist, has spent the past couple of days working with the flood-stricken Winton community.

Beef producer Emma Forster says the scars from the floods will linger long after the waters recede.

“At the moment people are in the busy throes of a crisis," she said.

"It's a traumatic phase but it's in some ways easier than what is to come."

The mental impact of the floods, especially on younger children, could linger for years, Ms Gomersall said.

"It has an enormous impact on children.

"Some of these kids have never seen rain and they have been told it's a good thing, and the first rain they've seen comes and takes everything away."

Ms Gomersall and a team of counsellors and psychologists would be back in Winton the week after next to conduct more clinics and telehealth sessions.

"We're keen to really educate the community that this isn't a short term scenario. It's like having internal injuries.

"Our role with other service providers is to help people understand that they might feel the effects for years to come, and that's normal."

Primary Health Networks across Queensland have formed an alliance with the Royal Flying Doctors’ Service to support the flood-ravaged communities in western and north western Queensland.

The alliance has been meeting daily to coordinate resources and plan its response.

"Like these relentless floodwaters that have smashed Townsville and have now swallowed up land, livestock and livelihoods out west, we know that mental distress is just as indiscriminate in who it knocks down,” he said.

“Our job is to pick people back up in a hurry and keep them upright, with the message that you’re not alone and we have teams of support services ready to deliver the right care, customised to your needs."