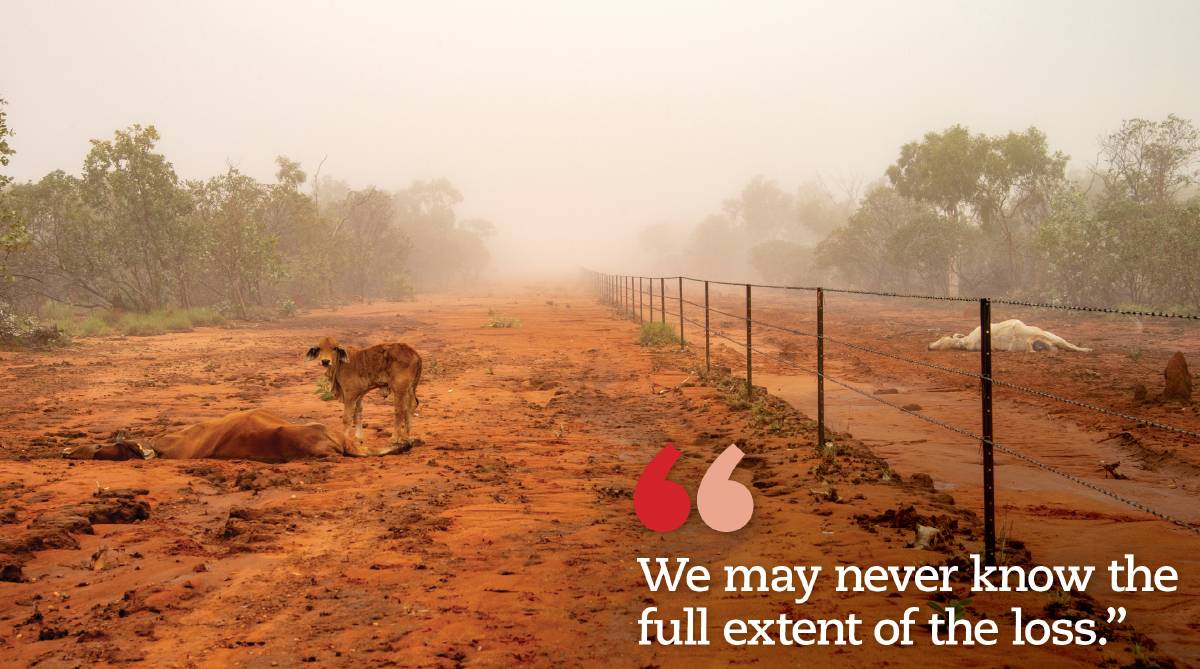 Devastation: Jacqueline Curley, Gipsy Plains, Cloncurry took this photo of an orphaned calf beside its mother.

The worst agricultural disaster in Australian history is unfolding in north west Queensland, with the impact to be felt for years to come.

An area the size of Victoria has been inundated in north west Queensland with the unprecedented flood unfolding as the worst agricultural disaster in Australian history.

Hundreds of thousands of cattle have been lost to the flood, with animals weakened by years of crippling drought unable to move to higher ground or killed by exposure.

At first, the rain was viewed as a blessing for graziers in the dry open plains around Cloncurry, Julia Creek and Richmond, which had been in the grips of drought for seven long years.

But as the heavens continued to open, dumping more that a year’s worth of pre-drought annual rain in just a few days, the situation quickly became dire.

The Flinders and Leichhardt Rivers and their tributaries swelled to create a vast inland sea, sweeping away livestock, infrastructure and livelihoods.

Cattle Council of Australia CEO Margo Andrae said it could take months before the true magnitude of the disaster was known.

“The affected area is equivalent in size to Victoria,” Ms Andrae said.

“One producer got 850mm in five days; you just cannot prepare for that inundation. 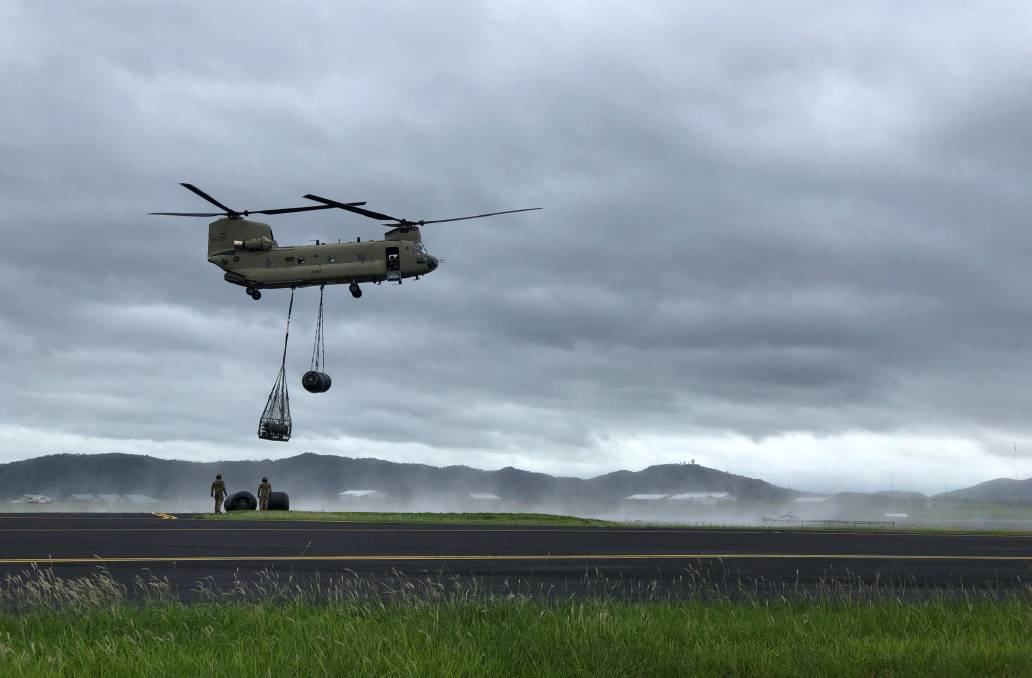 The Australian Defence Force has 150 personnel delivering fuel and fodder out west.

Ms Andrae said at least a couple of million head of cattle were in the region, a fair proportion of Queensland’s entire herd, which numbered 10 million in 2016.

“A disaster of this nature means pre-planning was very difficult; producers had been focused on good animal welfare management for drought.

“We do know drought is broken by rain, but no one could have predicted that much water in this amount of time.”

Ms Andrae said some producers had lost everything, including their revenue and livelihoods for years to come.

It is feared that some may never recover.

AgForce Queensland president Georgie Somerset said as of Monday afternoon, they had received requests for fodder drops in 154 locations to feed almost 120,000 head.

She said mass losses were expected to both livestock and infrastructure.

“The enormity of this I don’t think we’ve seen, in terms of the scale and length of time this sat over the region that has been impacted, and continues to be impacted,” Ms Somerset said.

She said it would take years to rebuild from the disaster and AgForce would be working with residents and affected communities. 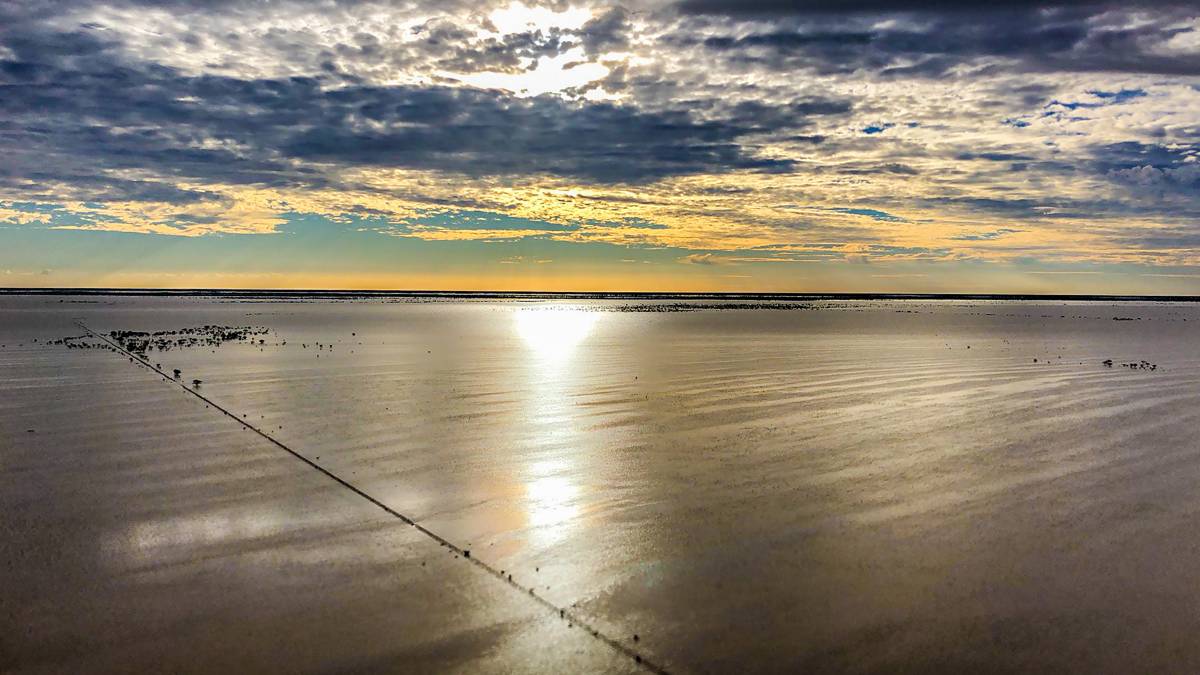 The north west is an inland sea.

“We need to work collaboratively across the industry for the next two to five years, doing our best to pick up and get on with it.

“For AgForce it is how do we ensure support going forward to rebuild a really strong industry in the north west in terms of infrastructure, restocking.”

Elders Queensland sales manager Michael Spencer said the scale of the disaster should not be underestimated.

“This is a very significant event, probably the most significant flooding event or natural disaster that Australian agriculture has ever seen,” Mr Spencer said.

“It will take some time for the full extend of that to be realised, along with time for recovery plans to be worked out and longer for recovery to occur.

“The flow-on will be several years to rebuild infrastructure, stock numbers and herds and genetics.

“The number of cattle spoken of will have a significant impact on Australia’s herd size.

”The urgency at this time is for the fodder to be delivered to the remaining livestock, which will remain a priority for a while.”

“It is going to have a massive impact on so many levels and it is very hard to calculate exactly what it means at this point,” Mr Hughes said.

”The level of grief and sadness that is being portrayed is being matched by the level of gratitude and compassion coming from the Australian public.

“The story needs to be told of how it is, that this was a freak of nature.”

Northern-based LNP Senate candidate Susan McDonald, whose family has a long history of running cattle in the north west, described the situation as a perfect storm.

“This is an event of unprecedented magnitude, not only the water necessarily, but the combination of flood, drought and that terrible cold just created the perfect storm,” she said.

“There have been people who have been feeding stock right up until the rain to get them through the drought who have now lost most or all of those animals and that's just devastating.

“The challenge for the rest of the country is to understand that first, it’s not over and floodwaters are still moving through the Gulf and the waters are still peaking in the Far North.

“When people are asking about the losses, we may not know that for months as people go about and muster, and then of course some stock will have just washed away and won’t be recovered.”

Ms McDonald’s family-owned property, Iffley Station, south of Normanton, has also been affected and despite having experienced cattlemen managing the property, she knows there will be losses.

She said the lost livestock was only part of the cost to the beef industry in the region.

“It is important not to just cost this flood at the value of the stock lost, the multiplier is the value the industry gives to the nation.

“The downstream effects include jobs, not only in the regions but also in the cities and the export dollars it brings to this country.

“The ongoing impact will be profound.”