Farmers are fed up with a legal system they say enables extreme animal activist to harass and intimidate legitimate businesses with online campaigns aimed at shutting down all animal industries.

Now, this publication is launching a campaign to #protectourfarms and force government to grant stronger protections from extreme activists in the wake of the social media storm around the release of farmers’ personal details on the anti-farming website, Aussie Farms.

Our campaign is calling on the government to revoke the charity status of Aussie Farms, strengthen farmers’ privacy protections and increase penalties for trespass.

Controversy flared this week when Aussie Farms published an online map of farm and processing locations across Australia, marked with emotive symbols including bloodied axes.

Farmers say the website, which collates information submitted by members, is riddled with inaccuracies.

The Aussie Farms Facebook page hosts on an online community which posts videos of trespassing by activist who state that they aim to either free animals, disrupt production or disseminate footage of legal practices which they say are immoral.

Aussie Farms executive director Chris Delforce told the ABC the map was created to “force transparency on an industry that's dependent on secrecy”.

He conceded some information may be incorrect and also said he would remove farmers contact details if they objected to it being published, but said photos and information about production facilities would remain. 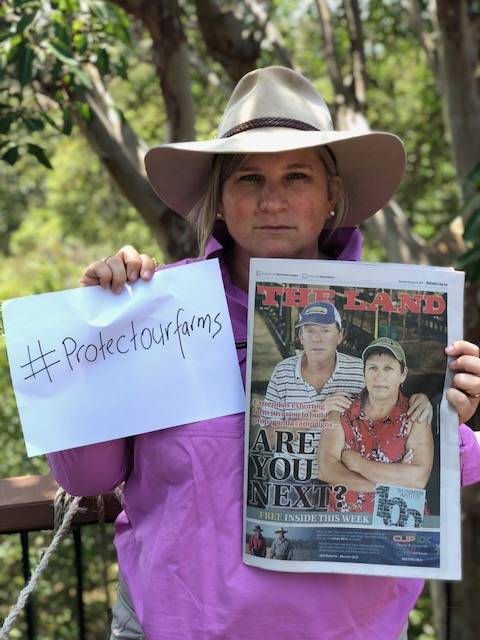 Aussie Farms’ registered users are encouraged to upload information about farming practices and images of livestock and production. Its volunteer registration form asks if members are willing to break the law in activist activities.

However, a legal expert said new laws that enable individuals to sue for significant breaches of their privacy could be a better solution than tougher trespass laws - which often requires police to agree to investigate alleged offences.

Tougher privacy laws could be a new deterrent to animal activists who trespass on private property to access farm animals, particularly in the many instances where the family home is located nearby.

David Vaile, lead of privacy and and data surveillance at the Allens Hub for Technology Law and Innovation at the University of NSW, said government had squibbed reforms needed for tougher privacy laws for more than two decades.

Nothing to hide hear. Entering uninvited and taking things that are not yours is an indictable offence and serious bio security risk pic.twitter.com/BoKo5u1IB1

Mr Vaile said individuals and companies can sue for a significant breach of their privacy in most developed democracies like New Zealand, the UK, USA, South Korea Singapore and Japan, while the regulator in Australia is a “toothless tiger”.

“Everywhere else in the world has worked out way of protecting individuals while maintaining free speech, public interest journalism and so on,”  he said.

“It’s been a weeping sore in Australia  because major political parties haven't wanted to touch it.

“Both major parties have had the chance and wimped out in past decades. There’s been over five reviews of privacy laws by the Australian Law Reform Commission, which all recommended more protections

“Basically is could be passed tomorrow given the huge amount of work that’s been done.”

Australian Pork Ltd represents the livestock producers who have been targeted the longest by animal activists. Animal activists trespassing on farms can cause biosecurity breaches that harm and kill animals.

The organisation’s chief executive Andrew Spencer said while some of the detail on the Aussie Farms map was publicly available, the general public should be aware of its overarching purpose.

“You can argue the details about the legality of the map, but what outrages us is the intent behind it,” Mr Spencer said.

“It’s a tool for their followers to break the law and trespass.

“They are extreme vegan ideologues who have an objection to interactions between humans and animals.

“Farmers live where they work in many cases, and it’s the same for piggeries. When someone breaks in they’re in your private space and you feel completely violated.

“It’s like being asleep in your house and having a light shone on you. It’s incredible people think they have the right to do that.”

The story Join our campaign and protect our farmers first appeared on Farm Online.