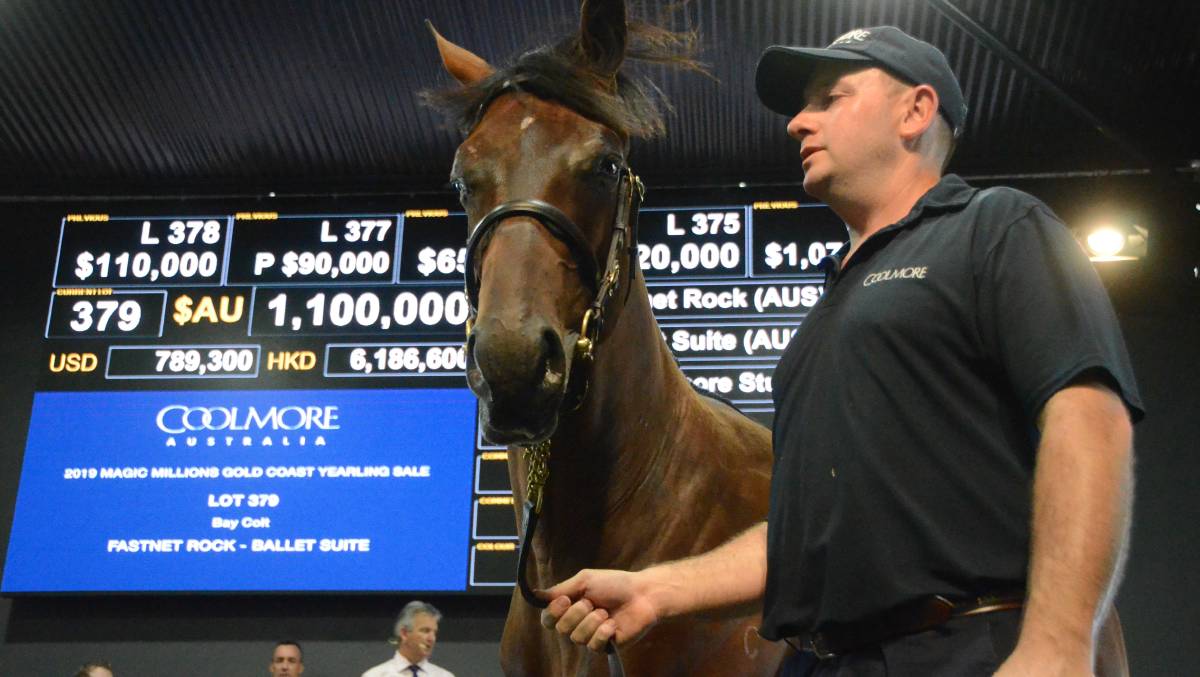 It did not take long for the first $1 million youngster to be sold at this week’s Magic Millions Yearling Sale.

IT did not take long for the first $1 million youngster to be sold at this week’s Magic Millions Yearling Sale at the Gold Coast, when lot 10 walked out of the sale ring as the first horse to fetch the “magical” seven figure price for its 2019 auction renewal.

In fact three of the four $1m horses to sell on day one of the four session sale were inside the first 72 lots, and which included the sale’s top price at $1.6m after the conclusion of day two (yesterday, Thursday). This colt - by champion Australian sire Redoute’s Choice from Purely Spectacular, was sold via Bhima Thoroughbreds, Scone, and went to rising international industry participants Phoenix Investments and the Chinese connected Aquis Farm.

Magic Millions managing director Barry Bowditch is delighted with how the sale has been progressing.

“It was another strong day’s selling (after yesterday, day two Thursday), and there were plenty of buyers getting on the board, it is a great spread of buyers,” Barry said.

Nine yearlings have sold for $1m or more during the first two days of selling.

Second top to date is $1.4m which went to Segenhoe Stud’s Redoute’s Choice – Breakfast In Bed colt, and which sold to Sydney based bloodstock agent James Harron.

Thursday also saw two youngsters which fetched $1.1m each – a Fastnet Rock colt (from Ballet Suite) from Coolmore Stud, and an I Am Invincible colt (from Champagne Cath) selling from Newgate Farm, Aberdeen.

A home-based stallion for the Mitchell family at Yarraman Park, Scone, I Am Invincible continues to boost his strength on the racetrack as well as to those who are fortunate to be now selling his progeny. Yarraman sold two of his yearlings during the first day, one a colt for $1.3m (from Tai Tai Tess) the second top of day one, and a $1m filly (from Rose Of Choice) which sold to Yulong Investments.

Backed by Chinese businessman Zhang Yuesheng, Yulong is not only continuing to build on its racing and Australian broodmare collection, but is also participating this year as a seller with the group’s first ever Magic Millions entry a filly by More Than Ready selling for $400,000 to Hawkes Racing. The Victorian based Yulong (at Mangalore just north of Seymour), have listed 10 selling at the Magic Millions.

The sale continues today (Friday) with book one concluding on Saturday night after the Magic Millions raceday at the Gold Coast.