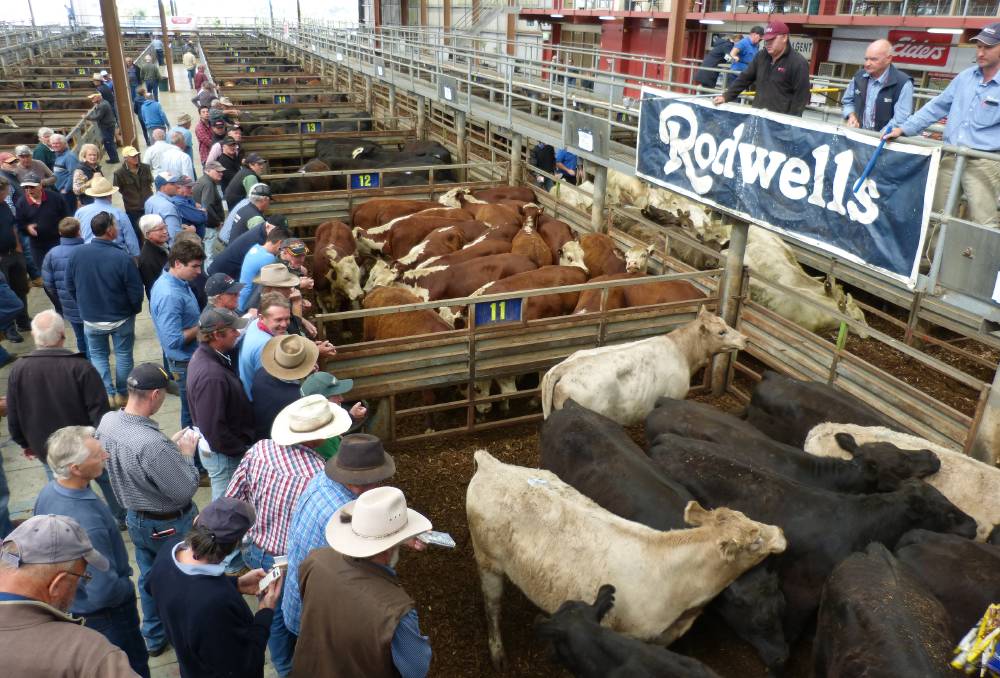 The action at Pakenham, Victoria, this week where producers, mostly from West and South Gippsland, feedlot buyers and a small number of processors aided strong competition.

GOOD value young cattle buying combined with the prospect of the market lifting hard and fast once rain arrives is ramping up activity on the trading front.

With the price of younger cattle on a cents per kilogram basis on par with heavy cattle, a rare situation driven by both drought and strong demand at the finished end, cattle traders are reaping as profit all they make in weight gain.

Agents are reporting the situation has meant there are even some new faces on the trading scene, as breeders use the opportunity to edge back into rebuilding numbers or those lucky enough to be under rain look to take advantage of feed.

Analysts say the good feeder and finished cattle prices are unlikely to falter, given continually-growing overseas demand for the end product and pending further supply shrinkage.

That means the relatively strong trading margins are here to stay well into next year.

“In a normal year with average pastoral conditions, there is far more exposure to trading but blind Freddy could tell you a decent break now will push prices right up,” he said.

“And that break is only a question of when.

“It is safe to say 2019 will see above-average cattle prices, and in particular higher than 2018.”

Mr FitzGerald said the few fronts that had swept through had been patchy but had left some with the luxury of a larger bank of reliable feed and they were the ones in the best position to consider stepping up their trading.

“Given the way the market is likely to go from here, it would be safe to assume there will be a larger group of traders looking for opportunities where they think they can buy at value,” he said.

“We’re advising clients to zoom out - it’s clear cattle prices are well above five, 10 even 20 year averages so while there have been ups and downs this year, that is a reason to be more bullish about taking on some greater exposure to the restocker and trading environment.”

The prospect of a wetter December, and even next week’s rainfall forecast eastern NSW and Victoria, is likely to further fuel the willingness to take a punt on being able to carry cattle until a widespread break arrives and shifts the market into overdrive.

Mecardo analyst Angus Brown said while store prices had lifted, weaners in many parts of the country were still very good value compared to where you’d sell at as feeders.

Those who bought cattle back in September were sitting pretty at the moment, with prices having gained ground if cattle were to be sold now, he said.

Where grass is available however, there is even more to made made growing them out.

Mr Brown pointed out supplementary feed was still expensive, and it would be costly to put weight on cattle outside of grass systems.

Victorian farm business consultant Graham Lean said the trend towards increased cattle trading in his state was wider than just the current set of circumstances.

It was fuelled partly because the feedlot sector keeps growing and also because from a farmer’s point of view it offers stocking rate flexibility and allows for capitalising on extra feed without big additional commitment, such as labour, he said.

Southern producers fortunate to have a reasonable season, from areas such as south eastern South Australia, western Victoria, the west and south Gippsland and Tasmania, took the opportunity to purchase young cattle from drought-affected areas of NSW over winter and would be looking to sell them from now, Dr Lean, Agrivet, said.

“They picked up weaners around the 250 to 275 cents per kilogram mark, some even back towards 200, and have been able to put good weight on them so it has proven a very profitable venture,” Dr Lean said.

Northern Tablelands, NSW, agent Shad Bailey, Colin Say and Co at Glen Innes, said cattle around the 300kg mark were selling at a similar rate to heavier cattle, while lighter and plainer cattler were as much as 20 to 30c cheaper.

“It’s very unusual to be able to buy lighter cattle for less than you can sell (in c/kg terms) at the other end,” he said.

“It’s largely because feedlotters have had to come lighter to secure cattle - so export feedlotters are competing against trade weights.

“But also the bit of grass around has backgrounders active.

“Anyone who did take the gamble and bought cattle for under $2kg are now sitting on stock worth north of $3.”

One aspect to consider about the current trading dynamics, however, was the big number of calves sold early, which would mean tighter supply during next year’s weaner selling, and therefore more upward pressure on prices, he said.

And while there was definitely more activity on the lighter cattle, even those with some feed in NSW were still very nervous about seasonal conditions.

“The thing to weigh up is that if it does stay dry and hot cattle go backwards quickly, so it’s not without risk,” he said.

“We are really only talking about one segment of the market - under conditioned, light cattle - where there is perceived value.”