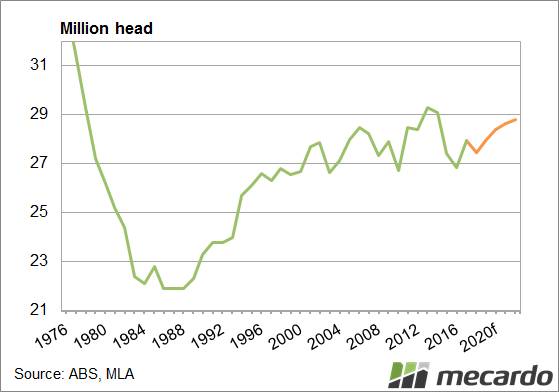 FIGURE 3: Australian cattle herd. MLA’s forecasts for 2019 and beyond are based on normal seasons. After the liquidation, there will obviously be a return to herd rebuilding when conditions allow. In good years, like 2011, 2013 or even recently in 2017, the herd can grow much more quickly than the rates projected.

Mecardo's Angus Brown says the herd rebuild is on hold but the outlook is strong for prices in 2019 and 2020.

Meat and Livestock Australia (MLA) have released their October update and left unchanged the 7.8 million head mark in slaughter estimates.

The updated estimates of herd, slaughter, beef production and exports are basically trying to put some figures around how the drought is going to impact supply down the track.

There were some slight changes to slaughter projections for 2019 to 2022.

MLA is expecting tighter supplies for the next two years, before getting back to 7.8 million head in 2021.

To assess the impact of the drought, we can compare MLA’s January and October projections.

The January forecast was for slaughter of 7.4 million head, so this number has increased 400,000 head or 5pc added.

In January MLA was forecasting average cattle carcase weights at 293kg cwt, but this has now fallen to 290.2kgs per head.

The fact that so many cattle are going through feedlots means that despite the increase in female slaughter, carcase weights are still at their second highest level on record.

What does it mean?

It’s interesting to see that the forecast is not taking the herd back to the levels of 2016.

There is, however, the possibility that with the very ordinary season and good prices, we could return to levels under 27 million head.

Whatever the final herd numbers, MLA’s projections paint a rosy picture for prices for 2019 and 2020 at least. Lower slaughter and a herd rebuild will see cattle prices improve relative to export values, and export prices are expected to remain robust.

This all suggests the lows of 2018 might be the weakest prices we see for a few years. This is of course dependent on a return to somewhere near normal rainfall.

The story 2018 cattle prices might be ‘weakest we see for years’ first appeared on Farm Online.