The entire cropping zones of Queensland and NSW together have contributed just 67,800 tonnes into GrainCorp storages for the year. 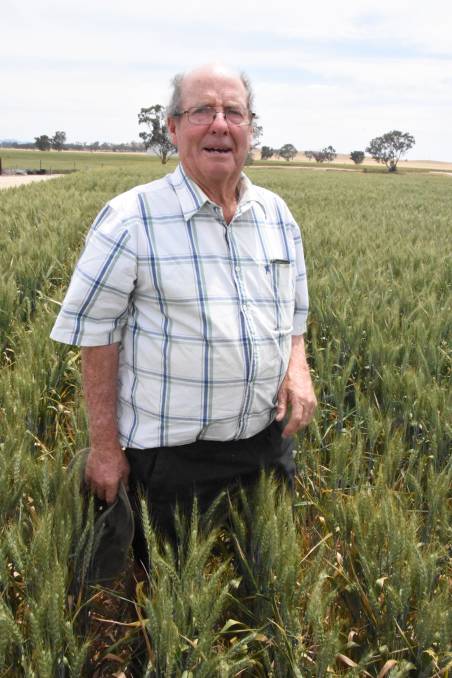 Avoca district farmer John Field in a paddock of Trojan wheat sown by son Chris into vetch hay stubble. Mr Field said the extra moisture had allowed the crop to fill well. "It looks like it should have reasonable potential," he said.

HORROR receival figures into the GrainCorp storage network highlight the depth of the drought in Australia’s north-eastern cropping zone.

Total new-crop grain receivals into the GrainCorp bulk handling network as of November 5 totaled just 93,300 tonnes, with Victorian deliveries, traditionally not a major factor until December, making up over a quarter of the tally.

And industry figures expect the sparse level of deliveries to continue, estimating that GrainCorp could expect to see just 30 per cent of the well below average  east coast winter crop in its system given the strong domestic market this season.

The entire cropping zones of Queensland and NSW together have contributed just 67,800 tonnes into GrainCorp storages for the year.

Even this lowly total is a step up from last week’s figures, when there was just 22,000 tonnes across the two massive grain producing states, which normally put millions of tonnes into the system before the Victorian harvest is ripe.

In comparison, at this time last year, even allowing for a drought impacted season, there was 717,000 delivered to GrainCorp’s networks and in 2016, in spite of massive rain delays, there had been 1.2 million tonnes delivered.

The shortage of cereals hitting the system is borne out by the fact a significant proportion of the grain hitting the GrainCorp system has been chickpeas from central Queensland.

GrainCorp is bracing itself for limited deliveries of whatever grain there is this season.

In its harvest updates the company is emphasizing that given the drought conditions the majority of grain harvested will remain on-farm or be delivered direct to domestic customers.

Adam Robinson, Robinson Grain, agreed with this, saying farmers were looking to fill up their own storages up first.

“Grain coming off is either going into on-farm storage or there is a lot being sold directly off the header given where prices are,” Mr Robinson said.

“I’d expect that trend to continue, there will be some guys without their own storage that will deliver into the bulk system but it’s not going to be the first option.”

“It’s hard to see GrainCorp getting any more than 30pc of the grain around given many of their sites are export focused and that is not the name of the game this year.”

This is borne out in the receivals with the company processing more grain on the import side than the receival side.

As of November 5, GrainCorp has processed 167,000 tonnes of intra-continental shipments at its ports, deliveries from Western Australia and South Australia destined for the upcountry domestic market on the east coast, primarily in the Brisbane port zone.

The situation is expected to improve marginally once full harvest begins in Victoria and higher rainfall parts of the Riverina, where there are patches of reasonable crop, however even in the south yield projections are well down.

This year, he said there were some crops with good prospects but others that had struggled due to a lack of moisture and frosts.

“One paddock, planted by my son Chris, on vetch stubble from last year, where we could store a bit of moisture after cutting hay has got Trojan wheat on it and it has excellent yield potential, but others are not quite so good,” Mr Field said.

“There are a few paddocks that are not too bad and given where the prices are it will not be too bad, but it is not going to be enough to make up for the shortages in the north, that’s for sure.”

He said just 20km to the north crops had markedly lower yield potential.

“It has been a very sharp cut-off line in terms of where has got the rain and where hasn’t this year.”

“There is grain out there, and in some cases the relatively mild spring has meant the crop which has come off so far, mainly barley, has in some cases been a little better than expected but it varies immensely, right down to a paddock to paddock level.

Meanwhile the tough season has seen GrainCorp take steps to rein in expenses, confirming it will lay off around 50 people, primarily from its Sydney head office.

The positions are primarily in management and are unlikely to impact on the company’s dealings with grower customers.

The job cuts come as a result of a restructure that will streamline the company’s supply chain operations.

Elsewhere, receivals are starting to pick up.

In South Australia, Viterra received over 200,000 tonnes into its network last week to take total receivals to over 250,000 tonnes.

Although there are parts of the state that have endured a tough season, other parts are tracking towards average or slightly above yields.

The majority of the deliveries have come in Viterra’s central zone, especially in the Upper Mid North, centred on sites such as Bowmans and Port Pirie.

The upper Yorke Peninsula is also starting to gear up towards full harvest as well.

Barley makes up the majority of the grain in the Viterra system for now with wheat not quite ripe yet in most areas.