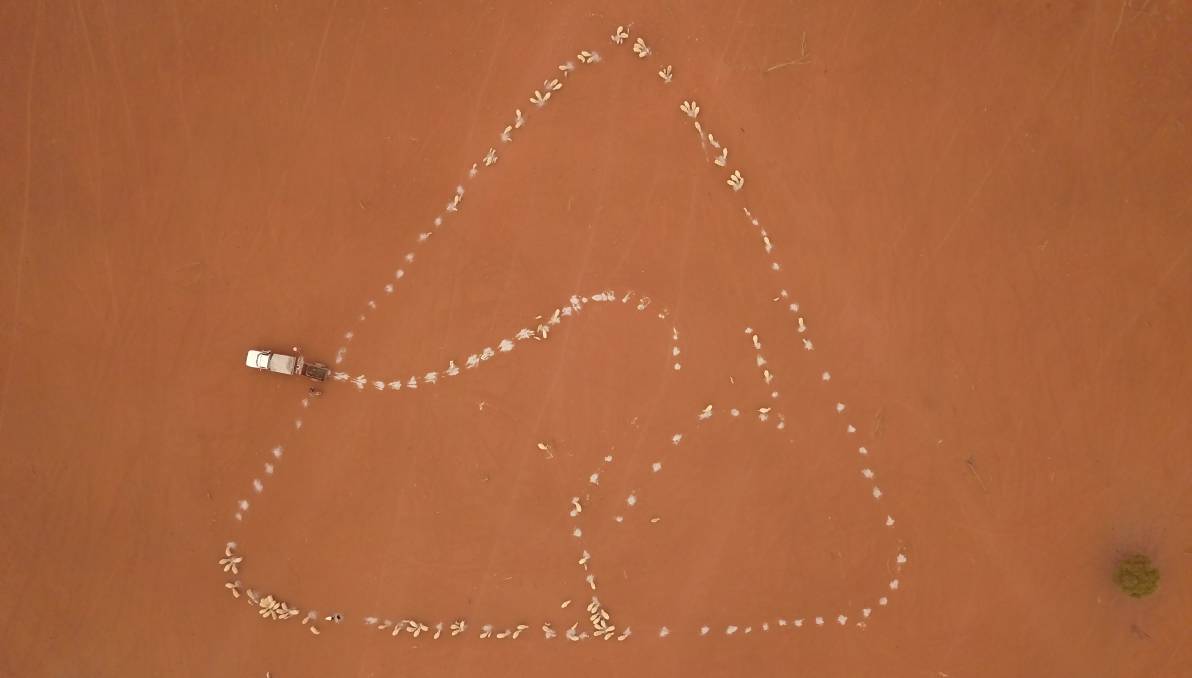 A western Queensland grazing family pushing mulga and battling ongoing drought has made a visual plea to politicians and the public alike ahead of today’s drought summit in Canberra, using drought fodder to create the picture.

A western Queensland grazing family pushing mulga and battling ongoing drought has made a visual plea to politicians and the public alike ahead of today’s drought summit in Canberra, using drought fodder to create the picture.

Wendy Sheehan, who lives at Trinidad, Quilpie, together with daughter Jennifer and governess Claire Jackson, created an image in the shape of the Australian Made kangaroo logo from cottonseed.

While a portion of their sheep flock ate the ration, Wendy took a photo above with her drone and posted it to her Bulldust_and_mulga Facebook page.

In it, she said: “Australian made! Cottonseed grown in Australia, being used to help feed Merino sheep, which are growing fine wool, (that sustainable and renewable fibre,) as well as lambs which will grow up to be wool growers themselves, or eventually a source of food for hungry people.

“People have shown Aussie farmers a fantastic amount of support during this drought, which has been heart-lifting to see, but what would be even better would be your continued support by buying Australian made when you shop.”

She believed a well-informed Australian public could play a big role in helping graziers in drought times, partly in the practical way outlined above, and partly through having a good understanding of what was needed and vocally supporting farming efforts.

“At the moment, people are saying whatever they want about us and our practices without being refuted,” she said.

Changes to Queensland’s vegetation laws are uppermost in Wendy’s mind – she has spent a lifetime growing sheep and wool in western Queensland and at the moment can only use one-third of their 500ha stand of mulga.

Some of that is stressed and losing its leaves and would be better off left alone but the red tape involved in making changes to their map is draining.

“Governments should be considering giving us more leeway to manage our country as we think best,” she said.

With so much concentration on drought solutions at present, Wendy said practical things such as increasing fuel rebates should be considered, which is one of the major things adding money to every transaction in droughted areas.

“We make choices knowing there will be dry times but people really shouldn’t have to donate for us, if there were policies like that,” she said.

Wendy also commented that care needed to be taken to ensure any form of drought support flowed back to communities as a whole.

“This gets back to the Australian Made thing,” she said. “There’s an awful lot of cheap stuff out there but is it helping Aussie farmers?”

Wendy’s graphic call comes as leaders from around Australia meet for a drought summit in Canberra, where Remote Area Planning and Development Board chairman, Rob Chandler has begged for support that will make a real meaningful difference to people in rural communities.

It also comes as RAPAD has submitted a report to the Queensland Drought Program Review, highlighting a need for government to change its reaction to drought and how it assists communities and businesses around drought.

‘More of the same’ or ‘business as usual’ is simply not an option, according to Cr Chandler.

“We are painfully aware the review cannot make the rain fall but it is an opportunity to put forward new ways to rapidly encourage social and economic growth of the RAPAD communities to sustain the region in these lean times and for the long run”, he said.

All seven councils of the RAPAD region have been fully drought declared since 2014, and the communities within the region are currently experiencing the worst drought in their history.

Related: More than half of Qld still in drought

Cr Chandler said his investigation had found that drought has highlighted underlying (sectoral and regional) imbalances and policy deficiencies (enterprise, industry and government), concluding foundational problems, not symptoms, need to be addressed.

“Essentially, we have had a long period of capital run down (human, physical, financial and the like) due to negative economic profits across agricultural sectors and rebalancing of government policies in ways that discriminated against rural and remote areas, compounded by naive competition policies and denial of trade realities and theories,” Dr McGovern said.

“Much can be done to restore financial/economic/societal viability but continuing approaches, policies and “quick fix” thinking that lead to today’s problems will not solve anything.

“Emergency response is important, but on its own is not enough – our communities deserve more.

“It needs to be accompanied by deliberate, long-term, strategic and coordinated support, delivered through the whole drought cycle, to help councils, businesses and communities prepare for drought, cope with drought when it is happening, and recover rapidly afterwards.”

“What’s need from here is for government pick up the reins and drive change and look forward to future opportunities to collaborate on building a prosperous future for outback Queensland,” Cr Chandler said.