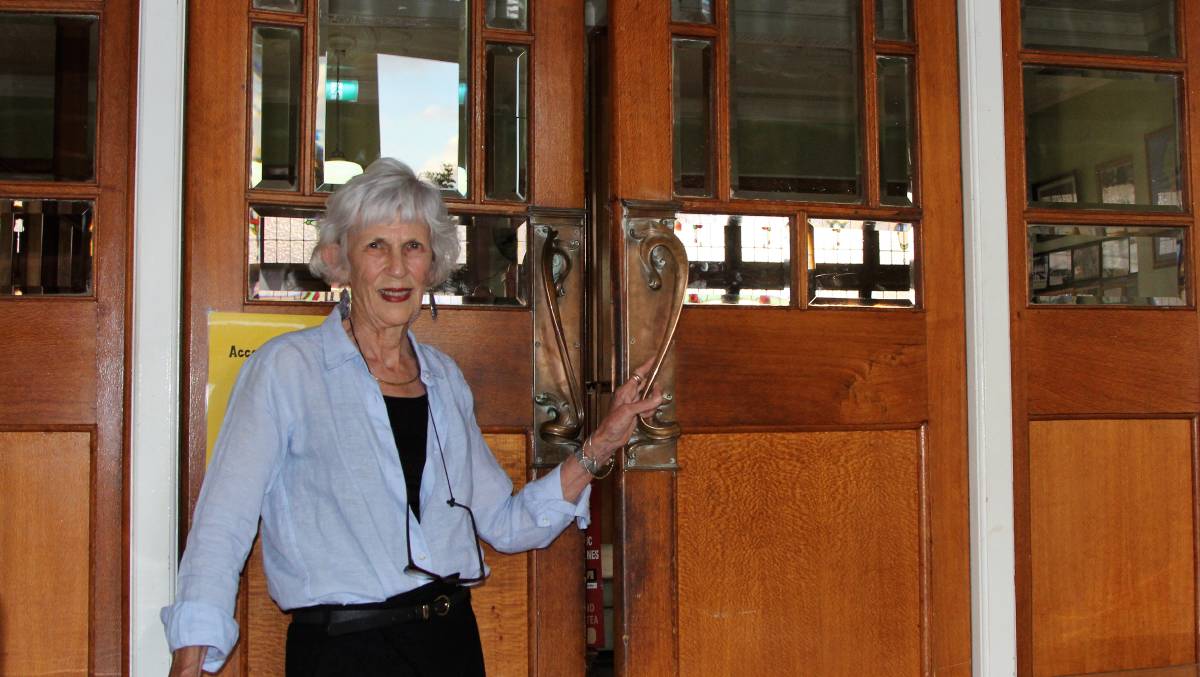 History revealed: Author Fran Harding at the entrance to the foyer of the Hotel Corones in Charleville. Pictures: Sally Cripps.

From a fishing village in Greece, Harry Corones, together with his nephew Jimmy, got to play host to royalty, rock stars and everyone in between, in the grand Hotel Corones in Charleville, carving out a life that rivaled any Hollywood blockbuster.

Hotel Corones – neither outback Queensland nor outback Australia had ever seen anything like its opulence when it stood complete in Charleville in 1929.

The luxurious hotel, to become one of the bush’s most famous tourist destinations, ran the length of an entire block in the town’s main street, and was the product of Greek migrant, Harry Corones, who himself became an institution in western Queensland.

Harry, his nephew Jimmy, and the rich history of the almost-100-year-old hotel have been chronicled in the pages of a new book that was launched during Charleville’s 150th anniversary celebrations.

Called The Accidental Australians - Harry & Jimmy Corones, the lively social history has been written by another of the hotel’s former owners, Fran Harding.

Fran, who owned and ran Hotel Corones with her husband Gordon from 1985 to 2001, said the book was a project that seemed to choose her.

“I have always been interested in stories. During our time as owners of the hotel the incredible tale of Harry and Jimmy’s accidental arrival in Australia, then Charleville and all that came after, got under my skin,” Fran said. “It wasn’t a case of if these walls could talk — they did talk, to me.” Fran Harding looks over some of the images collected of the grand history of Hotel Corones.

It’s a story that is bound to resonate with many western Queenslanders with their own experiences of the hotel, the ‘Raffles of the West’.

Over 100 people attended the launch in the hotel’s grand foyer last Friday, including Harry “Poppa” Corones’ daughter, Nina Geary, who made the trip out from Toowoomba.

“It’s been a special place in the lives of so many.

“They felt, as I did writing it, that the story has at last been captured and won’t be lost.”

Read more: A rich history in the walls of Hotel Corones

Writing the book took Fran nearly two decades and she described it as her love letter to Poppa and his ‘Taj Mahal on the Warrego’.

When she and her husband bought the rundown hotel in the late 1980s, she had no idea of the extraordinary story that was hidden beneath the peeling wallpaper and ugly carpet.

Despite a plan to seek out opportunity in America, 22 year-old Harry and his 11-year-old nephew Jimmy arrived in Australia in 1907.

Two years later, on the promise of a job running a small cafe, they stepped off the Western Mail train in Charleville.

Harry began building Hotel Corones in 1924, taking five years to complete it. When finished, it was replete with a grand silky oak staircase and custom-made furniture, marble floors, the biggest bar in the southern hemisphere, a jazz hall, and a silver service restaurant.

“The more I learned about Harry and all the things he’d done, it wasn’t just a good story, it was an extraordinary story,” Fran explained. “He was a successful businessman, yes, but he also achieved so many history-making firsts.”

Harry Corones was the first Greek to hold a hotel license in Australia.

His was the first hotel in the state, outside of Brisbane, to have ensuite bathrooms.

He was the first caterer for Qantas, and Charleville became the regular meal stop for Qantas planes ferrying passengers around Queensland.

“Harry was also an enormous character who became famous for his comic spin on Australianisms,” Fran said.

Writing The Accidental Australians was a long and challenging, but rewarding process for her, interviewing more than 60 sources, including Corones family members, hotel staff and patrons in order to recreate the stories captured within the book’s pages.

“This has been a passion project,” she says. “I have put my heart and soul into it because I know how important it is for this story to be documented.”

There were plenty more fleeting memories shared on Friday, Fran said, such as memories of starched tablecloths that left a strong impression on a small child in years gone past.

“It was an emotional day for Nina too, to see the esteem her father had been held in,” Fran said.

Click here to find out how you can obtain your own copy of The Accidental Australians.