Farmers have called for a 'drought trigger' to assist families cover education costs during times of severe drought. 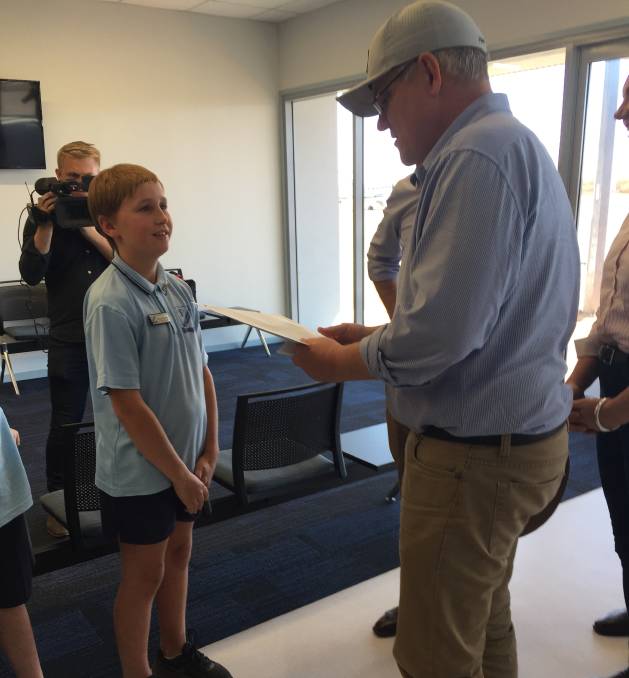 Quilpie school children greeted the Prime Minister, Scott Morrison, when he arrived at the airport on Monday.

The need to provide geographically isolated families with more assistance to cover education costs was hammered home to the Prime Minister on Monday.

Scott Morrison was touring a part of western Queensland that has been in drought for over five years and was told the cost of educating children at boarding school was having a dramatic impact on many families.

Stephen and Annabel Tully, who were hosting the Prime Minister, live 80 kilometers from Quilpie which only has a P-10 school.

They have five children, three of whom are currently at boarding school in Brisbane while the youngest two are studying via the School of Distance Education from Bunginderry.

The Tullys acknowledged they did have the option to educate their children via Distance Education all the way to year 12 but said they wanted to give their children an opportunity to attend a physical school.

They are currently spending around $50,000 annually to educate their three oldest children.

Ms Tully, who drives the 80km to work as a nurse to provide off-farm income for the family, became emotional when speaking to the Prime Minister about the tough choices some families are making.

“I guess the challenge now, is do you keep them in boarding school or do they not be educated?” she said.

Mr Tully said there needed to be a “drought trigger” to help families with limited education options during times of drought.

“We are talking about the people who really have no other options,” Mr Tully said.

“There are parents right now, who are having to decide which child goes to boarding school because they can’t send both, or pulling kids out - these are decisions no parent should have to make.”

Mr Tully said access to education was a fundamental right.

“Traditionally governments have looked after law, order, health and education - it’s a basic function of government.”

The Tully’s calls have been backup by the Isolated Children’s Parents’ Association who argue the issue also impacts families living in isolated towns.

“Some people think ICPA allowances are just for people who live on properties but that’s not the case – its for people in the towns too,” she said.

“These days it’s not accepted practice to finish school at the end of primary school or year ten and go out to work. Every parent aspires to see their children finish school or have a formal education.” “If they can’t do that in their hometown they often move away and they never come back.”

In Queensland, Ms Martin said the state government had also made available extra assistance through the Living Away from Home Allowance (LAHA) which for two years provided an additional $1500 per child to cover tuition and travel expenses.

Ms Martin said that funding ran out at beginning of 2018 and had not been renewed despite “vigorous” lobbying from ICPA Queensland.

“We shouldn’t have to keep lobbying federal and state governments for extra assistance every time there is a drought,” she said.

“What we need to do isn't just about dog fencing, and all of that's important, but kids still have to go to school and getting kids to school can't be causing stress and heartbreak for parents,” he said during the visit to Bunginderry, Quilpie, on Monday.

“So there's no end, it would seem, at the moment to the issues that we have to sort out and coordinate here and that's why Major General Day's job is so important.

“It's to work across everything from education to human services to coordinating with the States, to my old department in Treasury and the tax office and places like that.

“It's a whole-of-government response and then working with the States. We are going to try and talk to each other a lot better because that's a big part of the solution, all the governments working together.”