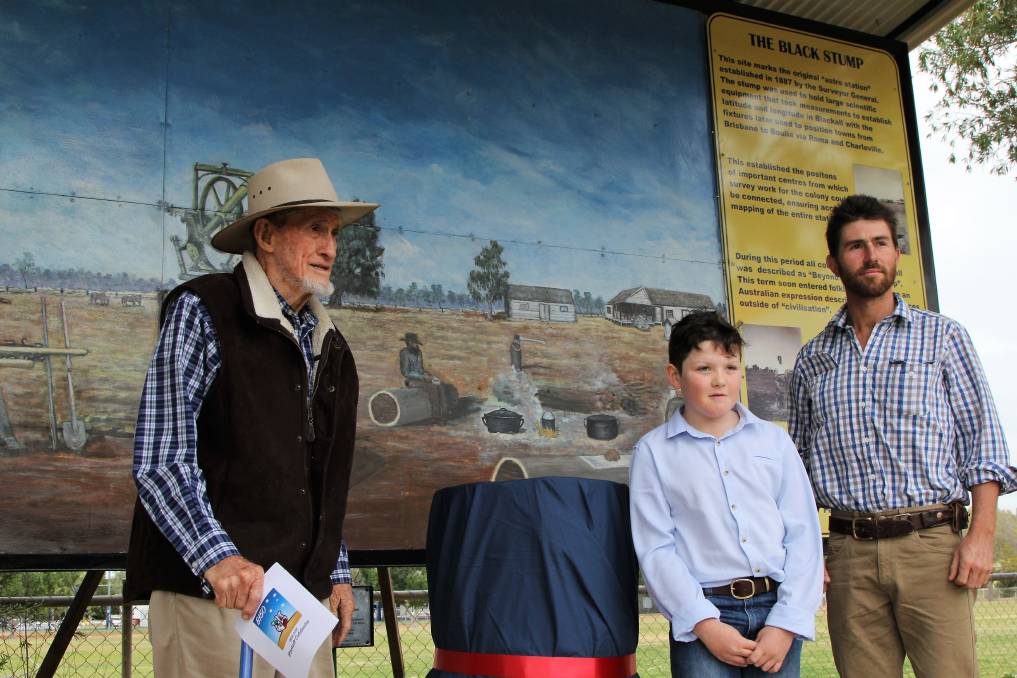 The Black Stump at Blackall stands in the middle of a culture that has given Australia its rich heritage and it will continue to make its mark well into the future.

Being beyond the Black Stump is normally an indicator of remoteness but the Black Stump at Blackall stands in the middle of a culture that has given Australia its rich heritage and it will continue to make its mark well into the future.

That was the promise made by Blackall-Tambo Regional Council mayor, Andrew Martin, at the unveiling of the town’s new Black Stump marker on Saturday, 150 years to the day that the central west Queensland town was first proclaimed.

The new marker, created by acclaimed marble and bronze sculptor, Phillip Perides, best known for The Young Bee Gees statue at Redcliffe and the Darren Lockyer bronze at Suncorp Stadium, stands on the site of the well-known Blackall tourist attraction.

In 1887, a tree stump on that same spot was used by a group of surveyors to rest a heavy theodolite so they could fix the position of towns from Brisbane out to Boulia via Roma, Charleville and Blackall, and enabled the mapping of Queensland on a more accurate basis.

At some stage it was burnt, and stood in its charred, deteriorating state at the back of the Blackall State School grounds until a stump of petrified wood was placed there in 1988, Australia’s bicentennial year, in recognition of its significance to the nation’s heritage. Cr Martin told Saturday’s crowd that the new installation marked the start of the next 150 years for the town.

“We’re proud to celebrate the rich cultural heritage we’ve passed on to the nation,” he said. “It all started in places like this. The Black Stump is a lynchpin of how and why we became a settlement.”

Helping to unveil Blackall’s newest sculpture was past shire chairman and historian, Fred Rich, who said the stump was at the centre of a nine mile square.

As well as complimenting the regional council for reconstructing a valuable piece of history, Mr Rich recalled some of the Blackall’s life-changing moments, such as the times its men went to war, and the coming and going of the railway line.

Also on the podium was one of Blackall’s newer residents, Sam Hart, who spoke on behalf of young people who had chosen to make their home and life in western Queensland.

“Through the kindness of Blackall, we’ve been able to establish a great life here – we can’t wait for you to explore everything about our town,” he said.

Beyond the Black Stump comic strip artist, Sean Leahy was back in town to unveil a new cartoon mural standing beside the 1993 mural depicting the 1887 scene that was created by Bob Wilson.

Mr Rich’s newest publication, Blackall on the Barcoo, was available for sale following the opening.