One of the signs that made up AgForce's urban engagement strategy.

The rural mobilisation from groups as diverse as the Green Shirts Movement and Farmers for Climate Action comes as new polling ahead of the Super Saturday by-elections shows that federal Labor is facing a historic defeat in the seat just to the north of Brisbane.

Labor’s Susan Lamb won the seat centred on Caboolture in the last election.

Saturday’s poll in an urban seat that still has strong connections with food production is both seen as an opportunity to put the importance of farming in front of city voters and as getting issues on the federal agenda in the lead-up to the full federal election either later this year or next year.

AgForce began the trend a month ago, armed with urns of coffee, sandwiches and Every Family Needs a Farmer stickers, manning a stand at the Sunday Caboolture Farmers Market amidst tubs of honey, racks of freshly dug veges, and mobile coldrooms of meat. 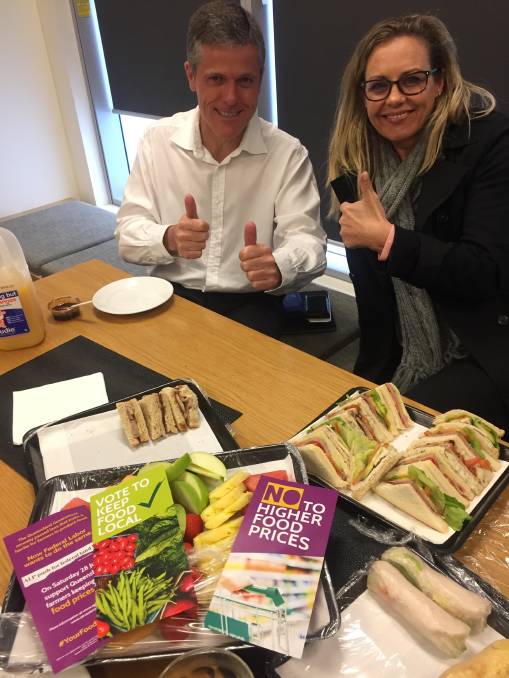 AgForce CEO, Michael Guerin, and AgForce's vegetation management committee member, Tracy Finnegan, with some of the 20,000 pamphlets they handed out in the Longman electorate.

“We had mushroom growers smashed by floods tell us how they’d fared, and issues of urban development creep affecting strawberry growers.

“We went to the Waterford cattle sale and that gave us the opportunity to talk about Vegetation Management Act changes.

Although Longman is a federal seat, Mr Freeman said it was important to point out that the ALP had suggested they wanted to put vegetation management issues in the Environmental and Biodiversity Conservation Act.

“We asked, do we need that layer on top of local and state laws,” he said. Corflutes with messages supporting the aims of Queensland farmers were a feature of Caboolture Farmers Market stalls.

While AgForce will back away from having a presence in Longman on polling day, saying they were strictly apolitical, the Green Shirts Movement hopes to make farmers very visible to the wider community on the day.

Begun in the last fortnight, in the wake of the Labor government’s vegetation management changes, the group’s Facebook page has gathered 2600 followers in eight days, which is what they hope to build on this Friday and Saturday.

One of 10 administrators, Clermont’s Michelle Finger said a number of supporters, led by State of Origin great and Mackay regional councillor, Martin Bella, had travelled to Longman to have conversations and reconnect with urban people.

“We’re not affiliated with any political party but we’ll be suggesting to people that they put Labor and the Greens last and choose whoever else you like first,” she said. “Their policies are our immediate focus. We see this as a message to Bill Shorten that farmer bashing is not a good political strategy.”

She said while land-clearing had been the catalyst for the movement’s creation, there were a lot of other “fake green” issues at stake, saying the Paris climate accord was at the heart of the crackdown on vegetation management that landholders were bearing the brunt of.

The accord and climate change were at the heart of a forum held by Australian Farmers for Climate Action at the Caboolture Memorial Hall last Saturday, addressed by Longreach grazier, Jody Brown, among others. Queensland coordinator, Michael Kane, said the hall had been packed to capacity with 90 attendees, describing it as a really powerful event.

“To go into a rural-urban demographic and have farmers lead the call for climate action – it’s gone beyond politics now,” he said.

While it was open to all candidates to attend, Mr Kane said neither the LNP nor ALP representatives attended, nor the Prime Minister, who was in the area on the morning.

“It’s a marginal seat – I would have thought it was critical for them to appear,” he said. “None of the major parties are acting quickly enough, considering more than half the state is in drought and it looks like we are moving back into an El Nino.”

Longreach’s Jody Brown spoke about the impact of drought, on people’s psychological state as well as on their land.

“There’s concern about groundwater in light of that, and water drying up with those big mines next door,” Mr Kane said.

Another speaker had been local strawberry grower, Kerry McMartin, whose back paddock used to be productive but is now 30cm under water in king tides.

“This is consistent with sea level rise predictions,” Mr Kane said. “Nor are there enough cold days a year – farmers are now having to propagate strawberries in the freezer.”

He said while the national movement of farmers, graziers and agricultural industry leaders was strictly apolitical, they were encouraging people to look at parties’ policies.

“We wanted to put climate change on the agenda,” he said.

“This is the run-up to the federal election – climate change and Adani are critical issues.

“If the Adani carbon bomb goes off in the Galilee Basin, there’s nothing via carbon sequestration that farmers can do to change it.”