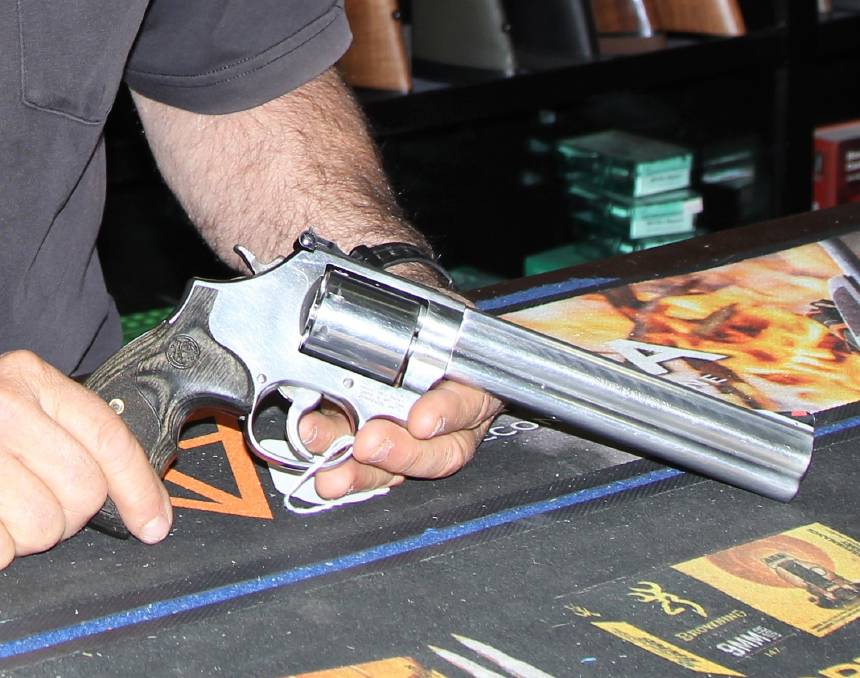 Bullseye: The practicality of pistols in certain terrain and circumstances has been successfully argued by Quilpie's Danny Salmon. Picture: Sally Cripps.

A decision by a Quilpie grazier to fight the Queensland Weapons Licensing Branch’s rejection of his concealable handgun licence renewal has resulted in the refusal being overturned.

A decision by a Quilpie grazier to fight the Queensland Weapons Licensing Branch’s rejection of his concealable handgun licence renewal has resulted in the refusal being overturned.

This is a departure from the trend of the last few years that has seen applications and renewal requests for category H firearm licences rejected in increasing numbers and has been hailed as a win for common sense.

It is also seen as a counterpoint to the Weapons Licensing Branch’s argument that it has been following Queensland Civil and Administrative Tribunal benchmarks set in previous judgements, when refusing handgun licence applications.

Earlier in July, QCAT handed down a decision in favour of Daniel Salmon of Ardnoch, Quilpie, who has held a category H weapons licence since 1996.

Mr Salmon sought renewal of his licence in May 2017 but it was rejected in September, on the grounds that the Queensland Police Service wasn’t satisfied there was a genuine need or reason to hold a handgun licence, arguing there were alternate means to meet his needs by using a weapon of a different category.

Mr Salmon engaged solicitors to argue the case that he had a genuine reason for possessing the Smith & Wesson .22 calibre revolver, and that it was necessary for his occupational requirement for rural purposes.

During the hearing, he was able to explain satisfactorily to the tribunal that not only was it necessary for him to use a motorbike rather than a quad bike in the mulga sections of his 24,300ha property, but that in the event of attacks by wild pigs, using a long-arm rifle to defend himself would mean stopping and steadying his motorbike, wasting valuable time.

“The applicant...submitted that alternate methods such as a sling, rifle mount or carrying case would be impractical and/or impossible through Mulga country because transporting such a weapon would pose a danger to the applicant or livestock,” the judgement read.

“The Tribunal accepts that long-arm firearms, whether mounted, carried in a shoulder/cross body holster or are of a fold-down type, necessitate bringing the motorbike to a stop so that the weapon can be accessed, or assembled, and then operated/discharged with both hands on the weapon.

“The Tribunal is satisfied that seconds of time delay in a charging feral pig circumstance could be detrimental to the applicant’s safety in carrying on his business, and that such stopping and starting could unduly interfere with and extend an already intense mustering process.”

The Weapons Licensing Branch had argued to the tribunal that Mr Salmon’s needs could be met with a fold-down rifle, and that most of the property was accessible.

QCAT Member Clifford handed down his decision after both parties appeared before the tribunal in June.

A win for common sense

The QCAT decision was hailed by AgForce firearms spokesman, Graham Park, as a win for common sense.

“The decision is very fair,” he said. “It took into account the needs of a genuine primary producer.

“Mr Salmon raised issues that are relevant to primary producers in many areas of the state, relating to terrain and the impracticability of long-arm firearms in certain circumstances.

“This is a win in the sense that it clearly shows the appeal process can work if you have a clear case.”

In light of Weapons Licensing’s reliance on previous QCAT judgements as justification for licence refusals, Mr Park said he now looked forward to seeing how the latest result would be incorporated.

In May 2016, the branch’s Sergeant Steve Steenstrup told Queensland Country Life a 2014 tribunal ruling had provided a benchmark for Weapons Licensing Branch decisions.

“Our officers ask what the law says. The QCAT said this, so we follow. If there’s been any change (to the granting of licences) it’s because of court decisions,” he said at the time.

A spokesman for the Queensland Police Service this week said the new QCAT finding had been noted and was currently being considered.

Police Minister, Mark Ryan, said anyone who was dissatisfied with a ruling by the Weapons Licencing Branch was entitled to appeal the decision to QCAT.

“If QCAT decides an error has been made and the appeal is successful that is just as it should be,” he said. “That is the process and it is designed to give all firearms owners a fair hearing.”

QLD primary producers and Cat H. Guidance material has been produced at last. Thank you to Insp Adam Guild for pushing this through. Shooters Union and... https://t.co/AhQDwytLHV

Mr Park said the message for the state government in the latest QCAT decision was that primary producer needs should be taken seriously.

He said the suggestion that the state government played no part in Weapons Licensing decisions was a cop-out.

“Their tone helps structure policy,” he said, recalling former Police Minister, Bill Byrne’s outburst in parliament in 2016, describing primary producers as “lone cowboys, with the pistol strapped to the hip” when dismissing the idea that a pistol was a legitimate agricultural tool, at a time when the decrease in category H licence approvals was being noticed.

As reported by the Courier Mail in January, the number of concealable weapons licences issued, renewed or replaced in Queensland dropped from 3570 in 2014 to at least 2508 in 2017.

The number of refused applicants went up by almost 200 per cent during the same period, from 81 to at least 227.

Mr Byrne’s comments outraged primary producers and opposing political parties alike, setting off a string of manoeuvres in parliament last year, culminating in the failure of a Katter’s Australian Party motion for primary producers to have “as of right” use of handguns.

Police Minister Ryan told an estimates committee hearing that while Queensland fundamentally followed the National Firearms agreement, it varied “in certain instances...and one particular instance is in category H weapons”, in which he said primary producers were able to hold category H weapons on a case-by-case basis, unlike other states that didn’t issue the licence to primary producers at all.

July’s judgement of Mr Salmon’s case agreed that circumstances had to be considered on a case-by-case basis.

“In this matter whilst it may not be impossible to utilise another weapon other than a concealed one, the Tribunal is satisfied that in the applicant’s circumstances as a sole weapon holder, operating in such a large and inaccessible area against a background of an intense mustering process and the high possibility of the presence of charging feral pigs, renders the use of alternate weapons as described and or suggested by the Respondent impractical,” it said.

Mr Park said that was a very valid point that went to both sides of the licence debate.

“I don’t think anyone thinks there should be a blanket approval or a blanket refusal,” he said.

“I hope Weapons Licensing will treat each case on its merits and follow the most recent QCAT example by approving legitimate applications or renewals.

“I would encourage any primary producer who feels they had a legitimate need to apply and were rejected, to see that this shows the appeal process works.

“I encourage people to supply Weapons Licensing with sufficient information to make a decision.”