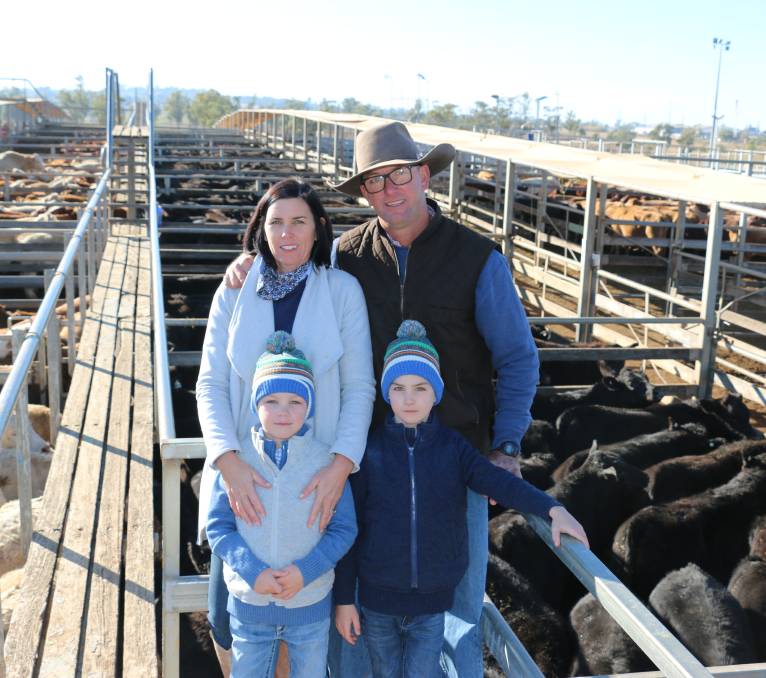 Julie and Jeremy Shaw with sons Leo and Henry were on hand to see their weaners sell at the Roma Saleyards. Photo - Annabelle Murphy, Roma Regional Council.

DESPITE the tough market due to the prolonged drought over most of eastern Australia, the Shaw family, JS Grazing, Injune, was thrilled with the results of its weaner turnoff sold through the Roma Saleyards on Tuesday.

Family spokesperson Jeremy Shaw said with so much of southern Australia in drought the result was extremely pleasing.

“In the past a lot of interest in our turn-off has been from restockers in the southern parts of Australia, so to achieve these results was unreal,” Mr Shaw said.

He said the price the steers achieved was about where they were hoping to be, but the heifer prices were a very pleasant surprise.

Mr Neven said the eight to 10 month old calves had been weaned up to eight weeks ago. They had been educated through the yards and returned to the paddock for the past six weeks.

“Many of the buyers of the steers were repeat buyers including the major feedlots such as Whyalla Feedlot at Texas, and Stanbroke Beef, who specialise in the Angus branded beef market,” Mr Neven said.

“It was pleasing to see the heifer market was as strong as this result.

“The heifers were sought by both commercial Angus breeders and Wagyu breeders looking to breed the first cross article.”

Mr Neven said one buyer chased some of the heifers with the view to breed quality steers suitable for competing in carcase competitions.

Over the years the Shaw family has invested heavily in quality Millah Murrah Angus genetics.

“The Shaw family would pay on average $21,000 for bulls to be used in their commercial operation, and this investment has certainly paid dividends," Mr Neven said.